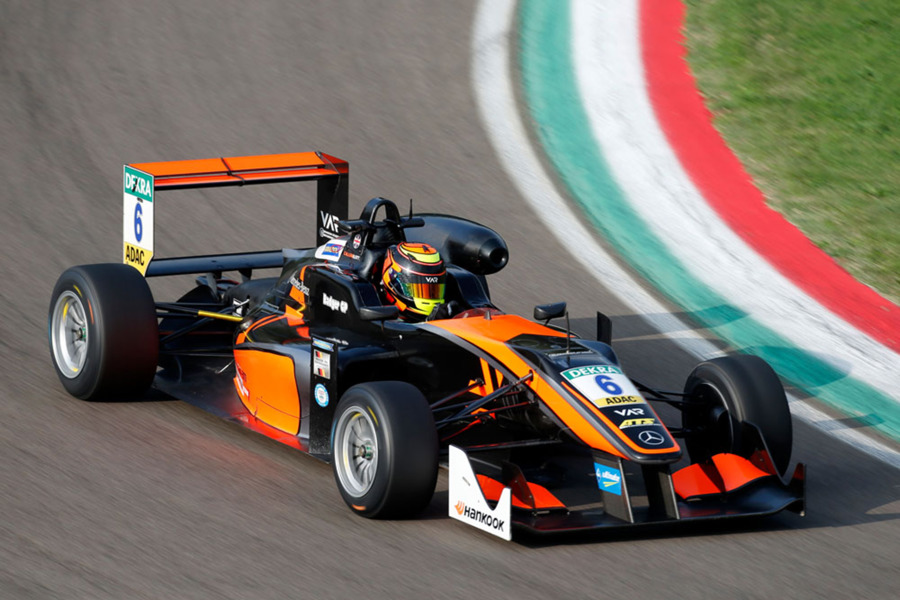 Van Amersfoort Racing returned to the historical Autodromo Enzo e Dino Ferrari for the penultimate round of the FIA F3 European Championship. We came home from Imola in Italy with one podium result: a well-deserved third place for Callum Ilott in his Dallara Mercedes-Benz at the final race on Sunday. Also the other drivers made their mark; French F3-rookie Anthoine Hubert scored three top six results, Harrison Newey was among the fastest ten twice. Throughout the weekend the policy about keeping the track limits played a major and negative role.

Racing the Autodromo Enzo e Dino Ferrari differed from the last encounter back in 2014. In their ambition to promote more decent racing in the European F3 the FIA is maintaining track limits more strictly. This had a big impact on the atmosphere in Imola. The lack of support by sufficient technical equipment caused a ongoing stream of discussions with the stewards. In one of the sessions a total of 84 penalties were fined for exceeding track limits, in a field of 19 F3 carsâ¦ Hopefully the FIA works out a workable scenario for the 2017 season.

With two restarts the young F3 guns had to stay extra focused. Anthoine, our French rookie, did not lost out on position despite the chaos. He collected 10 points finishing 5th. Harrison Newey kept also cool in this little Italian drama. The Briton took off in 12th position to enter the top 10 when the flagged dropped. Harrison grabbed 2 points after securing 9th position. Pedro Piquet was less fortunate. The Brazilian spun off at Rivarra, causing a safety car interference and a retirement. Callum Ilott went off road at Tamburello side winging his car resulting a p15.

In the second encounter at Imola Anthoine and Harrison raced each other for who would be best Van Amersfoort Racing driver. The Briton got a hold on fifth position twice, but lost out on momentum at the last restart. An entangle between him and Nick Cassidy handed Anthoine the opportunity to slide into sixth position. Nevertheless Harrison also sealed his second top 10 result, by finishing eight. Pedro overcame his dnf in the first race with a decent twelfth position, while Callumâs race ended in the gravel trap at Rivazza.

And he bounced back from his unfortunate driving error in the second race. Callum made his weekend worthwhile by scoring his sixth podium result of the season. In 22 hot laps the Briton battled for second position with George Russell meanwhile outpacing the competition behind with almost 5,5 seconds at the finish line. This third position was a deserved reward after a smart race. Anthoine continued his string of point scoring results. He took another sixth position, collecting 8 championship points again. Harrison Newey damaged his car over the curbs and had to retire. Pedro Piquet ended this Italian Formula 3 episode in 14th.Â