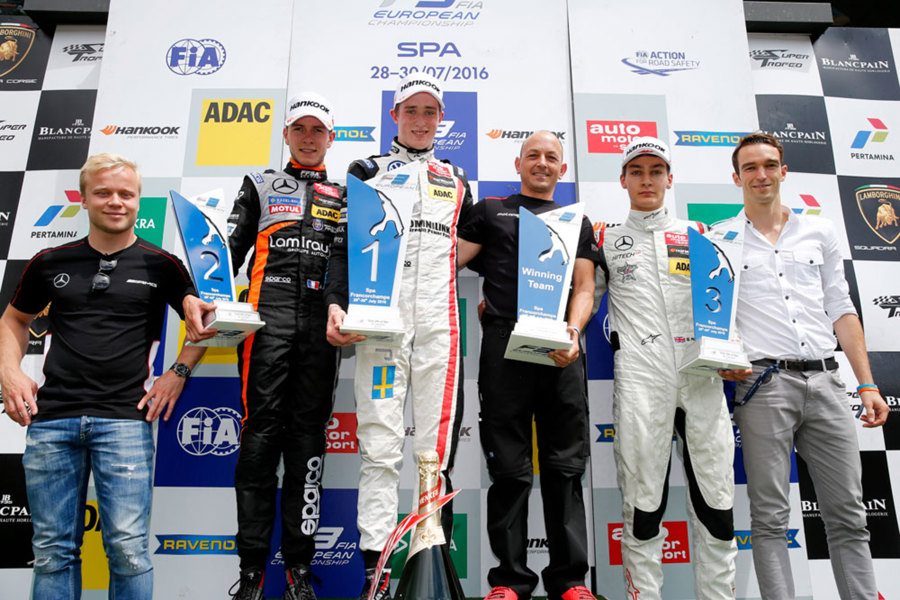 Pushing the boundaries at Spa-Francorchamps

At Spa-Francorchamps, the most demanding circuit of the world, Van Amersfoort Racing managed to put down a strong team achievement. Rookies Harrison Newey and Pedro Piquet scored their best personal result in Formula 3. Anthoine Hubert finished second in the final race. We also scored a 4-5-6 result and collected 3 rookie podium results at the 7th round of the FIA F3 European Championship.

Racing in the Ardennes is always an exciting cocktail: the lay out of the Belgian F1 track mixes high speed sectors, slow corners and demanding braking zones with characteristic unpredictable weather. Rain is never far away in the Ardennes. It makes the 7.004 km Spa-Francorchamps circuit one of the most beloved tracks by racing drivers from all over the world.Â

In a rain soaked first qualifying session Harrison Newey showed his skills in the wet by setting the fifth time; the best qualifying result for the F3 rookie so far. In the dry qualifying session for the second and third race Callum Ilott and Antoine Hubert secured starting positions in the top 8. The Briton overcame a false start of the weekend after a technical issue in qualifying one.

After a long run behind the safety car because of the terrible rain showers the young F3 guns battled their first dual at Spa over 6 laps. Harrison (18) proved to be a rain master again. The Formula 3 rookie finished sixth after a dauntless drive under heavy conditions, marking his personal best result in F3 so far. A nice extra: Harrison stepped on the podium as the second best Rookie.

Starting from behind both Callum as Pedro ran out of the time in this short tailed race to climb up into to the top 10. Anthoine got hit by another driver resulting in a flat tire. It occurred just after the pit entry, so the French rookie was forced to park his car to avoid structural damage to his car.

Pedro was undoubtedly our star of the second race. The Brazilian rookie overcame a crash in the first free practice and missed out the second practice plus the first qualifying due to the repairs on his race car. In an dry encounter at the Spa track the 17 year old rookie worked his way up from 15th passing and out braking his opponents in great style. Pedro was rewarded with a splendid sixth place, his personal best result in F3 until now.

Anthoine translated his progress into a solid fourth place after his start from p7 and he found himself on the runner up spot of the rookie podium! Callum (17) bounced back from his false start of the weekend with a fifth place. The 4-5-6 finishing order by Van Amersfoort Racing drivers is something special, giving us the confidence that all our cars have the speed to be up front. Also Harrison made good progress by starting 16th and gaining four positions before the flag dropped.Â

For the third time this season Anthoine (19) stepped on the podium. The French F3 rookie is getting more and more comfortable in his Dallara Mercedes-Benz. In the final meeting at Spa he kept cool and worked his way up from fifth on the grid into second after a very mature drive. It meant a double podium, because Anthoine also was honored for being second rookie. In the rookie championship he is now runner up, while he also entered the top 10 in the driversâ championship after his good results at Spa.

After a superb start Callum got into a racing incident with Ben Barnicoat at the Les Combs corner while battling for second position. The floor and side pod of his car got damaged so heavily that he was forced to retire. Pedro and Harrison stayed out of trouble this race and finished in respectively 14th and 12th position.