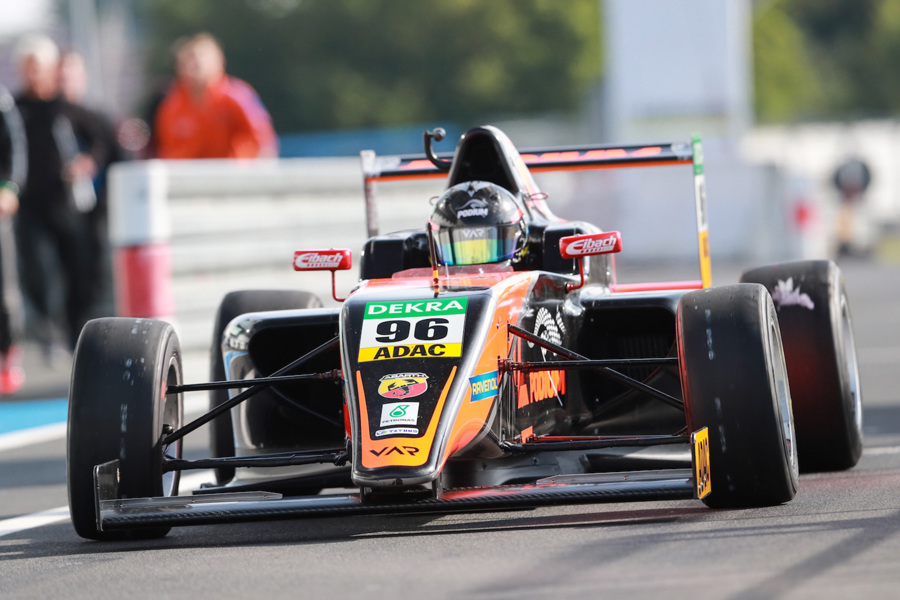 Keeping in charge at the Nurburgring

Nurburg/Zeewolde, 8 August 2016 - At the Grand Prix track of the Nurburgring our Formula 4 squad battled out the sixth round of the ADAC Formula 4 championship. With a win and a runner up result Joey Mawson managed to keep a healthy lead in the championship standings. Moritz Mueller-Crepon performed strong in the third race by finishing seventh, Kami Laliberte went home with a top ten result, while Leonard Hoogenboom also showed good progress at the Ring.

The results of the qualifying sessions at the Nurburgring pretty much tell the story of this years run for the championship. It looked like Joey conquered the pole position for both races, but his rival and former Van Amersfoort Racing driver Mick Schumacher managed to grab the pole for race 1 in the dying seconds. With a margin of only 0,028 sec.! Our fast Aussie is in the lead, but there is no time to take it easy.

For almost the entire race Joey (20) kept the pressure on Mick Schumacher. After the lights went out, the starting order kept in place. The championship leader opened his trick box and launched many attempts to pass polesitter Schumacher. His opponent did not make a mistake, so Joey looked at the bigger picture and settled for second.

From 14th on the grid Moritz found the speed to move up in the rankings. With a string of strong laps and clever maneuvers the 19 year old Swiss finished just outside the top 10, in eleventh place. Canadian Kami (16) and Dutchman Leonard (17) managed to keep their positions in the midfield at this technical demanding track.

Joey collected his seventh win of the season at the Nurburgring after a furious fight with Mick Schumacher. With a strong start from pole it was Joey in the lead, immediately followed by Schumacher who leaped into second place from p3. The thrilling battle for the lead resulted in contact between Joey and Schumacher, who shortly conquered the lead.Â

After a review of the stewards Schumacher was handed a drive through penalty. Joey also overcame a safety car interference and could celebrate his 6th victory of the season. While Schumacher finished 15th scoring no championship points.Â

Our other three young guns experienced a difficult second race of the weekend. Leonard finished where he started, in 17th, Moritz dropped back to p29 after contact with another car, while Kamiâs race ended after an accident in the first corner.

In the reversed grid start Joey opened the final race from 9th. The Aussie immediately gained some positions, just like his biggest rival Mick Schumacher did. After a safety car period midways Joey used the restart to move up further. It was the start of a battle with Richard Verschoor for fifth position.

Eventually Joey found his way past the Dutch rookie in the finale chicane, despite the championship leader was forced to cross the pit entry line after Verschoor did not leave any room. During the race the stewards decided to give Joey a drive through penalty for crossing that white line. It resulted in a 28th position and a no score, while opponent Schumacher collected second place.

At this third race Moritz warped himself back into the top ten for the second time this season. The Swiss young gun opened in 11th position and proved very focused at the restart of the race by gaining some positions. The result was rewarding: a strong seventh place including six championship points.Â

Kami combined good speed with some outstanding passing maneuvers. From 15th position the Canadian managed to finish in tenth, collecting a championship point for the fifth time this season. Leonard ended the visit at the Eiffel with 11th position. The best result of the weekend by the Dutch rookie who is endorsed by KNAF, the Dutch autosport authority.

Rob Niessink, CEO of Van Amersfoort Racing, is happy with the overall performance at the Nurburgring. âIt is a pleasure to see the progress of Moritz, Kami and especially Leonard, who joined our team during the season. As for Joey: he showed once again why he is leading the championship.âÂ  Concerning his penalty in the final race, Van Amersfoort Racing thinks it was a to harsh punishment concerning the circumstances.

âJoey carried much more speed into the final chicane than Richard Verschoor, so his overtaking maneuver was fully logical. After carefully studying the onboard footage, we conclude that Joeyâs crossing of the pit entry line was due the fact that he wanted to avoid contact with his opponent. The footage shows that his opponent did not let enough room. Finally we want to share our concerns about issuing team orders in this championship, like happened in the final race concerning Mick Schumacher. In our believe a feeder championship like ADAC Formula 4 should be about driving skills only.â