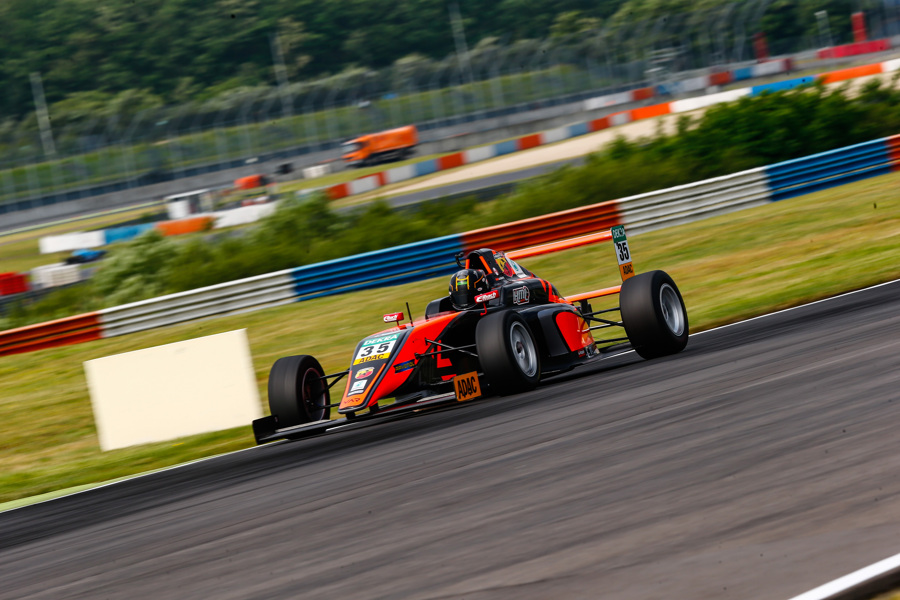 Encouraging team performance at the Lausitzring

Klettwitz/Zeewolde, 5 June 2016 - Work in progress paid off at the Lausitzring during the third round of the ADAC Formula 4 championship. Joey Mawson is still the championship leader after his 7th podium finish of the season. Kami Laliberte celebrated his first ADAC F4 podium result this year after finishing second in the first race, while rookie Leonard Hoogenboom collected a championship point for the first time. All in all a encouraging team performance by Van Amersfoort Racing (VAR), despite the very bad luck for Moritz Mueller-Crepon.

It was racing in the summer at the Lausitzring. At Saturday the temperatures at the track of 3,478 kilometers would reach as high as 30 degrees. In qualifying all our four young guns did an excellent job by setting fast times in their group, Canadian Kimi was the fastest, Aussie Joey 4th, Swiss Moritz 5th and Dutch Leonard 6th. It resulted in starting positions among the first 14 for the first and second race in a field of the maximum permitted 35 cars.

Kami (17) kept cool at the start from front row twice. After the start the race was stopped for nearly 20 minutes after a series of incidents involving ten cars. Among them was Moritz (17) who was eliminated by another competitor. Also after the restart behind the safety car Kami defended his second position until the checkered flag withstanding the serious pressure by Thomas Preining. Joey (20) collected decent points by finishing 6th, making up two positions in this shortened race. Leonard Hoogenboom, our 16 year old rookie endorsed by the Dutch motorsport authority KNAF, made a giant leap forward by finishing 10th, thus collecting his first championship point and securing the pole position for the final race!

And there was he again: our fast Australian Joey secured his 7th podium finish of the season in the shortened second race of the weekend. He started from front row and finished a half second behind competitor and former VAR driver Mick Schumacher. We will never know what would have happened if the race was not ended 3,5 minutes earlier due to safety car deployment. Rookie Leonard gained valuable experience again and finished 14th. Both Kami and Moritz were unlucky after incidents on track, resulting in a 28th and 29th position respectively.Â

The forces of nature had a big impact on the final race Sunday evening. 20 minutes before the start of the race a cloud burst changed the track into a whitewater. But the conditions got even more difficult. All cars started on full wet tires but after the sun returned the track dried so quickly that the rain compound faded away very rapidly. Joey was one of the victims of the very unusual circumstances. In his battle for the podium he damaged his front wing, had to make a pit stop and dropped back to 23th at the finishing line. Kami suffered from a collision as well and after a pitstop finished 24th. Moritz was even a bigger victim and after being hit by another competitor he had to retire with a broken suspension. Leonard gained a lot of experience under very difficult circumstance and endedÂ  up 12th.Â

Joey is still in the championship lead. After nine races the Aussie collected 152 points, three more than Mick Schumacher (149). The unofficial title of âhalf-time championÂ´ in the ADAC F4 is at stake at Oschersleben in two weeks (17th - 19th June).