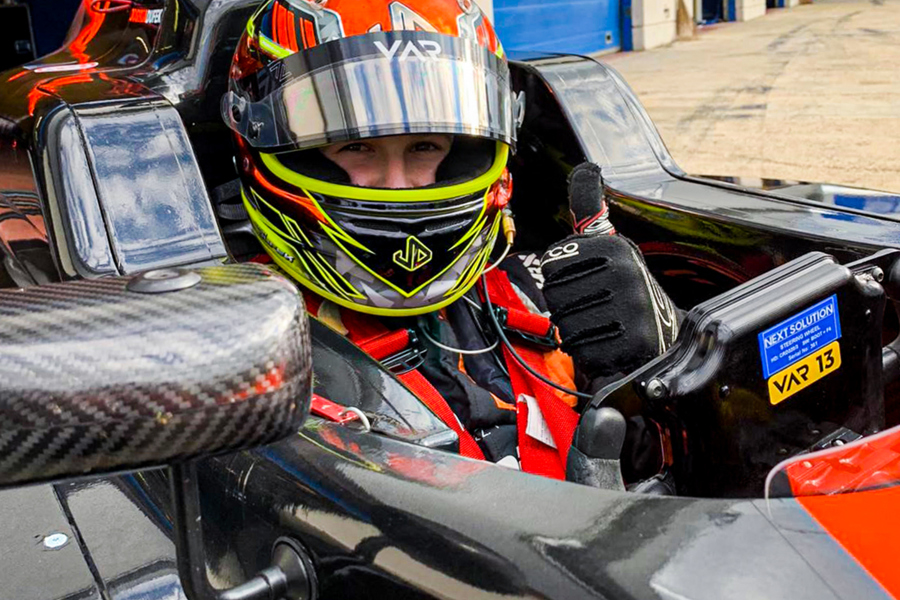 Zeewolde, February 25, 2021 – Van Amersfoort Racing announces the signing of Joshua Dufek. Racing under the Swiss flag, Dufek joins VAR for what is his second year of Formula 4 racing after last year’s debut in the Spanish F4 series.

The 16-year-old, London born Dufek teams up with VAR after a solid debut in the Spanish F4 Championship. Josh made the leap to F4 in 2020 after a promising career in karting. As an 8-year-old, he claimed both the Swiss National Mini Kart and the Vega Trofeo Championship in his debut season. From there onwards, he claimed many successes and steadily moved up the ranks to join the Sauber Karting Team in 2019. As part of Sauberâs Junior program, Joshua finished 5thÂ in the Italian Championship and claimed a respectable 9thposition in the WSK Euro Series OK. He further impressed by setting fastest qualifying time along with a heat victory during the 2019 CIK-FIA World Championship.

Dufekâs introduction to Formula 4 racing in 2020 was a successful one. Fourteen top-5 finishes of which three 3rdÂ and four 2ndÂ positions put him on P4 in the overall standings, only 1 point behind his competitor in third place. Today, he is ready to step up to the most challenging F4 Competitions on the race calendar; the German and Italian F4 Championship.

Joshua understands the challenge ahead of him; âMy first year in F4 was very exciting. It is such a different environment compared to karting, but I was able quickly adapt. Besides the biggest difference, obviously being the car, I really like the interaction thatâs needed with engineers and mechanics. 2021 will be extremely challenging, but I feel good about the championship. I have teamed up with VAR, arguably the best Formula 4 team out there. They have given me a very warm welcome and I feel at home already, which I believe is essential! I know the upcoming season will be hard work, but with the teamâs attitude and dedication towards putting up the best performance possible, I feel nothing less than confident!â Dufek jokes; âDo I need to mention Iâm eager for the season to start, because I obviously am, very much so!â

2021 will have Dufek compete in the full Italian F4 Championship, plus a number of selected rounds of the ADAC German F4 Championship. âBoth the Italian and German F4 series have established a reputation of being the most competitive starter series in Formula Racing. This combined program will therefore form the perfect step up for Josh.â Says Rob Niessink, CEO at Van Amersfoort Racing. Niessink continues; âItâs great to have him on board. He is a very eager young man who knows exactly what he wants, and more importantly, what needs to be done to get there. He performed well last year in terms of talent and speed, but also in terms of consistency. Especially in F4 it is important to find the right balance, something Josh doesnât seem to have much of a problem with doing! The first pre-season test is concluded and has clearly shown us that heâs ready for the season to start!â

The 2021 Italian F4 Championship counts 7 race events with 3 races each. The first round, scheduled for mid-May, happens on French soil at the circuit of Paul Ricard. The next three rounds are hosted by Italy; Misano at the beginning of June, followed by Vallelunga two weeks after. RoundÂ four takes place at the historicalAutodromo Internazionale Enzo e Dino Ferrari, Imola. After this, the team crosses the Austrian border for round 5 at the Red Bull Ring. The penultimate round is scheduled back in Italy, early October at the Mugello circuit. The season finale is hosted by the Monza circuit, affectionately known as the Cathedral of Speed.Â

The 2021 ADAC German F4 Championship also contains 7 rounds with 3 races each. Start of the season takes place at the Motorsport Arena Oschersleben. For the second round, the team crosses the border to compete at the Red Bull Ring in Austria. The third round takes places early July in the Dutch dunes of Zandvoort, followed by the NÃ¼rburgring and Lausitzring for respectively round 4 and 5. The sixth and penultimate round is hosted by the Sachsenring, followed by the season finale that takes place at the end of October at the Hockenheimring.