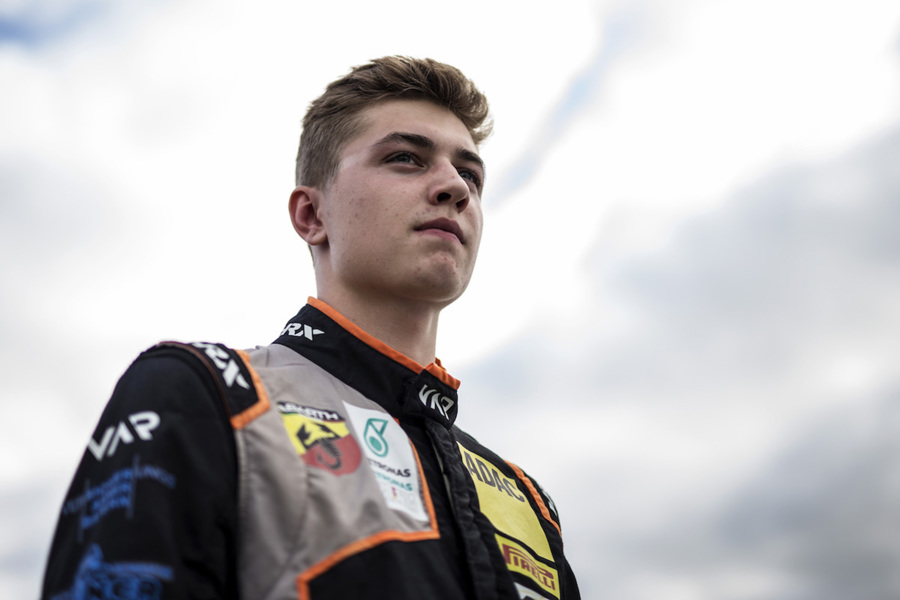 Zeewolde, February 27, 2020 – Van Amersfoort Racing is happy to welcome German Sebastian Estner back in their team for the upcoming 2020 Euroformula Open Championship. Estner will race alongside his VAR team-mate Alexandre Bardinon.

Sebastian is a familiar face to the Dutch squad, led by Frits van Amersfoort. It was in 2018 when he joined VAR for the first time during the last round of the Italian F4 Championship. Besides covering another round in that same Italian F4 series in 2019, Sebastian completed the full ADAC German F4 Championship with the black and orange outfit from the Netherlands in that year. Highlight of the season; Race victory on VARâs home soil at the famous circuit of Zandvoort, NL.

This year, the youngest of the two Estner brothers is taking a big step up by entering the Euroformula Open series. Sebastian says:Â âThe car is very different from what Iâm used to. It is certainly more powerful, but the generated downforce is the true impressive part. It is a complete different way of racing and it suits me very well!âÂ Â Estner continues:Â âI am really excited to be back with Van Amersfoort Racing. I have always felt very much at home and this feeling seems to get stronger every time I get in the car with them. I canât even put into words how much I look forward to the season to kick-off. We will be hitting quite a number of tracks that are new to me and from those, I look especially forward to Pau, not to mention Spa-Francorchamps!âÂ

The Euroformula Open series uses the Dallara chassis so well known by Van Amersfoort Racing. Up until the seriesâ cancelation back in 2018, VAR showed great successes with this very chassis in the FIA European F3 Championship and the FIA F3 World Cup, which is annually held in Macau. VAR continues to use and put its trust in the HWA power source, as done in the previous years.

2020 marks VARâs first entry into the Euroformula Open Championship. As stated in an earlier interview with VARâs CEO Rob Niessink, the time is right for Van Amersfoort Racing to enter the series. He says:Â âThe level of the championship is good and by joining the program we can offer our drivers continuation, a good next step on the motorsport ladder. Sebastian is a great example of this. He matured strongly during his time in Formula 4 and is now ready to compete at a higher level. We can accommodate this through our entry into the series and are very happy to have him on board again. We know Sebastian well and certainly believe in his potential to be making good progress during the season and perform at a competitive level. Needless to say, we are very much looking forward to get started together with Sebastian!âÂ Niessink shares that VAR is very positive about the future of the championship and is likely to announce a third driver soon.

Â The 2020 season of the Euroformula Open Championship contains 9 events with 2 races each. The season kicks off at the end of April at Paul Ricard. The team stays in France for the second round at the prestigious street-circuit of Pau. Round 3 of the championship takes place at yet another iconic racetrack: Spa-Francorchamps, draped over the hills of the Belgian Ardennes. After that the VAR EFO team visits the Hockenheimring in Germany, the Hungaroring near Budapest, Hungary and the Red Bull Ring in Austria. Afterwards the team moves down to Italy for round 7 at the circuit of Monza before continuing to the Autodromo Pergusa for the penultimate round of the series. The season finale takes place at the circuit of Barcelona, Spain towards the end of October.