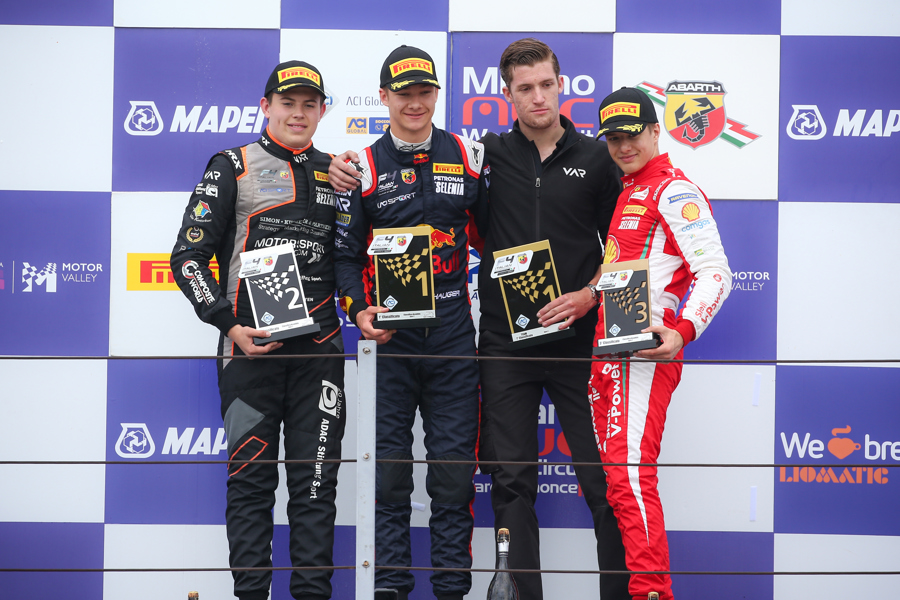 Winning in the rain at Misano

Once again, the weather was very non-typical Italian during the second round of the Italian Formula 4 Championship. After two races, which both took place under wet conditions, four out of six available podium positions were taken by Van Amersfoort Racing. The 1-2 finish of the second race with Dennis Hauger triumphing over his teammate Niklas Krütten was undoubtedly the highlight of the weekend. The only dry outings at the Misano World Circuit were the two free practice sessions. For both the two qualification sessions and two official races, rain tires were very much needed.  The continuous down-poor led to extreme harsh and dangerous conditions, leaving race-control with no choice but to postpone the third race to a later point in time during the season. In both first and second qualifying, all of our four drivers secured top 10 results. Dennis Hauger proved to be the fastest VAR driver in both sessions, clocking a third fastest time in Q1 and finished second in Q2. It goes without saying that, especially in these rainy circumstances, a third and second start position would prove to be invaluable. Early in race 1, which ran over 17 laps in the wet, both Hauger and Krütten took benefit from a touché between two drivers in front of them. Dennis was able to move from third to second position and Niklas gained two positions; moving up from P5 to P3. Niklas immediately forced pressure on his Norwegian teammate, but Hauger was able to maintain his position resulting in the first double podium of the weekend. Ido Cohen progressed to a respectable 8th place, scoring Championship points. Lucas Alecco Roy passed the checkered flag in 11th position but was pushed back to 14th in the rankings after having received a 10-second time penalty. In the second race on Sunday morning, Niklas Krütten made an excellent start and moved from P5 to P2. The German driver passed his teammate Dennis Hauger, who started from first row, right-away in the first corner. As soon as the race leader came into the pits for a change to slicks, the Van Amersfoort Racing tandem was in front. Niklas and Dennis fought for the lead almost the entire race. Both being on an equal pace resulted in hard but fair duels on a soaked track.  Two laps before the checkered flag Dennis Hauger managed to take the lead in what can be described as a chaotic race with multiple red flag situations. By doing so, Hauger secured his very much anticipated first win of the season in the Italian F4 Championship. With Niklas finishing second, an outstanding 1-2 was a highly appreciated reward for the complete Van Amersfoort Racing team. As in the previous rounds, Ido Cohen once again showed his skills. Under the harsh and wet conditions, the Israeli driver managed to gain no less than five positions, running from 10th on the grid to 5th at the checkered flag. Lucas Alecco Roy took a gamble by switching from rain tyres to slicks before the restart. Unfortunately for him, the conditions remained wet and a 20th place was the maximum result. It’s worth mentioning that Lucas was still able to fight off nine competitors who had wet tyres mounted. Rob Niessink, CEO of Van Amersfoort Racing: “Of the six available podium places, four have been taken by our drivers this weekend. In the qualifications we ended up twice in the top 10 with all of our drivers. We may conclude that the second weekend of the Italian Formula 4 Championship went very well for us. The heavy rain made it difficult to work for both team and drivers. We can be proud of our performance and we have shown that we are here to fight for the championship titles.” Race Weekend Summary: Qualification 1:Petecof P1, Aron P2, Hauger P3, Krütten P5, Cohen P7, Alecco Roy P9Qualification 2:Aron P1, Hauger P2, Rasmussen P3, Krütten P5, Alecco Roy P9, Cohen P10Race 1:Petecof P1, Hauger P2, Krütten P3, Cohen P8, Alecco Roy P14Race 2:Hauger P1, Krütten P2, Petecof P3, Cohen P5, Alecco Roy P20 Championship standings:Drivers: 1. Petecof 100, 2. Dürksen 44, 3. Hauger 44, 5. Krütten 37, 7. Cohen 32, 12. Alecco Roy 18.Teams: 1. Prema 145, 2. Van Amersfoort Racing 116, 3. BWT Mucke 66.