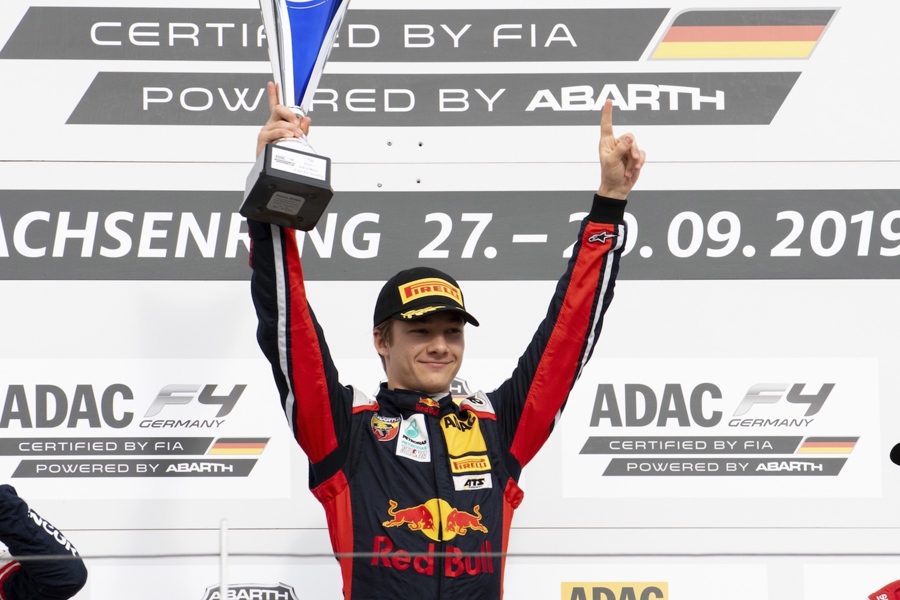 The run for the title got down to the final round of the ADAC Formula 4 Championship. At the Sachsenring, tucked away in the eastern part of Germany, Van Amersfoort Racing's Dennis Hauger still had a chance to grab the 2019 Championship title. Despite clinching a record sixth victory of the season, the Norwegian youngster ended up with seven points short of the leader in the final rankings. Where the weekend started off with promising free practice sessions, the qualifiers proved to be slightly less successful. Still, Hauger put his #62 car on fourth position on the grid for the first two races, where Cohen, Estner and Alecco Roy positioned themselves respectively on P11, P13 and P14 for race one. In the second qualification session it was Sebastian Estner closing the top 10, followed by Cohen on P12 and Lucas Alecco Roy took again 14th place on the grid for race two. Riding a rollercoaster ride where the virtual championship moved hands numerous times, it was the third and final race that determined the outcome of the 2019 season. Race 1 ended with two VAR drivers in the top 10; Hauger finished fourth, Estner ninth. Cohen secured P12 and Alecco Roy took P15. Race two saw Hauger finishing on the podium in second place. Because his direct rival for the championship title claimed first position, he was not able to close the point gap to the front. Lucas did a good job by moving up from P14 on the grid to P10 at the checkered flag. Estner had to leave the battlefield early after he was left no space by a competitor, leading to an all-ending collision. Ido Cohen also got very unlucky when he collided with an opponent with only a minute-and-a-half left on the clock, prematurely terminating his race as well.  Hauger's mission for race three was difficult, but not impossible; closing a 14-point gap to championship leader Theo Pourchaire. During the first lap of the race, Dennis did an excellent job moving from P7 to P3, where at the same time his opponent dropped back to P11. This made Dennis once again virtual champion at that very moment.  With 20 minutes left in the race, Dennis took over second position and kept ground, also after the safety car was deployed. After the restart it was a sprint to the checkered flag where Hauger finished behind Dürksen in second position on the tarmac. Dürksen was however handed a 30 second time penalty for a restart infringement, pushing him way back in the field. Because of this Hauger ended up as winner of the closing race of the season. It turned out that the classification at the finish line did not reflect the final standings. Ghiretti, P2 at the end of the race, was disqualified due to a weight issue. Rasmussen who finished third in the race, was given a 30 second time penalty for causing a collision that eliminated Estner. After all this tumult, Pourchaire was promoted to P2, which allowed him to claim the title of 2019 ADAC German F4 champion with a 7-point lead on Hauger. Sebastian Estner makes impressive progress during the weekend. At first the young German claims 10th position in a wet second qualifying session. On dry asphalt Sebastian is also on the move. This is underlined by an excellent charge from P13 to P9 during the opening race. In both second and third race Sebastian is on par for new top 10 results but got eliminated by other drivers twice. In the final race the German racing driver improves from P14 to P5 before he got hit by Oliver Rasmussen, which ended his race. In the preparation towards the season finale Ido Cohen missed out on the official test at the Sachsenring in favor of racing the Euro Formula Open at Barcelona. After learning the characteristics of the technical track and a P12 & P13 in the first two races, Ido keeps the best for last. In his strongest performance of the weekend Ido benefits from the string of penalties and is classified as fourth in the final race of the season. Lucas Alecco Roy is somewhat unfortunate in this finale. In the opening race he is well underway for a top 8 finish, but after a series of fierce battles the German loses positions. On Sunday afternoon Lucas finishes just one position down from a top 10 result. Rob Niessink, CEO Van Amersfoort Racing: "With very hard work and determination of the complete team, Dennis regained the position to fight for the title this weekend. Even though we weren't able to grab it, Dennis undoubtedly showed what he is made off. It was tough to see Sebastian got ripped from good results twice. Sure, it is part of motorsport, but he deserved a more positive ending to the season. For us as a team race season is not over though, we are heading straight into the preparations for the last two rounds of the Italian F4 Championship where we currently lead both driver and team standings. Lots to fight for!" Sachsenring Race Weekend Summary Qualification 1Pourchaire P1, Belov P2, Saucy P3, Hauger P4, Cohen P11, Estner P13, Alecco Roy P14 Qualification 2Pourchaire P1, Belov P2, Petecof P3, Hauger P4, Estner P10, Cohen P12, Alecco Roy P14 Race 1Belov P1, Pourchaire P2, Saucy P3, Hauger P4, Estner P9, Cohen P12, Alecco Roy P15 Race 2Pourchaire P1, Hauger P2,Petecof P3, Alecco Roy P10, Cohen P13, Estner DNF Race 3Hauger P1,Pourchaire P2, Leclerc P3, Cohen P4, Alecco Roy P11, Estner DNF Championship final resultsDrivers1. Pourchaire 258, 2. Hauger 251,3. Leclerc 202, 13. Cohen 76, 14. Estner 55, 17. Alecco Roy 11. TeamsTeams: 1. US Racing – CHRS 528, 2. Van Amersfoort Racing 491, 3. Prema Powerteam 367.