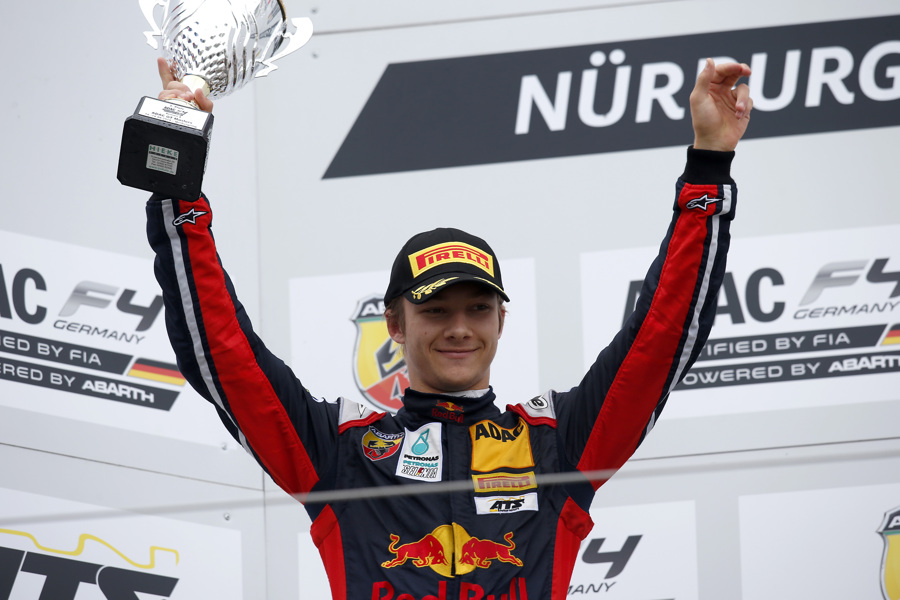 The reward comes at the end at the Nürburgring

With two front row qualifying results, all ingredients were there for a successful weekend in the ADAC Formula 4 Championship. Van Amersfoort Racing had to however wait until the final race to get a reward for speed at the Nürburgring sprint track. Dennis Hauger claimed a second spot after surviving all hard circumstances. Just five days after our home event at Zandvoort, the ADAC High-Speed Academy continued at the Nürburgring sprint lay-out for the 5th round of the championship. Right from the free practices onwards, our four drivers were on pace for success. In the first qualifying sessions Dennis Hauger secured his 5th pole position of the season, with Ido Cohen in P7 as second best VAR driver.  Dennis continued setting fast times in the second session with another front row result, only 0,143 sec. off the pole. As in the first qualifying session, Ido Cohen was the second fastest in P9. Sebastian Estner and Lucas Alecco Roy qualified respectively in 14th and 15th position. After the lights went out for the first race, Hauger did everything right. Starting from pole, the Norwegian took the lead and kept it, also after a restart behind the safety car. The SC had to come out after Lucas Alecco Roy spun off. Roy damaged his front suspension and had to retire. Unfortunate circumstances ended Dennis’ race to the podium. Debris on the track, in the form of a broken-off wing end plate, found its way into Hauger’s sidepod and destroyed the wiring loom, cutting off all power supply, causing him to retire the race. Ido Cohen improved during the 16 laps race from sixth on the grid to fifth in classification, adding 10 championship points to his tally. The second race on Sunday morning was battled out on a drying track. Despite a good start, Dennis spun halfway after hitting a wet curb, dropping back to fifth position. The other three VAR drivers also had their difficulties handling the conditions and unfortunately missed out on scoring points for the championship. Due to heavy rain showers, the start of the third and final race had a 20-minute delay and eventually started behind the safety car. From fourth on the grid, Dennis passed both Oliver Rasmussen and Joshua Dürksen in the same lap with impressive moves. He was able to maintain second position until the checkered flag and with that, claimed a well-deserved podium position. Ido Cohen finished his weekend off in 10th position, his second top 10 result of the weekend. Sebastian Estner made lots of progress on this, for him unfamiliar track, resulting in an encouraging 12th position in the final race. Lucas Alecco Roy got his share of bad luck when he got in the mix after two other drivers collided. Lucas was unable to continue the race.  Rob Niessink, CEO Van Amersfoort Racing: “Our speed was clearly visible in qualifying. Unfortunately, sometimes you need a bit of luck in the races to transform speed into results. This weekend we had to wait for that result until the last race. Dennis showed both his talent and his character in that final race. The progress Sebastian made within the weekend also deserves to be recognized.” Nürburgring Race Weekend Summary: Qualification 1:Hauger P1, Pourchaire P2, Stanek P3, Cohen P7, Alecco Roy P14, Estner P15Qualification 2:Pourchaire P1, Hauger P2, Ghiretti P3, Cohen P9, Estner P14, Alecco Roy P15Race 1:Pourchaire P1, Stanek P2, Petecof P3, Cohen P5, Estner P13, Hauger DNF, Alecco Roy DNFRace 2:Pourchaire P1, Belov P2, Leclerc P3, Hauger P5, Cohen P13, Alecco Roy P14, Estner P15.Race 3:Stanek P1, Hauger P2, Rasmussen P3, Cohen P10, Estner P12, Alecco Roy DNF Championship standings:Drivers: 1. Pourchaire 189, 2. Leclerc 136, 3. Stanek 129; 5. Hauger 121, 15. Cohen 37, 16. Estner 34, 17. Alecco Roy 10 Teams: 1. US Racing – CHRS 383, 2. Van Amersfoort Racing 315, 3. Prema Powerteam 260.