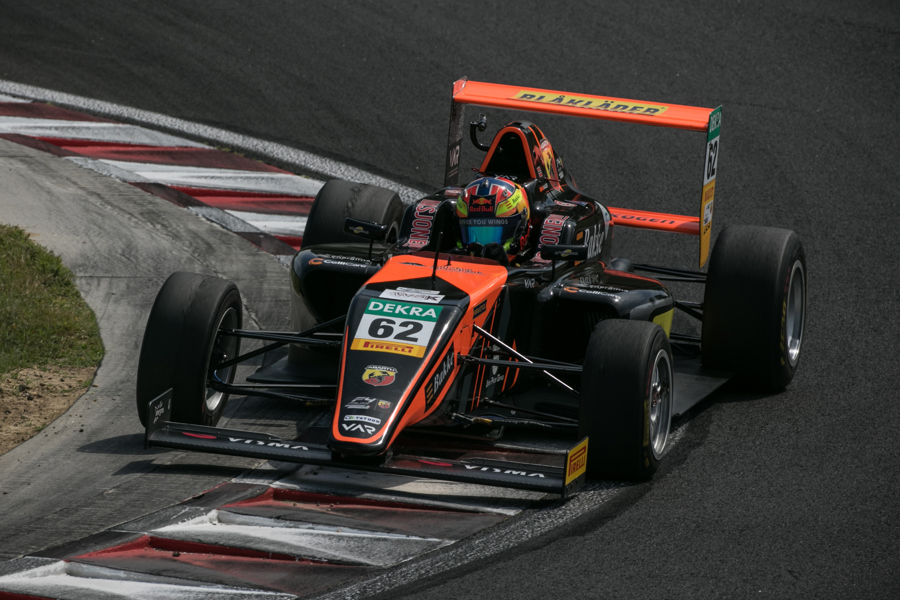 Van Amersfoort Racing experienced a very successful weekend in Hungary. Dennis Hauger dominated the 3rd round of the Italian Formula 4 Championship at the Hungaroring. The talented Norwegian took all three pole positions, won two races and took second position in race 3. Dennis also managed to set the fastest race lap in all three races. Ido Cohen showed his skills by taking an impressive third position in the final race. The VAR squad travelled to the Hungaroring with a four-man band: Dennis Hauger, Niklas Krütten, Ido Cohen and Lucas Alecco Roy. At the fast and technical track just east of Budapest, Dennis proved to be the fastest from the first moment on. The young driver from Norway extended his dominance during qualifying. His flying lap in Q2 was impressive: his 1:42,661 min. was no less than 0.561 sec. faster than the second fastest driver. In the first race Dennis continued his strong performance with an impressive start to finish victory, including a fastest race lap. Ido Cohen started from P10 and gave his campaign a boost with a solid start. After multiple catchups the Israeli finished in 6th place, collecting valuable points. Lucas Alecco Roy steamed into the top ten from P12. After 17 laps the German finished in 9th position. Niklas Krütten was very unfortunate. He had to retire after another competitor crashed heavily into his car in in the beginning of the race. In the second race on Sunday morning, it was Dennis Hauger who was ahead of everyone again. A restart and safety car period did not throw him off balance, of which setting the fastest race lap was proof. Niklas Krütten collected healthy championship points after his bad luck in race 1, finishing in 8th position. Ido Cohen just missed out a top 10 finish in 11th position. At the first restart, Lucas Alecco Roy got involved in an incident which pushed him roughly in the wall. Luckily Lucas was able to exit the wreckage unharmed, but the car sustained severe damage. Saying that the mechanics pulled a miracle by getting the car ready in time for the next race can be considered an understatement. On Sunday afternoon Dennis Hauger had a rocket start into the third race. He immediately created a gap until a red flag forced a restart. This time his car almost stalled and Dennis entered the first corner in 4th position.  In the remaining laps Hauger literally fought through yellow flags, rain and competitors until the finish line. Even though he registered the fastest race lap once again, he had to settle for second position after an intense battle to the finish line. Next to Dennis on the podium was Ido Cohen, who managed to impressively finish in third position. The young Israeli started from 11th position and took full advantage of all the tumult. He proved to be fully focused at the restart and managed to pass a string of competitors on his way to a well-deserved podium. Niklas Krütten was on the top of his game in this third and final race. A race in which Krütten’s result did not reflect his impressive performance. At the restart the German steamed up from P4 to P2 but was then hit in the second corner, pushing him to the back of the field. Rather than giving up, Niklas put his head down and worked his way back up the field in great style. Even in the final round he managed to make up three more spots and rewarded himself with a 10thposition and a championship point. Lucas Alecco Roy was able to appear at the start of third and final race thanks to the incredible performance of the mechanics. He drove a solid race and finished 12th, just outside point range. Rob Niessink, CEO Van Amersfoort Racing: “What an incredible weekend we had; four podiums, including two wins, three pole positions and registering fastest race laps in all three races. Dennis was absolutely on fire, but also our other drivers performed excellent. Ido proved to be a fast learner and saw himself on the podium Sunday afternoon, which was very well deserved. Niklas was extremely unlucky this weekend, but his come-back in race 3 showed what he is made off. Lucas was also quite unlucky, but his P9 in race 1 showcases his potential. This was our best weekend in Italian F4 so far. We are very motivated to keep this going for the remainder of the season.” Race Weekend Summary: Qualification 1:Hauger P1, Petecof P2, Aron P3, Krütten P8, Cohen P10, Alecco Roy P12Qualification 2:Hauger P1, Rasmussen P2, Belov P3, Krütten P8, Alecco Roy P11, Cohen P14Race 1:Hauger P1, Petecof P2, Aron P3, Cohen P6, Alecco Roy P9, Krütten DNFRace 2:Hauger P1, Belov P2, Aron P3, Krütten P8, Cohen P11, Alecco Roy DNFRace 3:Petecof P1,Hauger P2,Cohen P3, Krütten P10, Alecco Roy P12 Championship standings:Drivers: 1. Petecof 155, 2. Hauger 112, 3. Dürksen 68,5. Cohen 55, 9. Krütten 42, 13. Alecco Roy 20.Teams: 1. Prema 238, 2. Van Amersfoort Racing 209, 3. BWT Mucke 106.