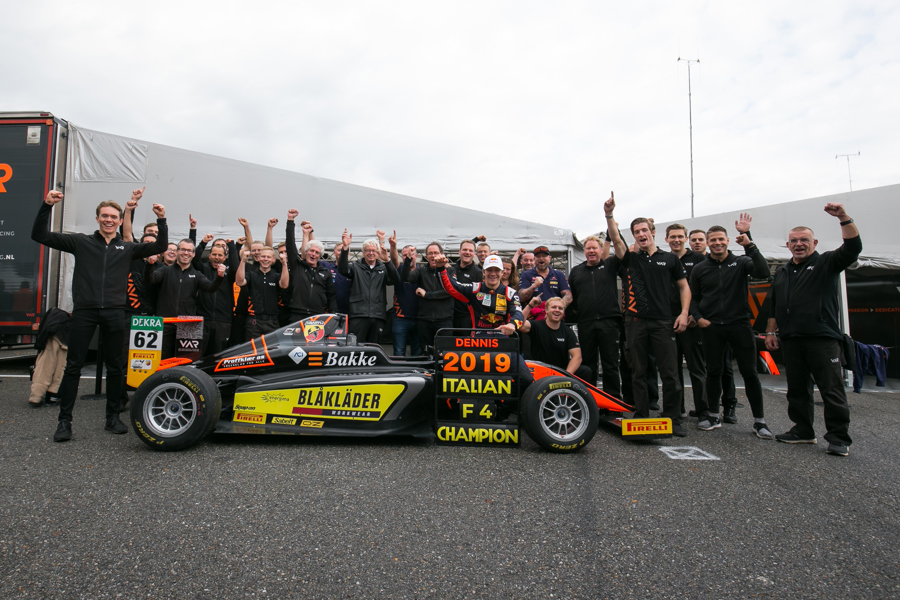 Van Amersfoort Racing experienced a fantastic final round of the Italian Formula 4 Championship. Dennis Hauger scored an impressive hattrick at the Monza circuit and claimed the 2019 driver's title. With five top 8 results, Ido Cohen and Lucas Alecco Roy also made a significant contribution to winning the team championship by Van Amersfoort Racing. At the 'Temple of speed', as Monza is referred to, the full VAR team performed very well. As we've seen during the majority of the season, Dennis Hauger was at the forefront battling for prizes. The young Norwegian completed his mission this weekend: securing the driver's title for the 2019 season of the Italian F4 Championship. Both Ido Cohen from Israel and German Lucas Alecco Roy also took this last chance to showcase their speed and talent with both hands. During the first qualification, Dennis added another pole position to his count and claimed P3 for race two and P2 for race three. Due to a penalty handed to Stanek after an incident in race 1, Hauger moved up to P2 on the starting grid of the second race. In the first qualification session, Lucas was 5th fastest; his best qualifying result in the Italian F4 Championship. For race 2 and 3, Roy managed to secure two times P9 on the starting grid, showing that the young German was in good shape. After qualifying for both race 1 and 2, Ido positioned himself on P12 for both races. For the third and final race, Cohen took P9 on the starting grid. After qualifying under dry conditions, the weather in the Milan region changed drastically. Rain tires proved to be the standard during each of the three races. Soaked asphalt on a high-speed circuit like Monza requires maximum car control and nerves of steel. The first and second race started behind the safety car due to the wet conditions. Over the course of the weekend, that same safety car had to pull out several times following incidents out on the track. Dennis Hauger performed in a class of his own on the slippery track. Neither the circumstances nor the safety car situations upset him. Where he led race 1 and 2 practically from start to finish, in race three Dennis made his final move to the top of the field only 4 minutes before the checkered flag, claiming his third win of the weekend. The hattrick brought his total number of victories to 12, smashing the record of most victories in a season. A statistic that confirms that the Red Bull junior deserved the championship very much. Lucas Alecco Roy also remained cool under the circumstances and managed to claim two top-ten results. In the opening race, the young German held on to P2 for a number of laps, eventually finishing in a very respectable sixth position and with that securing his second-best result of the season. Lucas ended the final round with a strong P7 in race three. His constant performance at Monza made him gain three positions in the drivers' championship; from P17 to P14. Also, his P6 in race one strongly contributed to claiming the team championship. Despite a modest qualification, during which luck was not on his side, Ido scored points in all three races. Thanks to his excellent car control, the driver from Israel made up multiple positions in each wet race. It resulted in a string of very constant performances: P7 in race one, P9 in race two and saving the best performance for the last race, in which he passed the checkered flag in sixth position. With his performances in race one and two, Ido also had an important share in finally securing the team championship for Van Amersfoort Racing. Rob Niessink, CEO of Van Amersfoort Racing: "It is truly an excellent feeling to end the 2019 Italian F4 Championship with clinging two titles: the driver- and team championship. Under very harsh conditions the drivers and the entire team proved to be extremely determined and put up a very solid performance. With three victories Dennis has underlined again that he is one to watch. At Monza Lucas and Ido also showed the progress they've made as racing drivers. The two championship titles are certainly and very much deserved for everyone. Of course, for the drivers, but just as much for the mechanics, engineers and the complete VAR crew!" Race weekend summary Monza Qualifying 1Hauger P1, Belov P2, Petecof P3, Alecco Roy P5, Cohen P12.  Qualifying 2Edgar P1, Stanek P2, Hauger P3, Alecco Roy P9, Cohen P12. (Hauger P2 on the grid after penalty Stanek) Qualifying 3Edgar P1, Hauger P2, Alatalo P3, Alecco Roy P9, Cohen P13. Race 1Hauger P1, Belov P2, Rasmussen P3, Alecco Roy P6, Cohen P7. Race 2Hauger P1, Belov P2, Aron P3, Cohen P9, Alecco Roy P12. Race 3Hauger P1, Aron P2, Stanek P3, Cohen P6, Alecco Roy P7.   Championship standings (final):Drivers: 1. Hauger 369 (Champion), 2. Petecof 233, 3. Aron 226, 6. Cohen 132, 14. Alecco Roy 35.Teams: 1. Van Amersfoort Racing 576 (Champion), 2. Prema 548, 3. BWT Mücke 234.