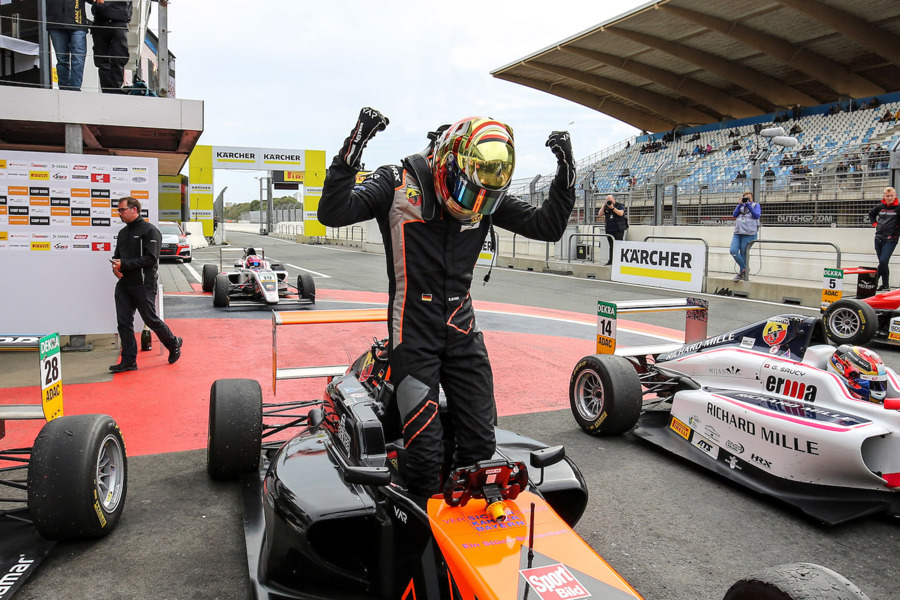 Another win with Sebastian Estner in the Dutch dunes

Despite experiencing a though weekend at the Zandvoort Circuit, it ended on a high with Sebastian Estner's flag-to-flag lead to victory in race 3. The fourth round of the ADAC Formula 4 Championship took place in stormy conditions with forceful winds and unpredictable rain showers. Like more often in life the best was saved for last: a well-deserved and flawless win by Sebastian Estner. Surrounded by the North Sea dunes, the Zandvoort Circuit is notorious for its unpredictable character and it proved to be no different this weekend. Strong winds, dune sand on the track and coming and the coming and going of rain showers caused us having little benefit from the successful test days at the Zandvoort track a week earlier. Both in qualification- and race sessions, quick action and improvisation were needed not only for all five VAR drivers; Dennis Hauger, Niklas Krütten, Ido Cohen, Sebastian Esther and Lucas Alecco Roy, but also for the engineers and mechanics. A process that involved trial and error. After a moderate first qualification, the performance in second qualification was better with 3 drivers in the top 10. Dennis Hauger ended up being the fastest VAR driver in third position. The rain caused chaos in race 1. On the grid showers fell with great intensity, after which all but one swapped to rain tires. After the start behind the safety car, the rain turned out to be very local, resulting in slicks being the better option. Due to the lack of proper radio communication (because of the storm the antenna had to be pulled down for safety reasons) our cars arrived in pitlane all at the same time. It did not improve the effectiveness of the tire change. Niklas Krütten survived the turmoil best in this opening race by finishing 8th (from 18th on the grid). On Sunday morning Dennis Hauger started from second row and was heading for a podium finish. Unfortunately, the Norwegian talent got roughly forced off the track in the Tarzan turn by Gianluca Petecof, who received a drive through penalty for this action. Now Sebastian Estner finished as the best of the five VAR drivers. His eighth place (from p15 on the grid) immediately gave him pole position for the third and final race. And starting from pole position it was Sebastian who delivered an excellent performance. After a solid start, he dove into the Tarzan turn in leading position. Sebastian reacted razor-sharp at the two restarts, put down a string of fast laps and proved to be flawless the whole race. After 16 laps the young German rewarded himself with his first Formula 4 victory and gave Van Amersfoort Racing a wonderful end to a difficult weekend. Behind Sebastian, it was Niklas who just missed out on the podium (fourth) and Dennis who gained no less than 11 positions by finishing 6th and with that limiting the damage in his title fight. Rob Niessink, CEO Van Amersfoort Racing: "It was a very demanding weekend for us. Due the weather conditions we had to anticipate on the constantly changing track conditions. What started out as a moderate performance, ended up in a high with the fantastic win by Sebastian. He joined our team fairly late in the season, had only four test days so far this year, but showed the world what you can achieve with focus and determination. His performance will inspire us next weekend at the Nürburgring when we again race in ADAC Formula 4." Zandvoort Race Weekend Summary: Qualification 1:Pourchaire P1, Aron P2, Petecof P3, Hauger P11, Cohen P14, Alecco Roy P16, Estner P17, Krütten P18Qualification 2:Petecof P1, Aron P2, Hauger P3, Cohen P10, Estner P15, Alecco Roy P17, Krütten P19Race 1:Famularo P1, Leclerc P2, Pourchaire P3, Krütten P8, Hauger P9, Cohen P12, Estner DNF, Roy DNF.Race 2:Aron P1, Rasmussen P2, Pourchaire P3, Estner P8, Krütten P9, Cohen P13, Alecco Roy P15, Hauger P17. Race 3:Estner P1, Ghiretti P2, Saucy P3, Krütten P4, Hauger P6, Alecco Roy P13, Cohen P14.  Championship standings:Drivers: 1. Pourchaire 138, 2. Leclerc 109, 3. Hauger 93, 4. Krütten 93, 15. Estner 34, 16. Cohen 25, 17. Alecco Roy 10 Teams: 1. US Racing – CHRS 288, 2. Van Amersfoort Racing 253, 3. Prema Powerteam 203.