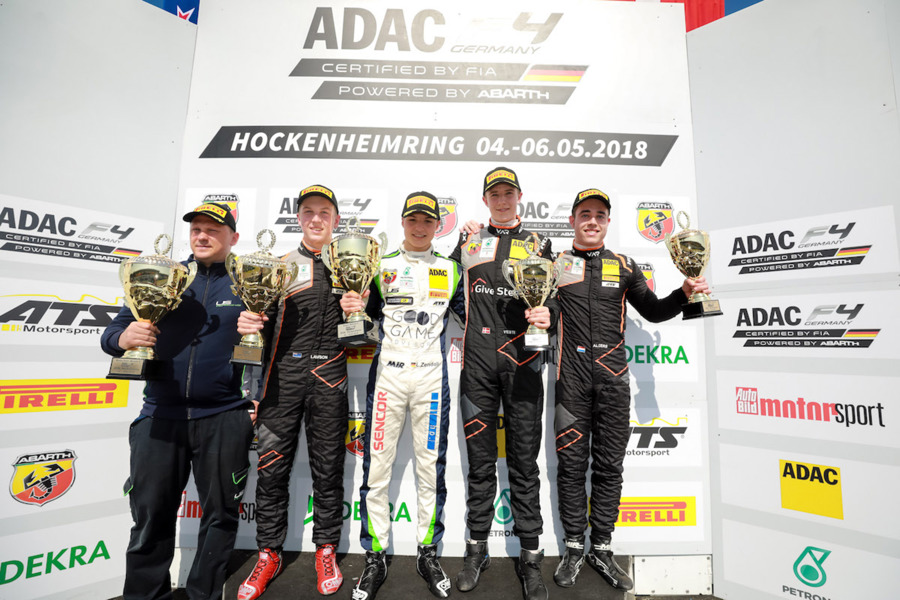 Hockenheim/Zeewolde, 8 May 2018 – Last Saturday we probably experienced the most exciting race weekend ever in our history since 1975. The second round of the ADAC F4 Championship at Hockenheim was full of fierce but fair battles between our drivers. The positive results: three podium spots, no damage and proof of 5 competitive mature drivers during a DTM event in perfect weather conditions.

Particularly the 2ndrace of the event on Saturday was a big VAR show! In the opening stages our driver Liam Lawson from New Zealand was on his way to take the lead, when a safety car interference forced him to stay behind the leader. After the restart Liam, that already finished second in race one, held on the second position, closely followed by his teammate Frederik Vesti. What unfolded was a fair but fierce battle until the finish line between the two VAR drivers. A true spectacle! Frederik tried to pass Liam numerous times, but the two drivers respected each other and podium result two and three became a fact.Â

One car behind it was Charles Weerts who kept his head cool, despite being under massive attack several times, for fourth place. An excellent result which the Belgian VAR driver repeated in the final race on Sunday.

Â In fifth position it was Joey Alders, another VAR driver. The Dutch F4 rookie started his race in 16thposition after his fastest lap time (good for around P6 at that stage) was cancelled due to track limits. In an excellent style Joey worked his way up with pure race craft. Illustrative was the move for sixth place in the race. Where Jack Doohan and David Schumacher got entangled, it was Joey who avoided the drama to gain two positions at once. His storm up front also marks Joeyâs first victory in the Rookie cup and allows him to join the two other VAR drivers on the podium!

Lucas Alecco Roy also made his mark this second weekend, despite having only one year of racing under his belt. The Van Amersfoort Racing driver from Germany converted his 17thposition on the grid into an excellent 11thposition in the second race. His strong progress was clearly visible at the chrono during the last race with a string of top 3 lap times; Lucas even did hold the fastest lap time for a while.

Rob Niessink, CEO Van Amersfoort Racing: âSeeing how our own drivers battle each other for positions was both exciting as nerve breaking. Team mates who eliminate each other is what we want to avoid in every way. But on Saturday our youngsters showed race skills and respect for each other. This is the way to go. From a team perspective it is rewarding to see all of our five drivers being competitive. With finishing 2-3-4-5 and 11 on Saturday they all did an excellent job. You can say, the only thing missing so far is a win and what we learned from the Hockenheim weekend is that we have to work on our effectiveness in qualifying. We will develop that more in detail during the coming weekend when we compete with 3 of our guys at Paul Ricard for an Italian Championship round.â