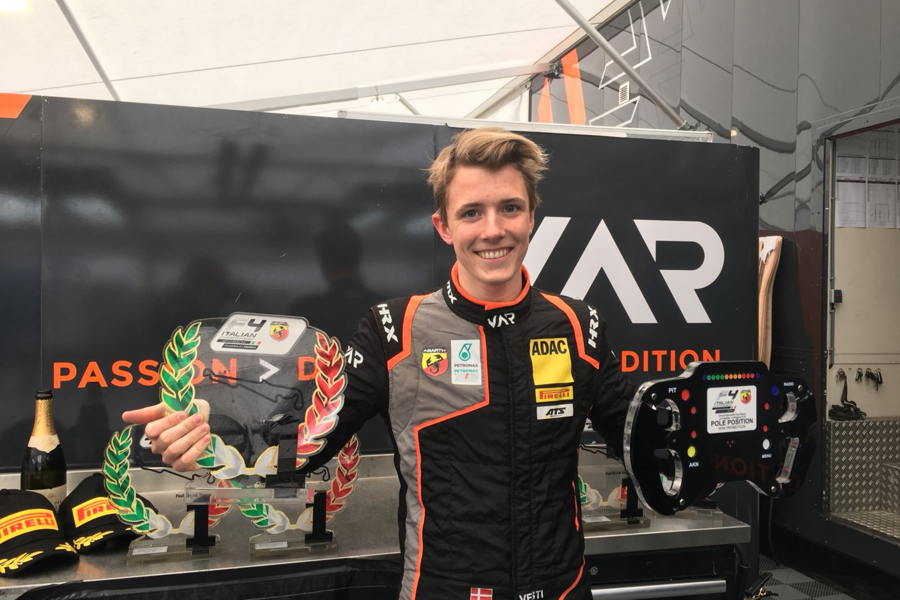 Van Amersfoort Racing travelled to the F1 circuit Paul Ricard to take a guest start in the second round of the F4 Italian Championship. It was a big step into the unknown: VAR's F4 team had no experience with this track and none of the three drivers raced at Paul Ricard before. The outcome: one pole position, one second place and two victories.

With our German race talent Lucas Alecco Roy, Frederik Vesti from Denmark and Belgian Charles Weerts, we decided to seek competition in Italy as a bonus on top of the races in the ADAC F4 German Championship. As it turns out; our guest appearance went very successful.

From the third free practice onwards, it was Frederik Vesti who was among the quickest on the track. The runner up in the ADAC German F4 series' standings grabbed pole position for race one, was third on the grid for race two and second for the third and final race.

These results are a clear indication of the qualities of our in-house simulator program. All three drivers learned the characteristics of this track in the South of France at our factory in Zeewolde.

After grabbing a strong second place in the opening race, Frederik dominated the full wet second race. In heavy rain, the 16-year old Dane took the lead from early on. Where many others struggled in dreadful conditions, it was Frederik who showed excellent car control. It resulted in a first dominant win in his Italian Formula 4 debut.

In the soaking wet, it was Charles Weerts who also made a mark. Starting from 12th position, he avoided all the drama and worked his way well into the top ten. After nine laps the Belgian gained seven positions to take 5thplace at the checkered flag. Lucas Alecco Roy showed his talents as well by gaining no less than ten positions: from 26thto 16th!

On Sunday, Frederik Vesti continued his domination, this time in dry conditions. From second on the grid he made a rocket start. With a calculated dive into the first corner he definitively outpaced his main rival Enzo Fittipaldi. He kept his lead throughout the rest of the race and took first place again; his second victory of the weekend.

Charles Weerts ended his Italian debut with his third top ten finish of the weekend. After a 10thplace in the first race, 5thin the second and 8thposition in the third race. Lucas Alecco Royput on a good show by overtaking a good portion of the competition. From 26thon the grid, the German took 19thposition when he crossed the finish line.

Jeroen de Jong, team manager of the Van Amersfoort Racing F4 team: "Of course we are very happy with the results this weekend. Frederik did an excellent job both in qualifying and during the races. Charles showed his talent, especially in the rain. As for Lucas, he is making impressive progress. It is an achievement in-itself if you manage to stay out of trouble and gain positions, especially when you start in the back half of the field. All-in-all I think it is fair to say that Van Amersfoort Racing dominated this event and that gives massive confidence for the rest of the season."