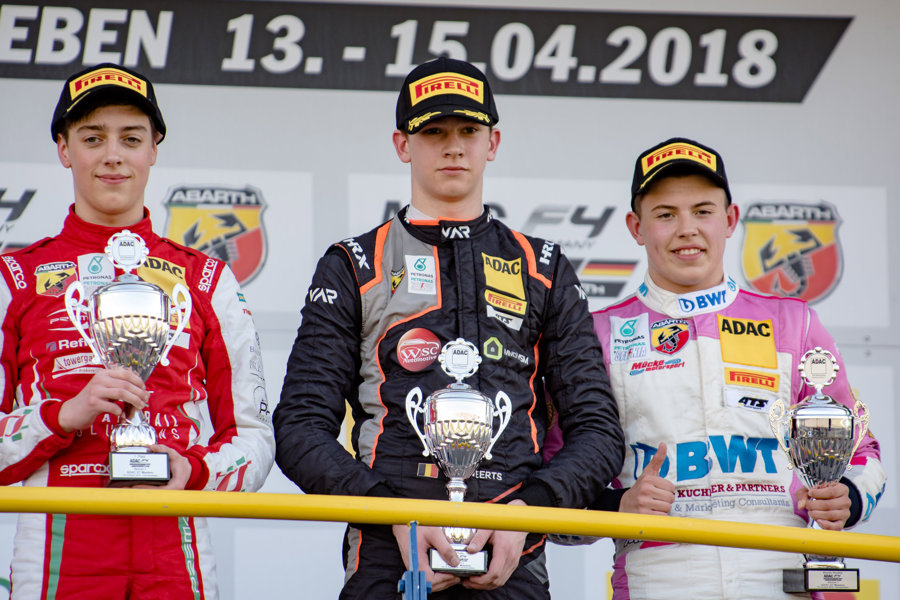 The mix of rain and sunshine made the start of the new season in the ADAC Formula 4 season a real challenge. Nevertheless our five drivers - four are new in the team - showed great performance at Oschersleben. The result for Van Amersfoort Racing: three podium finishes with three different drivers.

Joey Alders (Netherlands), Liam Lawson (New-Zealand), Lucas Alecco Roy (Germany) and Charles Weerts (Belgium) made their racing debut with VAR in ADAC F4 at the compact and twisty track of Oschersleben. Frederik Vesti (Denmark) started his second season with our team. Meaning Van Amersfoort Racing is present with no less than five Tatuus-Abarth powered Formula 4 cars; a new milestone for the Dutch squad.Â

The very first race of the season was marked by several safety car interferences as more often seen at Oschersleben. After a start from fourth position Liam Lawson (16) gradually worked his way up to the podium. With several daring overtaking maneuvers the young New Zealander showed his skills, resulting in a more than deserved third place. Frederik Vesti (16) finished 6th, earning his first championship points of 2018.

Fredrik Vesti was not too happy with his result in the first race. A few hours later the Dane showed his racing spirit by securing a P2 podium result, being the only driver able to put pressure on winner Lirim Zendeli. Also Charles Weerts (17) hit back after his DNF in race one by finishing just outside the podium on P4. Liam was unable to fight for a top 10 finish in race 2 due to a 19th position on the grid. Such after he was caught by the rain in the final stages of qualifying, following a delay due to a technical failure, leaving the Kiwi no time for a flying lap.

With 21 young and ambitious drivers on the grid there is always action on track. In the thrilling final race of the event, all our drivers performed outstanding. Watched by 25000 spectators Charles Weertsâ coolness brought third place; his first F4 podium finish.Â

Frederik Vesti started 7th and landed in 4th, so collected healthy points in all three races. Both Joey Alders and Lucas Alecco Roy stood out by claiming their first top 10 result. Lucas went from p12 to an p8; impressive given it is only his second season in motorsport! Dutchman Joey Alders impressed massively in his first-ever car race event by finishing runner up for the Rookie standings and 6thoverall. Liam showed fast lap times but was unfortunate after contact with another car. A visit to the team for a new front tire double crossed his podium ambitions.

Rob Niessink, CEO of Van Amersfoort Racing: âwith five cars we represent almost a quarter of the field, which is very special for us as a team and sometimes nerve-racking when they drive close to each other. But all five did a very good job and we are satisfied with the overall performances in this maiden F4 event of 2018. Three podium results with three different drivers indicates that we are competitive. Nevertheless we are also critical to ourselves and since we did not win any race, which is of course always our goal, we know there is still homework to do.â