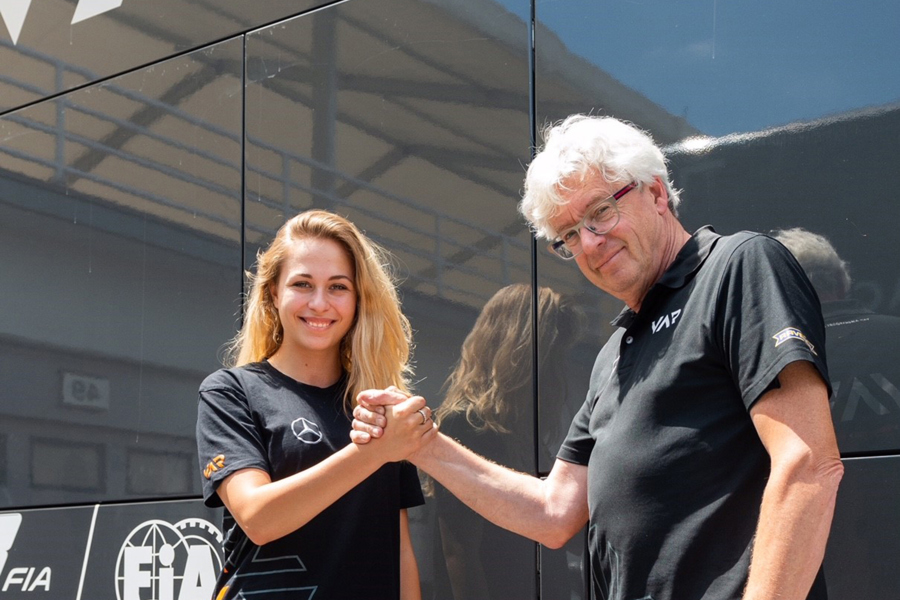 With immediate effect Van Amersfoort Racing and German racing driver Sophia Flörsch team up for the remaining of the FIA Formula 3 European Championship season and the 65th Macau Grand Prix. Sophia, ambassador of Susie Wolff’s non-profit organization Dare to be Different, will already be behind the wheel of the third VAR Dallara Mercedes-Benz at Zandvoort next weekend.  Sophia Flörsch (17) steps up into Formula 3 after two seasons in Formula 4, in which she did not only become the first female driver to secure championship points, but finished on the podium multiple times with a fastest lap as well. A unique achievement!This winter Sophia joined Van Amersfoort Racing for winter testing. After a focus on school exams, the German female driver will now debut in the FIA Formula 3 European Championship, during the 4th round of the championship at Circuit Park Zandvoort, to do all remaining rounds of the series plus Macau.Sophia Flörsch says: “After a period in which I had to give priority to passing my school exams, it feels great to know I will be back in the racing seat again to fully focus on my racing career. I am very grateful to my loyal sponsors and the effort put in by VAR and their engine partner HWA and the further partners that will join our project, which we will announce soon.” “Stepping up from Formula 4 into the highly competitive FIA Formula 3 European Championship is an extreme challenge, but we all see it as a next step up the learning curve. I will give my utmost to reward all stakeholders and with the experience and support of VAR, I am convinced that I will learn a lot. I have more than ever an excited feeling about my future career.” Frits van Amersfoort, founder of Van Amersfoort Racing, says: “We warmly welcome Sophia to the team. Her drive to climb the autosport ladder deserves lots of respect. During winter testing her performance behind the wheel convinced us of her qualities. We expect that with enough mileage and time to learn, she can be competitive in Formula 3. Of course it is not ideal to enter the series now the season is already underway, but we will use all our experience and dedication to help Sophia get familiar with Formula 3 as soon as possible.” Sophia represents Dare to be Different, which is a non-profit organisation founded by Susie Wolff, enabling female talent to drive in all areas of motorsport.It aims to increase female participation, not just on the track but in all aspects of the sport and other perceived male-dominated industries. The organisation is represented in the UK, Germany and Australia. “Being an ambassador for Dare to be Different is also truly an honour and a privilege. Racing is a fascinating sport in all its facets. If we can achieve to get more girls interested in giving it a try, I have reached one of my goals.”