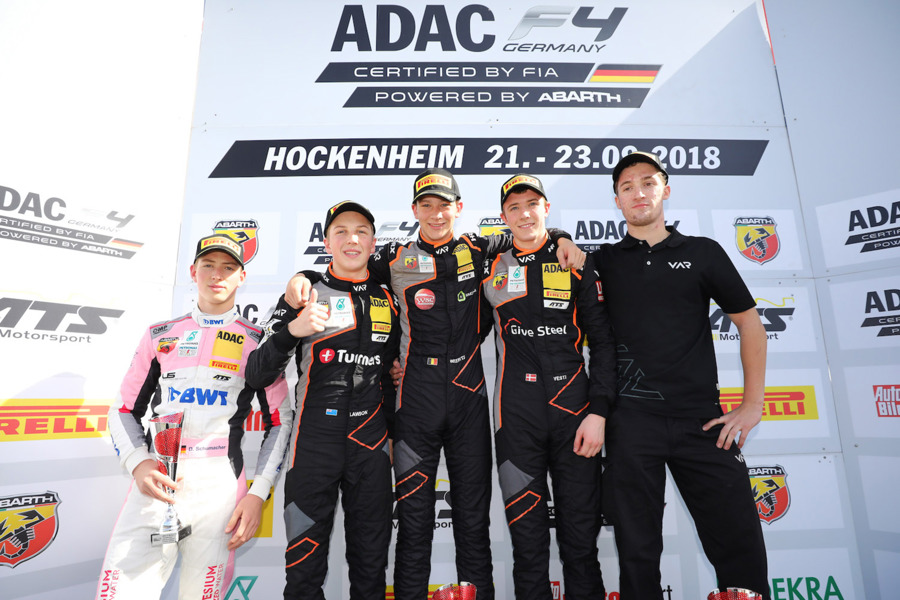 Another 1-2-3 lock out for Van Amersfoort Racing

The Hockenheimring served as a host of the last round of the ADAC Formula 4 Championship. From the first moment on, our five drivers were among the fastest on the track. Sunday evening we were happy to add a double pole position, a podium lock out in race 1 and two more podium results to our tally. Van Amersfoort Racing is also vice champion in the drivers championship with Liam Lawson and runner up in the team cup.

The final venue of the season at the Hockenheimring is a recipe for close racing. The track of 4,574 km suits the Tatuus Formula 4 car very well, offering numerous overtaking opportunities like Spitskehre, SÃ¼dkurve und Einfart Parabolika. The results of the free practices offered a glimpse of our potential. In the first free practice we took position 3 to 6, and 2nd, 3rd, 4thÂ and 6thÂ in the second session.

At the start of the Friday evening the two qualifying sessions were spiced up by a rainshower before the session started. In these difficult conditions it was our driver from New Zealand, Liam Lawson, who managed the wet track the best of all 16 drivers. It resulted in his first double pole position of the season. In Q1 Charles Weerts was 4th, Lucas Alecco Roy 6th, Joey Alders 11th, Frederik Vesti 12th. In the second session on a drying track Frederik was the second best VAR driver in 4th, Charles in 8thÂ Joey 9thÂ and Lucas in 15thÂ position.

Â The first race on Saturday morning developed into a Van Amersfoort Racing show. Pole sitter Liam initially saw Lirim Zendeli pass him, but the champion dropped back after a drive through penalty. From 4thÂ on the grid, Charles found so much speed, that he managed to overtake his teammate Liam for the lead. It resulted in the first victory in the ADAC German F4 for the Belgian. Frederik had to start from 12thÂ after a technical issue in Q1 and bounced back in great style straight onto the podium. As a result, we could celebrate the second podium lock out of the season: Charles 1st, Liam 2ndÂ and Frederik 3rd. Joey made it into the top 10 and collected championship points in 9thplace, while Lucas finished 13thÂ after being pushed in a spin just after his start from a very respectable 6thÂ position.Â

Another podium result was added after the second race by Liam Lawson. The pole sitter lost one position at the start and had to battle his teammate Charles until he finished for third, it being the second podium finish this weekend for Liam. Charles proofed being on the move again: from 8thon the grid he worked his way up in an impressive manner. Joey finished 10th, securing his second top 10 finish of the weekend. Lucas showed good lap times converting 15thÂ at the start into 13thÂ at the checkered flag. Frederik was forced to retire after a collision with another driver.

Charles proved to be at the top of his game again in the final race on Sunday afternoon. In a sequence of three turns the VAR driver managed to pass three opponents to take the lead. A real impressive move by the Belgian. At the same time Frederik showed great race skills from 16thÂ position. Half-way the Dane was in 4thbefore a technical issue forced him to pit, obviously loosing time and positions in the process. Eventually Frederik finished in 13th. Charles ended the season with his third podium result, being second this time. Only a couple of a tenths behind the reigning champion. In 11thÂ place Lucas scored his best result of the weekend. The race of Joey Alders was jeopardized after his front wing got damaged in a collision and a drive through penalty, resulting in a 15thÂ position. In his ambition for another podium result Liam was struck by bad luck. The New Zealander was overlooked by another driver, so his car went airborne, broke a wishbone as a result and Liam had to retire.Â

Rob Niessink, CEO Van Amersfoort Racing: âSeason finals always result in eventful racing. It was proven again this weekend at Hockenheim. Liam Lawson showed his talents with his double pole. A more than excellent start of the weekend. With the 1-2-3 in the first race we took maximum advantage of the drive through for Lirim Zendeli and showed how strong our driver line up is this season. Charles Weerts proved his first F4 victory in the German championship was built on race craft with two more podium results. Despite some bad luck Liam Lawson secured the runner up spot in the drivers championship. As for Frederik Vesti: he certainly showed speed and race craft but was double crossed by bad luck in qualifying session 1, race 2 and race 3. It was a weekend with ups and downs for Joey Alders, but the rookie driver secured two top 10 results. In the three final races of the season Lucas Alecco Roy showed how much progress he has made. His excellent 6thposition in wet qualifying gave a very clear indication. When we look at the final results, we have to make clear that winning is always our goal. However being second in both the drivers championship and team cup is a result that we can live with for now, especially since the ADAC F4 championship is a highly competitive one.âÂ Â