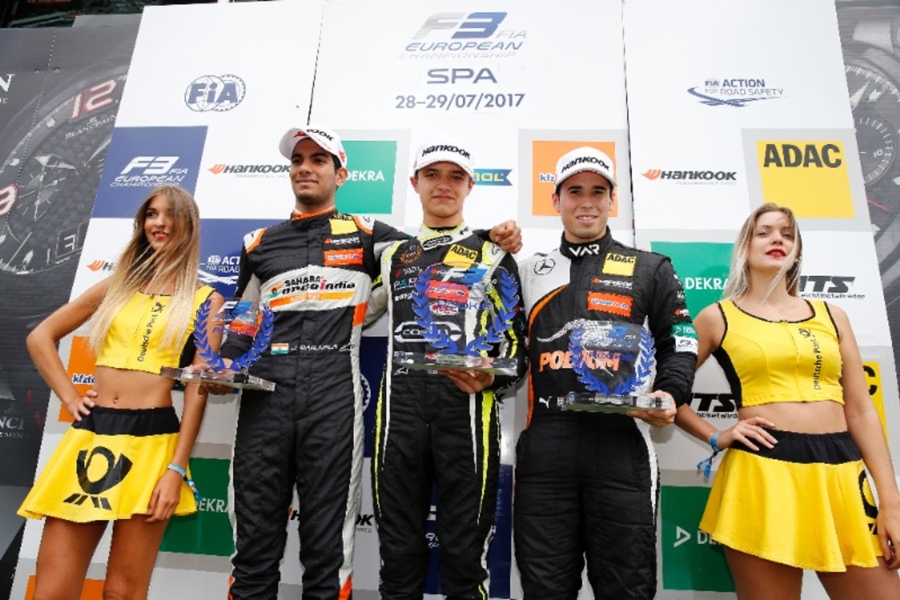 Our drivers were excited for some weeks knowing the iconic Spa-Francorchamps track in Belgium was on the menu. It was all about top speed and benefitting from slipstreams during the sixth round of the FIA F3 European Championship. On character we battled our way to 2 Rookie podiums and six top 10 results since the rain held off.

In the Belgian Ardennes the boys are separated from the men. Also in Formula 3. All racing drivers find Eau Rouge/Radillion very special and love the lay out of the 7.004 km long circuit which combines slow and very fast sections. This weekend it came down on the performances on the long straights and using the slipstream. It first encountered in qualifying and later on in the races.

Harrison Newey set a ninth time on the sheets for both first and third race being the fastest of our three drivers, Pedro was the fastest VAR driver in the second qualifying in 10th position. Others drivers were able to develop more topspeed and that made a lot of difference being well into the top 10 or not. Especially because the track was dry in all three sessions.

Formula 3 rookie Joey Mawson was on a mission in the first race on Friday. He rocketed from 11th on the grid to a very impressive fifth place. The Aussie stayed focused at the restart, not only bringing him his third top 5 finish of the season, but also a excellent third place on the Rookie podium. Harrison Newey gained three positions, bringing him seventh and also Pedro Piquet earned a championship point after finishing tenth.Â

Also in the second race it was Joey who proved the best performing VAR driver. This time he gained three positions: from P13 to P10. And again the raining German F4 champion went to the podium ceremony for the rookie drivers, picking up his trophy for third place. Pedro was hit by bad luck: he was crashed out by another driver three laps before the end.

In the final encounter at Spa-Francorchamps Harrison led the Van Amersfoort Racing clan. The Briton kept his position and bagged two championship points in ninth position. Joey finished in tenth, sealing his third top 10 results of the weekend. A well earned results after fending of the attacks of Nikita Mazepin.Â

Rob Niessink, CEO of Van Amersfoort Racing: âConsidering the circumstances we are not to unhappy with the speed we developed at Spa-Francorchamps. At this circuit we dit not have the package to match the top speeds of some other teams. It made racing more difficult for our drivers. Of course we want to be more in front, although two Rookie podiums gives a clear clue of our true potential.â