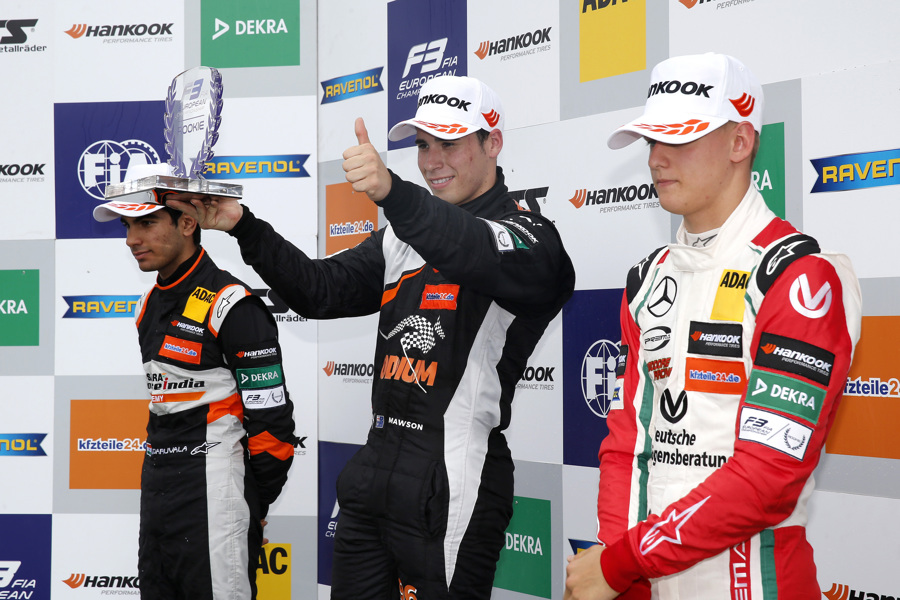 Three rookie podiums including a win at Hungaroring

Budapest/Zeewolde, 20 June 2017 - Racing a F1 track is something special for the youngsters in the FIA European Formula 3 championship. Down at the Hungaroring the world saw how competitive Formula 3 is nowadays. In this competitive environment Van Amersfoort Racing went home with one Rookie win and two second places for F3 newcomer Joey Mawson.

The characteristic of the 4.381 track near Budapest makes life even harder for the F3 racers. Overtaking is quite difficult at the Hungaroring, so qualifying is the key for succes. It led to nail bitting sessions. In the first qualifying session, the difference between P3 and P12 was less than 0,3 of a secondâ¦

In that rain dominated session, our Australian Rookie Joey Mawson showed his skills in the wet, by setting the second fastest laptime. Together with polesitter Maximilian Gunther he was the only driver under the 1min50 mark. Pedro Piquet and Harrison Newey felt comfortable in these wet conditions resulting in an excellent sixth position for Pedro and a strong ninth for Harrison.Â Â

In the opening race Joey started from P5 due to a penalty he received during the preceding Pau event. Despite this handicap the Aussie was the only driver in the top 5 who managed to gain a position. Joey overtook Callum Ilott by the outside in turn one on the 9th lap. The strong drive was rewarded by finishing 4th and a Rookie podium result: Joey stepped up the podium as the second finishing rookie.

Harrison Newey showed his race craft from 9th on the grid. The Briton claimed an excellent opening lap and also proved overtaking is possible at the Hungaroring, resulting in a strong sixth position. Far less lucky was Pedro Piquet. In 8th position another driver crashed into his Dallara resulting in a heavily damaged rear end including the complete rear wing. In the pits the team managed to repair the car,Â  Pedro was then able to do some installation laps in preparation for second qualifying.Â

In the second qualifying Joey again proved he is learning fast by setting the 8th fastest time for both races. Both Pedro and Harrison were struggling to find rhythm during the 20 minutes session. The young Brazilian was affected by the harsh crash in race 1. Harrison arrived at the circuit late Thursday night as he had to complete school exams on that day. The Briton made a small mistake causing a spin on his outlap, resulting in severe damage to his tires.

Joey Mawson continued his strong performance in the second race. He managed to gain one position resulting in 7th overall. On top of this Joey also was the best performing rookie, so he stepped up the podium to spray some champagne to celebrate his rookie win. Pedro finished in P13, while Harrison worked his way up from the back to P14 before he got penalized with 20s for a track limit infringement.

The final race made three out of three for our Australian rookie finishing at the 8th position in what can be called a procesional race. Joey visited the rookie podium again as runner up. It marks his most steady performance since his Formula 3 debut only four events away.Â

Rob Niessink, CEO Van Amersfoort Racing: âIn general we are pleased by the performances of the team and the car at the Hungaroring. In this competitive environment we showed we have the speed to win. It is unfortunate that Harrison missed out his usual preparation due to school duties. While Pedro struggled with the aftermath of the odd crash in race 1. As for Joey: he did an excellent job this weekend. His most steady performance resulted in three rookie podiums including one win. Without the grid penalty for race 1 Joey could have been on the general podium!â