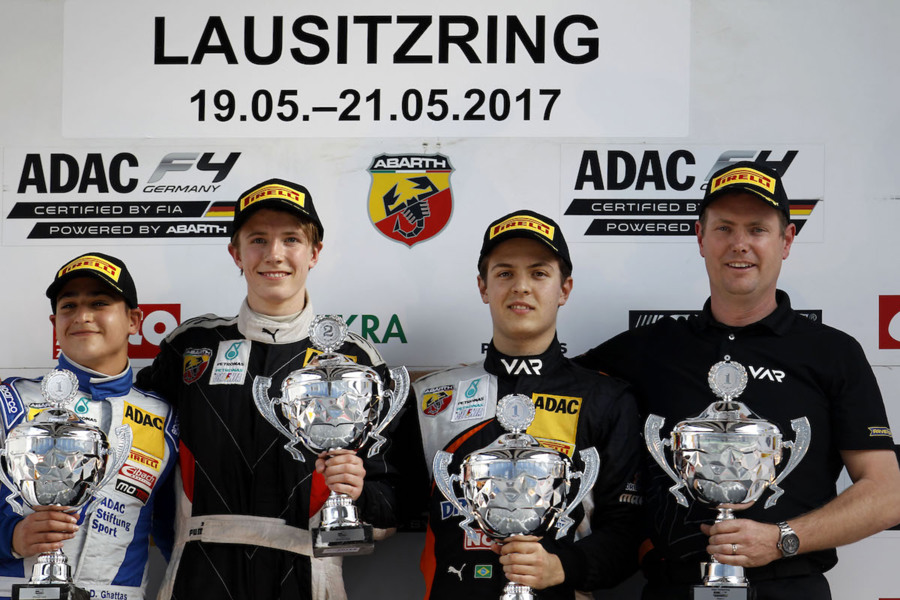 One, two, four warps us back in winning league

Two Van Amersfoort Racing drivers on the podium battling each other with champagne. The second appointment for the ADAC Formula 4 championship at the Lausitzring ended on a high for us. Felipe Drugovich from Brazil gave us the first victory of the season and himself a very special early birthday present with his maiden F4 victory.

Alongside him it was Frederik Vesti from Denmark, who did an incredible job being on the podium in only his sixth race. But there was more to cheer for: the second place for Kami Laliberte in opening race for instance, or the fourth place for Briton Louis Gachot in the final race.

We found the speed at the Lausitzring. With the fastest time of Felipe Drugovich in the last free practice with a clear margin of almost 0.1 second, we gave a strong indication of our potential. Our pole setting ambitions where double crossed by a red flag at the wrong moment during qualifying. Kami set for 5th, Felipe was 8th fastest, Fredrik P9 and Louis P16.Â  Louis having arrived at the circuit just in time for the qualifying session, having a school exam in the morning in Spain!

In the opening race on Saturday we finished in the top 10 with all four youngsters. The fastest of them all was Kami, with a splendid second place. The Canadian earned his first podium finish of the season with a brave and brilliant move towards the first corner. Starting from P5 he dived into the inside of the corner to grab second place. Also Felipe in sixth and Frederik in seventh improved two positions over the race. Even more impressive was the giant leap forward by Louis: from 16th position he scored his first championship points of the current seasonÂ  in P10.

Felipe made an excellent start in the second race on Saturday. As one of the few the Brazilian managed to improve his position from fifth to second. At the podium he was cheered to by his family who came the visit the team at the Lausitzring. Also Kami (P6) and Frederik (P9) collected healthy championship points again.

After two second places it even got better. For the most of the final race an Van Amersfoort Racing trio was leading the race. Felipe confirmed his excellent shape by taking the lead after a few laps from fifth on the grid, followed by Frederik who also made up two positions. Poleman Louis was in third almost the entire race. In clean style Felipe crossed the flag after 21 laps taking his maiden victory in the ADAC Formula 4, just two days before his 17th birthday.Â Â

The performance of Frederik was impressive: second place in only his sixth race in the ADAC German F4 Championship. Also Louis made his mark and scored his personal best result ever, being fourth. Unfortunately Kami had to retire after being involved in an incident, and terminally damaging his car, on the first lap.

Jeroen de Jong, team manager of the VAR Formula 4 squad: âOne victory, two second places, a fourth position and two fastest race laps. We can review on a very strong weekend at the Lausitzring. My compliments to Felipe, Frederik, Kami and Louis, and also to the engineers and mechanics. It was teamwork at his best and the drivers made most out of it. This is very encouraging for the rest of the season.âÂ