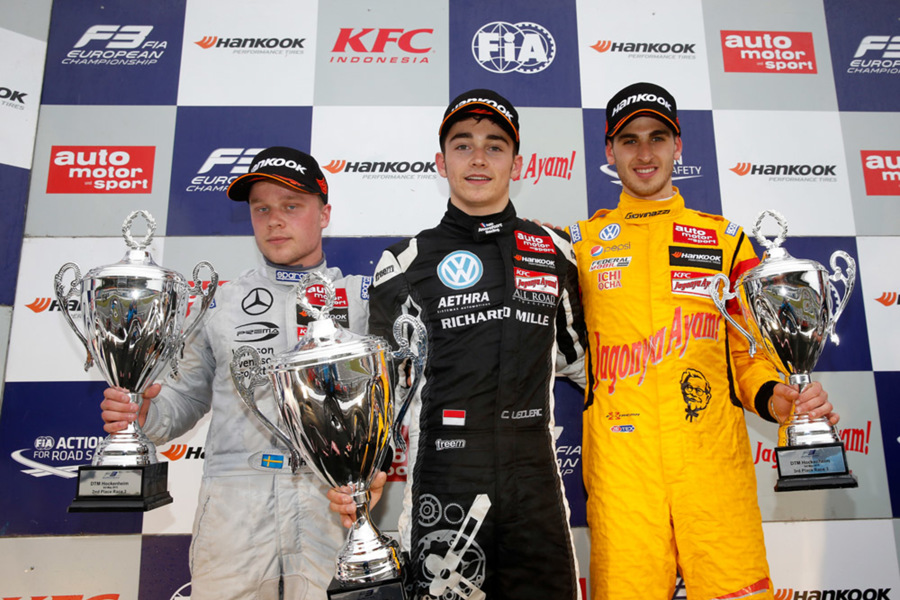 The race to runner up at Hockenheim

In the very last Formula 3 event of the year Van Amersfoort Racing is on a mission. In both the drivers championship and the team championship we are in the race to become vice champion. At the GP track (4,574 km) of the Hockenheimring Charles Leclerc, Alessio Lorandi and Arjun Maini will give their best during the finale of the European FIA F3 Championship.The battle for second place in the drivers championship will be a real thriller. Our Monegasque rookie champion Charles Leclerc is only 6 points behind his toughest rival Antonio Giovinazzi. In person of Jake Dennis there is a third candidate for the vice championship. He is 23,5 point behind Charles.In the first FIA Formula 3 European Championship meeting at the Hockenheimring earlier this season Charles demonstrated that the GP circuit suits him well. In his first F3 appearance he made it to the podium in all the three races and won one race. But also Giovinazzi performed on a high level. The battle for the maximum amount of 75 championship points over three races will be very exciting.The battle for second place in the team ranking will be contested by Van Amersfoort Racing and Jagonya Ayam with Carlin. Our three rookies Charles Leclerc, Alessio Lorandi (Italia) and Arjun Maini (India) will have to overcome a 30-point gap to the second-placed British team that will be represented by Antonio Giovinazzi, Gustavo Menezes and Ryan Tveter. Game on!Schedule Hockenheimring FIA European F3 (11th and final round)Race 1: Saturday, 17 october 10:15 hrs. (35 minutes)Race 2: Saturday, 17 october 16:05 hrs. (35 minutes)Race 3: Sunday, 18 october 10:45 hrs. (35 minutes)Current standings prior to the 11th and final round of the FIA F3 EC:1. Felix Rosenqvist 453 (champion); 2. Antonio Giovinazzi 362,5; 3. Charles Leclerc (Van Amersfoort Racing) 356,5. (rookie champion); 18. Arjun Maini (Van Amersfoort Racing) 27; 19. Alessio Lorandi (Van Amersfoort Racing) 26.