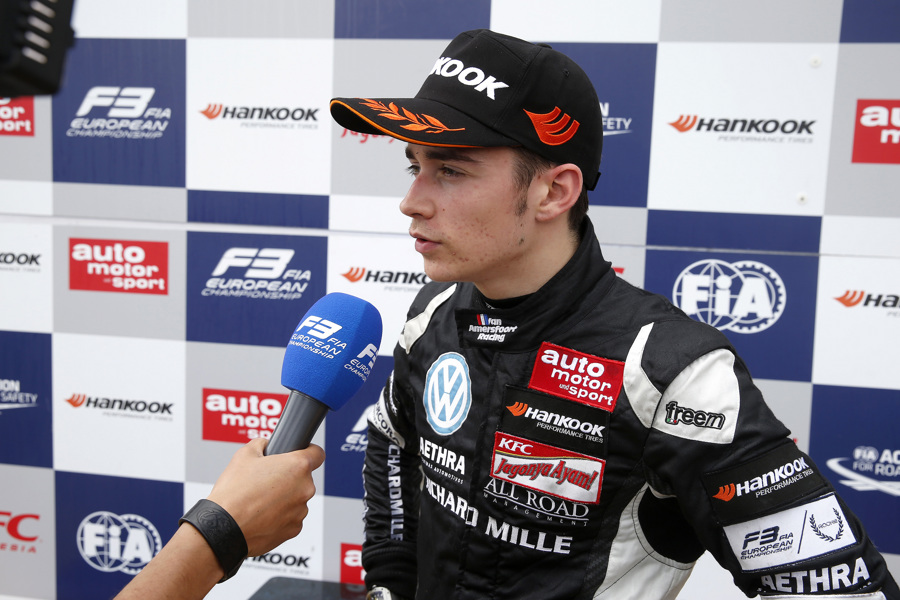 The only way is up for Charles, Alessio and Arjun

The season kick off was held 10-12 april at the Grand Prix track at Silverstone Park in the first weekend of may. This track is holy ground for every racer. The first ever Formula 1-race was held at this track in 1950. The inspiring atmosphere boosted our drivers towards an excellent start of the season.

F3-rookie Charles Leclerc claimed pole position for race 2 and 3 and managed to convert his second pole into a marvelous first victory. The 17 year old Monegasque teenager compensated a modest start by an excellent race pace. He withstood the pressure of the more experienced Antonio Giovinazzi and immediately showed his racing skills.Â

With two poles and a second place (race 2) in his bag Charles, 2014 runner up in Formula Renault ALPS, made a dream start in F3. Also Alessio Lorandi and Arjun Maini gained significant progress in their first Formula 3 outings.Â

Hockenheim: Charles does it again

Next stop was Germany. More specific: the Hockenheim Ring. A track famous for both the stadium atmosphere as the Spitzkehre hairpin. An excellent spot for the brave to make a move on the opponents.

Charles Leclerc started from second position in the final and wet race at Hockenheim. One day earlier he conquered second place in the second race, this time the Monegasque teenager battled for the win with Felix Rosenqvist. Charles managed to trim down a backlog of 1,5 seconds first and then made a classic cutback move on Rosenqvist at the Spitzkehre hairpin. After a side by side duel towards the Mercedes arena Charles finally got in the lead. Both Alessio Lorandi and Arjun Maini experienced a difficult weekend in Germany, but progress was in the making as how occurred in the south of France.

For the third round of the FIA Formula 3 European Championship we went street racing in Pau. The atmosphere in the South of France is like no other. Palm trees, the Pyrenees and a enjoyable demanding narrow track, where the barriers are always close.Â

The work in progress resulted in the best team effort so far. In the last race on sunday all three VAR drivers finished in the top 10. Charles Leclerc made it to the podium for the third time in a row. After finishing 3th en 2th our Monegasque rookie claimed 3rd spot again. After a strong performance Arjun Maini finished in 5th position. It marked the best result so far for the F3 rookie from India and 2014 vice-champion in BRDC F4.

Also Alessio Lorandi impressed by finishing 7th. The 16 year old Italian promoted directly from go-karts into the Formula 3 this season and is beginning to find his way around in our Dallara-Volkswagen single seater. His strong sixth place in the second race at the Pau Grand Prix track underlined the strong progress Alessio is making.

After 9 races and three events F3 rookie Charles Leclerc is in 2th place in the championship standings, Arjun Maini 12th and Alessio Lorandi 15th. Next stop is the Autodromo di Monza. Known as the Temple of Speed because of the high speed section and super-fast average speed.