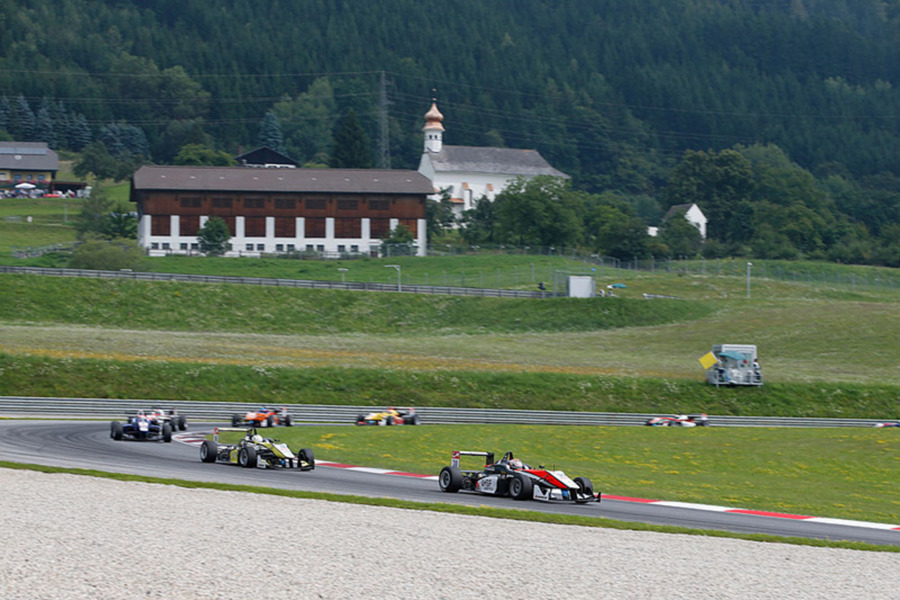 Van Amersfoort Racing had an eventful weekend full of daring overtaking and some good points finishes for all our drivers at the Red Bull Ring in Austria. Unfortunately though, the weekend also saw Max Verstappen lose two podiums due to penalties. Van Amersfoort further had to concede third place in the team championship to Yagonya Ayam with Carlin, but the gap is very small.

Conditions were hot in the Alps, and so was the battle for pole in the first qualifying session on Friday. Several drivers battled it out for the top positions, continuously improving the best time right until the death. Gustavo and Max were both in the mix, with Max running pole man and Championship rival Esteban Ocon (Prema Powerteam) closest. His reward was a front row P2 spot with Gustavo P7 and Jules further back in P21.

The Saturday morning race started with a bang as Max had a better start than Ocon and went for the overtake on the inside of the first corner. Ocon cut back across, they collided right rear- to left front wheel, and Ocon went spinning off. Max subsequently lost five places in the following straight, but the Frenchman never recovered back to the point scoring positions. Gustavo had a more quiet start and -race. It was a good thing he did, because he scored a very good seventh. Jules was eliminated halfway through the race by Nicolas Latifi (Prema) when the latter lunged in on an impossible do or die move on the inside. Jules went off with two wheels in the air and earned zero points despite a bright first half of the race with some positions gained.

Back to the front, where Max first took back P5 from Fuoco (Prema) on lap two and was gifted P3 some laps later when Jake Dennis (Carlin) forced off Felix Rosenqvist (MÃ¼cke Motorsport) during an attempted overtake. Max finished in third, but was judged to have gone outside the track limits when overtaking Fuoco on lap two. The five second time penalty thus demoted him to fifth at the end.

Determined to do better, the boys gave it their all in qualifying two. However, a red flag situation hampered their chances. Because VAR was at the back of the pit lane, our drivers were the last out of the pits. This cost them one timed lap at the end in which many others improved their times. P7 (Max), P12 (Gustavo) and P21 (Jules) was the disappointing result.

The next day, race two was just as exciting as the first one on Saturday. The start was clean, but Max lost two positions on the opening laps to find himself ninth. Gustavo was right on his tail from then on, and the pair worked their way up to finish fourth and fifth. The race was neutralised three times by the safety car. The first of these came when Jordan King spun off right after Max had overtaken him on the outside of turn two. The race was restarted and neutralised again twice more. The last of these restarts proved fatal for Esteban Ocon and Felix Rosenqvist as they crashed out together after the restart. Furthermore, race leader Antonio Giovinazzi (Yagonya Ayam) was penalised for an infringement of the safety car regulations, costing him his maiden win. Thanks to all the hassle in front, all VAR cars moved up the order. Even Jules managed to sneak into P9 with a very strong performance, thereby rectifying the unfortunate events in race one.

In the afternoon, the VAR boys started once again in the midfield. Max, having started fifth, fought himself to third, once with an amazing overtake on Jake Dennis on the outside. Both drivers showed amazing skills in that battle, but Max just edged it. Once again though, the stewards penalised him for his final overtake on Antonio Fuoco to snatch third. This time, it cost him all points and unfairly ruined an opportunity to further close the gap on championship leader Ocon, who again failed to score. Gustavo saved the day with a good P8 from thirteenth, but the overall feeling was one what could and should have been.

Van Amersfoort Racing is back in action in two weeks at the NÃ¼rburgring from August 15 till 17. This is the last race before the break and everyone is determined to achieve a great result there.