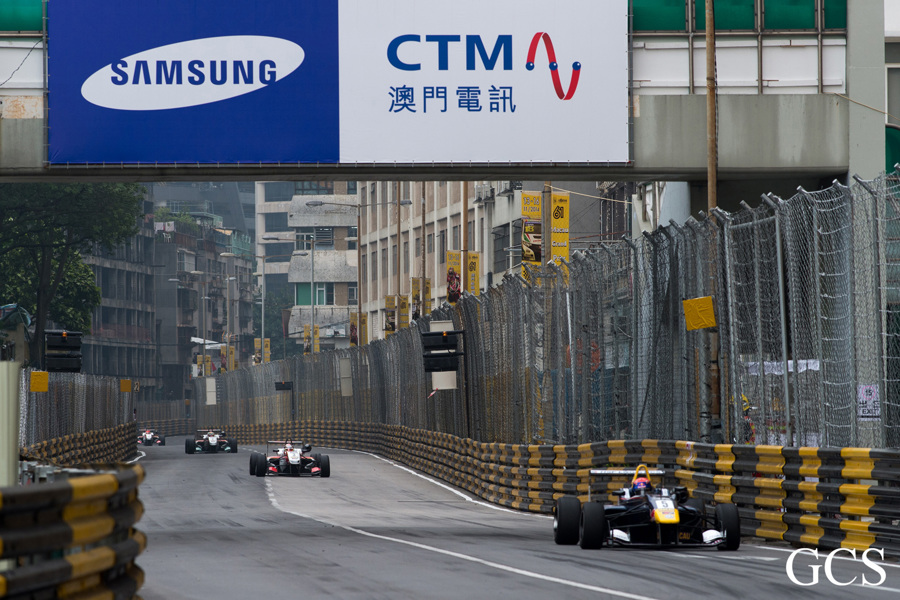 Max Verstappen set the third fastest time at the 2014 Macau Grand Prix Qualifying with a last gasp flying lap. He was narrowly beaten to pole by Mücke Motorsport’s Felix Rosenqvist and European F3 Champion Esteban Ocon (Prema Powerteam). Our American driver Gustavo Menezes had a difficult second qualifying session and had to settle for 24th position.

During the first qualifying session on Thursday both Van Amersfoort Racing drivers were still getting to grips with the tough street circuit. Yagonya Ayam with Carlin pair Tom Blomqvist and Antonio Giovinazzi set the pace throughout qualifying and locked out the provisional front row. Max was a second off the fastest lap, but still found himself in sixth. Gustavo was in 20th place after Q1. Both drivers felt there was still significant room for improvement of their times. Â

Unfortunately, our Dutchman suffered a small blow in incurring a two-place grid penalty for driving through a red light and missing a weight check. Coincidentally, his European Formula 3 Championship rival Ocon also got a penalty for the same infringement. Â

The next day, qualifying two was a tense session for VAR. During the first stint, Max improved his time from Q1 by three tenths, but struggled with traffic every lap. âSomeone was blocking me every lap, and then, when I was clear of traffic my tyres were goneâ he told after the session. In his second stint he also needed some time to find a gap, which consequently saw him drop down the order to ninth with six minutes to go. Then, after getting a good slipstream on the main straight, Max followed it up with a very good middle and third sector to move up to third place.

For Max, it proved to be just in time, because two cars crashed in the following two laps. First Stefano Coletti and then Alex Palou smashed their cars against the walls. The resulting yellow flags meant everybody was prevented from improving. That included Gustavo, who could have used those laps to find more time. The result is that he starts from Q24. After his crash, Palou managed to continue at first, but then parked his car in a dangerous area. Race control thus red flagged the session with two minutes to go, and that meant the end of qualifying. Â Â Â Â Â

Max will start Saturdayâs Qualifying Race from fifth position, due to the two-place grid penalty. With Esteban Ocon suffering the same fate, the first five grid positions will be taken up by Rosenqvist, his teammate Lucas Auer, Tom Blomqvist, Ocon and then Max. There is still all to play for, so keep track of VAR on twitter and our facebook. Tomorrow itâs time to race.