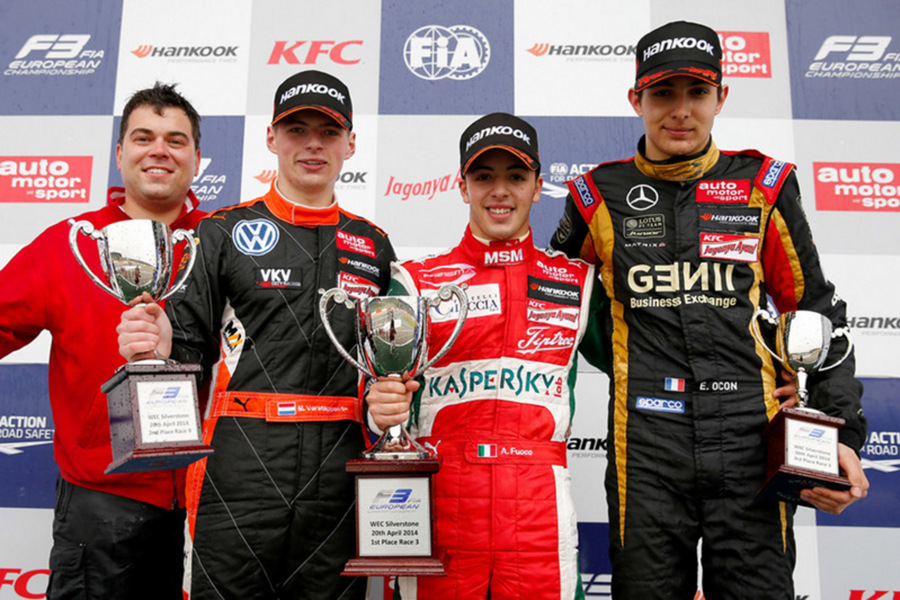 Max scores first podium of the season at Silverstone

The 2014 FIA Formula 3 European Championship season is underway after the first weekend in England. At the windswept Silverstone circuit, Van Amersfoort Racing had a weekend of mixed fortunes with a second place finish for Max Verstappen in race three being the highlight of the weekend.

The qualifying results on Friday meant all VAR drivers had work to do in the races on Saturday and Sunday. In race one, Max unfortunately suffered a clutch failure at the start bringing his first F3 race to a premature end.Â  Gustavo Menezes battled to 16thÂ position with one audacious overtake on Fortecâs Bryant-Meisner being the standout moment of his race. Jules Szymkowiak came home in eighteenth position in his first ever Formula 3 race.

The second race on Saturday afternoon brought the first points of the season with a fifth position for Max Verstappen. After dropping back to eighth having started sixth, three great overtaking manoeuvres meant a solid fifth place was achieved. A great reward for the team after having replaced the clutch in record time. Gustavo improved on his morning result with 13thÂ place and Jules Szymkowiak finished 24th.

The highlight of the weekend came in Sunday morningâs race three when Max converted a fifth position on the grid into second place with some great overtaking. After taking Premaâs Nicolas Latifi at the start for fourth he advanced to third place by taking Carlinâs Tom Blomqvist on lap two. After passing race twoâs winner Esteban Ocon (Prema) on lap eleven with a surprise pass on the inside Max drove it home for his first podium. After the race he commented: âI made a good start and I was able to battle for the top positions right away. Towards the middle of the race, my tyres started to degrade but I still maintained a good pace.â

It could have been even better for Van Amersfoort Racing had Gustavo Menezes not suffered problems with his limiter twice during the race. A strong start saw the American take ninth position but he fell back to fifteenth when the limiter came on. Menezes was fourth fastest during race three and overtook many cars to battle back towards 12thÂ position but then the limiter threw him back again, meaning he could not finish higher than 18th. âI was the fourth fastest car on track and looking very strong for points in the last race, so it was a real shame to only finish 18thâ, he commented afterwards. Jules finished a difficult first weekend in P20.

The next race weekend will take place at the Hockenheimring from 2 till the 4th of May. A 30 minutesâ review from the Silverstone season opener including exclusive behind-the-scenes footage can be seen on Eurosport on Tuesday, 29 April, at 24.00 hrs (CET). The brand-new Formula 3 Magazine will be repeated on Wednesday, 30 April, at 8.30 hrs (CET) on Eurosport 2.