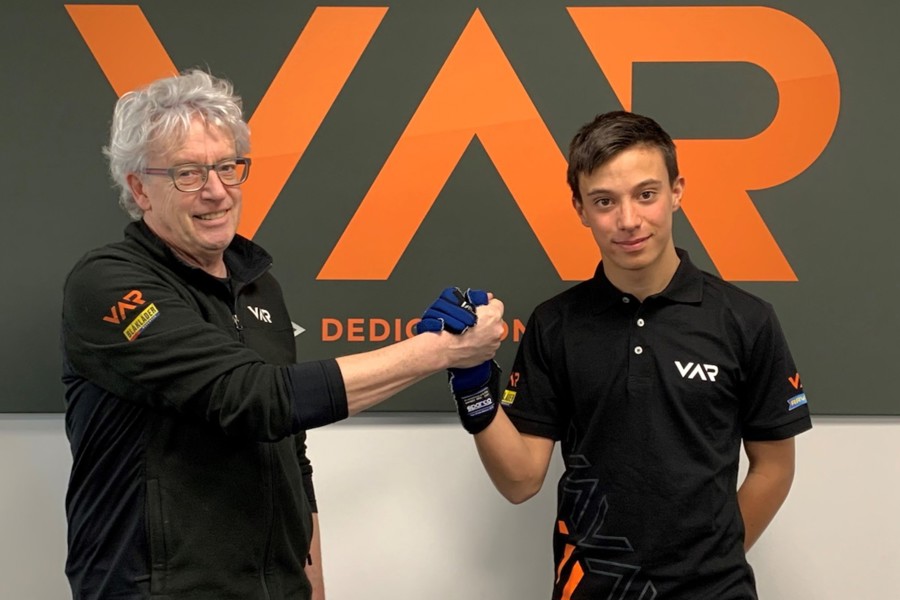 Van Amersfoort Racing is excited to announce the joining of Francesco Pizzi. The young Italian will compete for the Dutch outfit in the 2020 Italian F4 Championship, as well as selected rounds of the ADAC German F4 Championship. Pizzi will be racing alongside VAR’s Red Bull Juniors Jonny Edgar and Jak Crawford.

Unlike many in motorsports, Francesco does not come from a long line of related race drivers where one generation is followed by the next. As a matter of fact, the now 15-year-old Italian was the first in his family ever to take on the challenge of racing.Â

Having that said, it is even more special that Francesco took the wheel of a go-kart already at the very young age of 7-years-old. Only two years later Pizzi entered the ACI Sport Italian Championship, where he impressively showed off his skills by winning the round at South Garda Karting. The years thereafter are characterized by a long list of significant achievements gathered at national- and international karting championships.

Earlier this year, Pizzi made the leap into single seater racing by entering the UAE F4 Championship. His entry didnât go unnoticed as he pulled a hat-trick on what was his first F4 experience ever. Claiming the victory in all three races made Pizzi immediately the driver to beat and it stayed like that for the remainder of the series. A week before this announcement Francesco impressively clinched the F4 UAE Championship title in his maiden single seater year.

Rob Niessink, CEO at Van Amersfoort Racing:Â âWe are very excited to have Francesco on-board for the upcoming season. He was already on our radar but especially after his performance during the UAE F4 series, it was clear for us we wanted him to join VAR. He is young and very eager to compete at the next level in F4 racing. The Italian Championship is highly competitive and therefore a perfect next step for him. In addition, he will gather more experience during a selected number of rounds in the ADAC German F4 Championship. It is clear that we will support Francesco in every step of the way and the crew is very excited to get started with him.â

By taking on the Italian F4 Championship plus selected rounds of the ADAC German F4 Championship, Pizzi is able put valuable miles under his belt and get a good taste of a wide variety of high-profile circuits throughout Europe. Francesco will be sided by ex-F1 driver Gianmaria Bruni, who will offer his support to the young talent during on what still is his first year in Formula 4.

âIâm riding an incredible rollercoaster rideâÂ says Francesco Pizzi.Â âOnly one week ago I lived the highlight of my career by becoming an F4 champion in my rookie year. Now I am packing my bags to join Van Amersfoort Racing in the Italian F4 series, plus some rounds of the German F4 Championship! Becoming champion has given me an incredible boost for the new season. I am very well aware that the competition will be fierce, but I am ready and extremely motivated to be successful. I have huge confidence in VAR. Theyâve paved the road for so many greats in the sport and being part of this team only motivates me more!âÂ

The Italian F4 Championship also counts 7 race weekends with 3 races each. The series starts in May and runs through to October. The championship kicks off at the circuit of Monza whereafter the team visits Imola, Vallelunga and Misano. Round 5 and 6 take place across the Italian border at the Hungaroring and Red Bull Ring. The season finale is scheduled early October at the Mugello circuit. (dates and locations still provisional at time of this release).

The 2020 season of the ADAC Formula 4 Championship contains 7 events with 3 races each. The season kicks off at the end of April at the Motorsport Arena Oschersleben. After that the VAR F4 team visits the NÃ¼rburgring, Red Bull Ring and then returns to the NÃ¼rburgring for the second time around. Next in line is Zandvoort, located in the dunes of the Dutch coastline, whereafter the team makes its way to the Hockenheimring. The season finale takes place also at the Hockenheimring in mid-October.