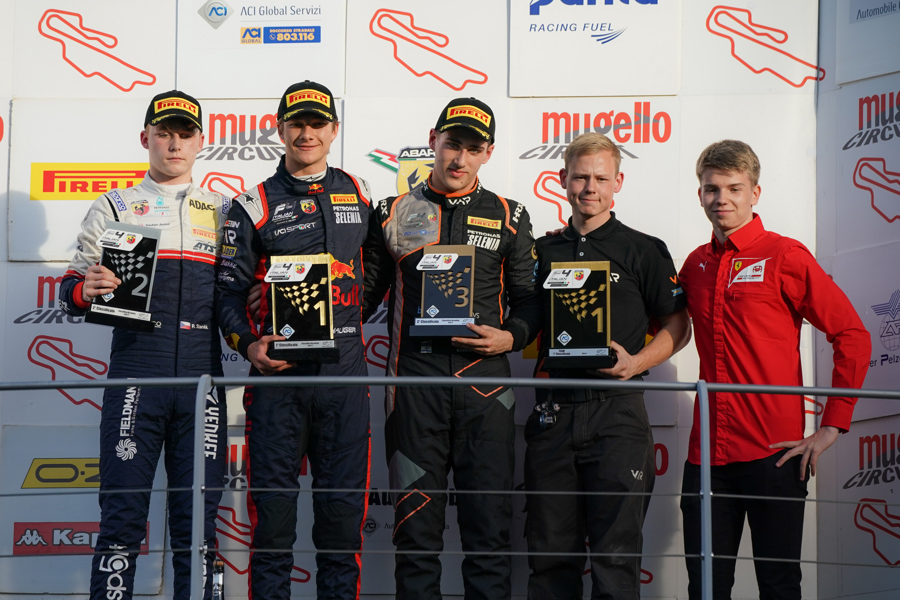 With two wins in the penultimate round of the Italian F4 Championship, Dennis Hauger practically secured the 2019 Championship Title. At Mugello the Norwegian driver of Van Amersfoort Racing turned out to be superior. Three pole positions were followed by start to finish victories in the second and third race of the weekend. Ido Cohen accompanied his teammate on the podium with a strong 3rd place in the second race on Saturday. Located in the beautiful surroundings of Tuscany, Italy, the Mugello circuit hosted the sixth round of the Italian F4 Championship. VAR appeared on the grid with Dennis Hauger from Norway, Israeli Ido Cohen and Lucas Alecco Roy from Germany. From Friday's second free practice session onwards, it was clear that Dennis Hauger was on a mission. A very strong qualification performance gave him pole position for each of the three races to come. During the qualification sessions Ido Cohen was the second-best performing VAR driver with securing a third position on the starting grid for race 2. Securing the championship as quickly as possible was this weekend's main goal for Dennis. The hunt for the title was however slightly disrupted after an incident during the opening race. Shortly after a safety car intervention, Hauger's main rival in the title fight, Gianluca Petecof, missed his braking point while trying to pass Dennis. Both cars made contact which caused Dennis to spin out. Despite dropping to the back of the field, Hauger was able to regain momentum and eventually finished in 11th position. Petecof was handed a 10-second time penalty for the incident with Dennis, ultimately classifying himself way outside point range. Therefore, no harm was done to Hauger's lead on Petecof in the championship rankings, it just caused a slight delay in achieving his final goal. For the remainder of the weekend, Dennis turned out not to be distracted by the results of race one. In flawless style the Red Bull junior won both the second and third race with a start-to-finish victory, including setting the fastest race laps. Especially during the final race Dennis showed the world why he is about to definitely clinch the Italian Formula 4 Championship title; He crossed the finishing line with a clear margin of 9.6 seconds over the runner up. In the championship standings Dennis has a practically unbeatable 83-points lead on Petecof, but the title can only be securely cashed in during the season's finale at Monza. Ido Cohen also made his mark during this penultimate round of the Italian Formula 4 Championship. After a P11 in the first qualifying, the young driver from Israel impressed with a flying lap of 1:46,894 min, putting him on second row for race 2. His second-best flying lap, determining the start position for race three, proved fast enough for P8 on the starting grid for the final race. After a P7 in the opening race, Ido remained focused at the start of the second race. He was able to maintain his starting position for the first part of the course, but as the race progressed, the young Israeli dropped back to P6. Followed by an impressive offensive, Ido managed to win three positions in seven laps. The reward was a well-deserved third place, marking his third podium result in Italian F4 Championship. It also resulted in two Van Amersfoort Racing drivers on the podium with Ido on P3 and Dennis on P1. In the last race Ido just missed out a third top 10 finish, classifying as 11th.  In a field of 27 cars, Lucas Alecco Roy created the opportunity to secure championship points with two times P14 on the grid for the second and third race. In the races the German driver was quite unlucky with two DNF's. In the final race things looked promising when Lucas made a leap forward from P14 to P10. Unfortunately, he then dropped back to P20. Not giving up, Lucas managed to fight his way back up again to P17; his personal best of the weekend.   Rob Niessink, CEO of Van Amersfoort Racing: "it is great to see how the championship is unfolding. Dennis and the team managed the weekend impressively. The excellent third place of Ido in the second race was very much deserved as well. Lucas on the contrary had a tough weekend which was unfortunate for both him and his direct crew. All-in-all though, we had a good weekend with an even better outlook towards the next and final round at Monza."  Race weekend summary Mugello Qualification 1:Hauger P1, Aron P2, Petecof P3, Cohen P11, Alecco Roy P22Qualification 2:Hauger P1, Stanek P2, Cohen P3, Alecco Roy P14Qualification 3:Hauger P1, Dürksen P2, Aron P3, Cohen P8, Alecco Roy P14Race 1:Aron P1, Ferrari P2, Edgar P3, Cohen P6, Hauger P11, Alecco Roy DNFRace 2:Hauger P1, Stanek P2, Cohen P3, Alecco Roy DNFRace 3:Hauger P1, Aron P2, Dürksen P3, Cohen P11, Alecco Roy P17 Championship standings:Drivers: 1. Hauger 305, 2. Petecof 222, 3. Dürksen 197, 6. Cohen 116, 17. Alecco Roy 21.Teams: 1. Van Amersfoort Racing 485, 2. Prema 475, 3. BWT Mücke 200.