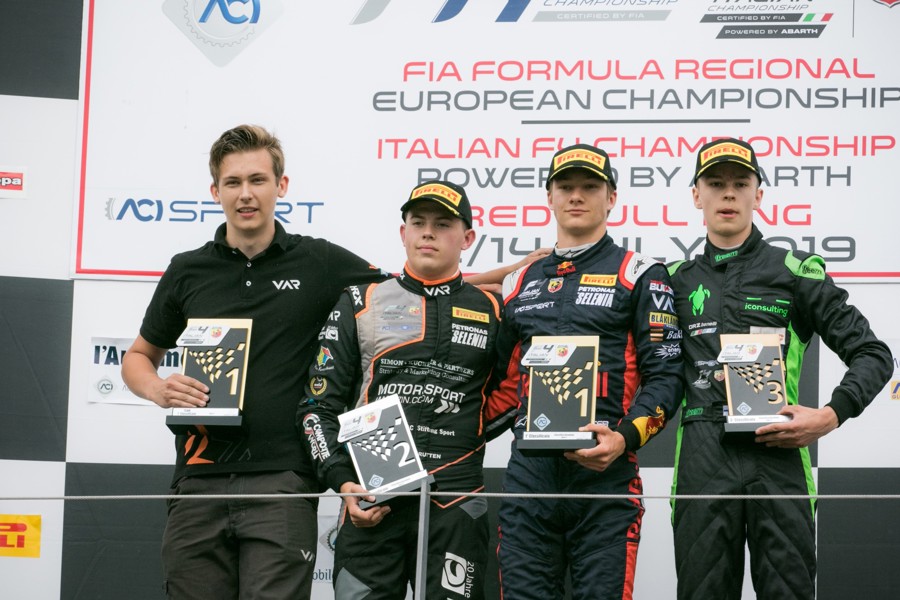 From Hungary to Austria. One week after a successful weekend at the Hungaroring, Van Amersfoort Racing was present at the 4th round of the Italian F4 Championship at the Red Bull Ring. And indeed, it gave us wings: One victory, three 2nd places, one Pole Position and one fastest race lap. Like seen in the last Formula 1 race, the Red Bull Ring is one of the circuits where race drivers can show their true talents. Our gang of four, Dennis Hauger (Norway), Niklas Krütten (Germany), Ido Cohen (Israel) and Lucas Alecco Roy (Germany), were very motivated to perform at their best. In both qualifying sessions it was Niklas Krütten who was the fastest VAR driver on track. In Q1 he was third fastest and in Q2 the talented German outpaced everybody with a flying lap of 1:30.674 min., resulting in a well-deserved Pole Position. Dennis Hauger got confronted with traffic in both sessions. The speed was there but could not be transformed into hot laps. Very encouraging to see: in Q2 all our drivers were among the 11 fastest in this competitive field of 32 cars. In the first race Niklas Krütten proofed razor sharp and battled for the victory the entire race. Eventually Niklas finished in excellent second position. Dennis Hauger took a solid fifth to decrease his point gap in the championship. Both Ido Cohen, who battled his way forward from 15th to 7th, and Lucas Alecco Roy who moved from 17th to 12th made impressive leaps forward. On Sunday morning we celebrated two VAR drivers on the podium. In a tumultuous second race, pole sitter Niklas Krütten showed his pace all race long. The final stage of the race was made up by a battle between Hauger and Krütten. A minor error after a safety car period gave Dennis Hauger, who started from 5th, the opportunity to pass Niklas in the final lap, crossing the line in 1st position. Niklas Krütten followed marginal in second place. In his way to the lead Hauger also set the fastest race lap. Ido Cohen again finished well in the top 10, being 7th. Lucas Alecco Roy finished 13th of the 24 remaining competitors. The final race at the Red Bull Ring was also an action-filled event. It was again Dennis Hauger who maximized his result. He made a strong start from 5th on the grid and managed to climb to second position in a mature and calculated drive. Knowing his competitor in the battle for the championship was in fourth, Dennis closed the point gap with the leader to only 4 points.  In the final race our other three drivers did not get out of the chaos unharmed. Damaged front wings, punctures etc. caused an extra visit to pitlane, compromising their results substantially. Rob Niessink, CEO Van Amersfoort Racing: “From a team perspective it was another very positive weekend for us. Two drivers on the podium, including a win. Securing a pole position with Niklas and a fastest race lap indicates that as a team we are doing a solid job. It is also great to see that Dennis is closing on the championship lead after two strong weekends. I want to compliment Ido Cohen. After a technical issue in FP1 and being eliminated of the track by another driver in FP2 he managed to strongly regain his focus in the first two races.” Race Weekend Summary: Qualification 1:Stanek P1, Aron P2, Krütten P3, Hauger P6, Cohen P15, Alecco Roy P17Qualification 2:Krütten P1, Carrara P2, Salmenautio P3, Hauger P5, Cohen P7, Alecco Roy P11Race 1:Aron P1, Krütten P2, Dürksen P3, Hauger P5, Cohen P7, Alecco Roy P12Race 2:Hauger P1, Krütten P2, Salmenautio P3, Cohen P6, Alecco Roy P13Race 3:Carrera P1, Hauger P2, Aron P3, Krütten P27, Alecco Roy P28, Cohen P30 Championship standings:Drivers: 1. Petecof 169, 2. Hauger 165, 3. Aron 92, 5. Krütten 78, 7. Cohen 69, 15. Alecco Roy 20.Teams: 1. Prema 301, 2. Van Amersfoort Racing 298, 3. BWT Mucke 155.