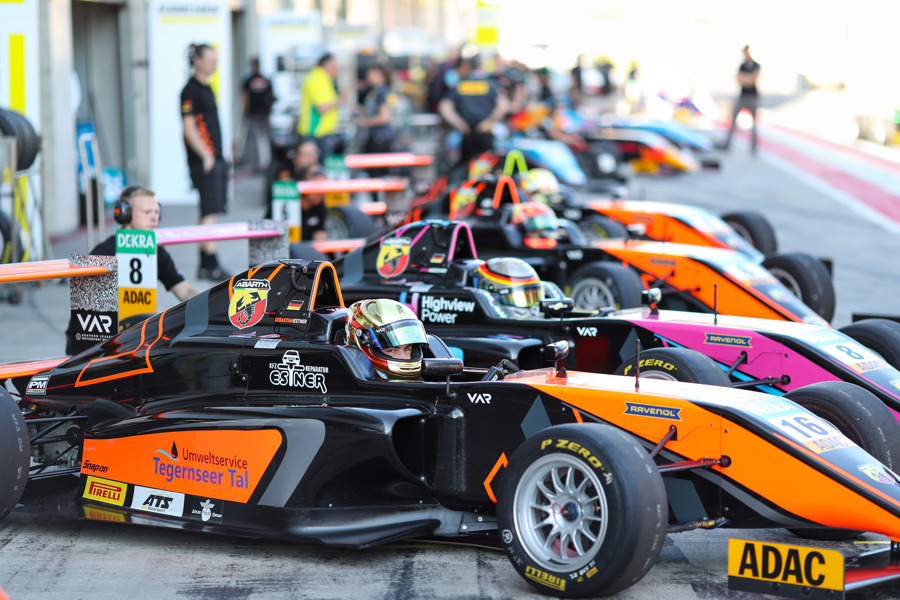 Van Amersfoort Racing invests a great deal of time in the meticulous preparation of its drivers and racing cars. During the second round of the ADAC F4 Championship at the Red Bull Ring in Austria it showed we turned out to be dominant in terms of absolute speed. The double pole position, the victory in Race 1, the second place in Race 3 and fastest laps in all 3 races only tells the story partially. Located in the beautiful surroundings of the Spielberg region, the Red Bull Ring is an atypical circuit on the calendar. The track counts 4,318 km and is filled with serious elevations and long straights that are connected by both technical slow and equally demanding fast corners. This specific setting suits Van Amersfoort Racing’s drivers well, of which the double Pole Position for Hauger is proof.     After being fasted in the second free practice, Norwegian Dennis Hauger continued to display his raw talent. The Red Bull junior completed the clean sweep during qualifying with only two flying laps. Niklas Krütten was the next VAR driver, qualifying P6 for Race 1. During the second qualifying, Ido Cohen performed very well by securing 4th position on the starting grid. Right from the start of Race 1 Dennis Hauger created an impressive gap between himself and his competitors. After a safety car situation brought the field back together, Dennis stroke again by immediately creating a massive gap following the restart. Dennis took the win with the fastest race lap. Niklas Krütten (P8) and Ido Cohen (P10) collected healthy championship points with their top 10 finishes. In Race 2 Ido Cohen scored his best result of the weekend with his fifth place. Dennis Hauger would have collected his second win of the weekend if he had not received a 30-second time penalty after the race. The Norwegian crossed the finish line with a clear margin but was penalized for setting a fastest sector time under yellow, which pushed him back to 14th position in the rankings. After his 8th place in the second Race, Niklas Krütten was the pole sitter for Race 3. The German was in the lead for almost the entire race and kept cool during the three restarts. At the checkered flag, Niklas crossed the line in second position. Starting from 13th on the grid, Dennis Hauger fought his way to the front where he met his teammate Niklas Krütten. In the battle for the lead, the two made contact. With a flat front tire Dennis had to pit and 23rd place was the result. Lucas Alecco Roy completed the triple for Van Amersfoort Racing by setting the fastest lap in Race three. Rob Niessink, Van Amersfoort Racing CEO: “It was very encouraging to see that we dominated in terms of pure speed. We are happy with a victory and a second place, but our competitiveness could have been converted into even more results. Unfortunately Niklas and Dennis made contact in the last race. Regardless the reason, such should of course be avoided between teammates under all circumstances. Racing is also about bringing home a good result home.” Race Weekend Summary: Qualification 1:Hauger P1, Ghiretti P2, Stanek P3, Krütten P6, Estner P7, Cohen P15, Alecco Roy P20Qualification 2:Hauger P1, Pourchaire P2, Farmularo P3, Cohen P4, Krütten P13, Estner P15, Alecco Roy P16Race 1:Hauger P1, Ghiretti P2, Alatalo P3, Krütten P8, Cohen P10, Estner P11, Alecco Roy P21Race 2:Pourchaire P1, Alatalo P2, Leclerc P3, Cohen P5, Krütten P8, Alecco Roy P12, Estner P13, Hauger P14Race 3:Aron P1, Krütten P2, Pourchaire P3, Cohen P13, Estner P16, Alecco Roy P19, Hauger P21  Championship standings:Drivers: 1. Pourchaire 69, 2. Krütten 69, 3. Leclerc 62, 9. Hauger 40, 14. Cohen 15, 15. Estner 4. Teams: 1. US Racing – CHRS 149, 2. Van Amersfoort Racing 146, 3. Prema Powerteam 128.