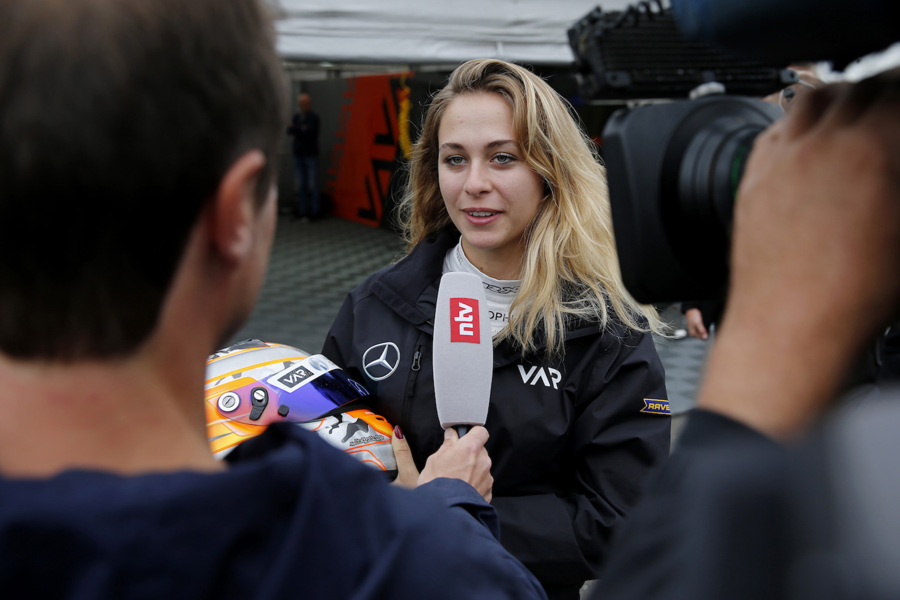 The penultimate round of the 2018 FIA Formula 3 European Championship took teams and drivers to the mountains of Styria where the Red Bull Ring in Austria hosted the ninth triple-header race meeting of the season.  The trip to Austria was a successful one for Van Amersfoort Racing’s lady racer Sophia Flörsch, who scored her maiden championship point by finishing tenth in the second race. Generally, however, changeable conditions made the weekend a difficult affair. The weekend got off to a promising start for the Van Amersfoort Racing drivers as Keyvan Soori Andres was classified ninth in first free practice. Sophia Flörsch ended up twelfth and came within merely 0.05 seconds of a top ten classification, another proof of how close competition in the FIA Formula 3 European Championship is. Artem Petrov, who ended up 16th, was only 0.12 seconds short of a top ten result. In second free practice, Keyvan was the best-placed VAR driver in 14th place, followed by Sophia in 19th and Artem in 20th place. Qualifying for the first race of the weekend followed later on Friday afternoon. This time, Sophia led the way for Van Amersfoort Racing with 18th place, one position ahead of Keyvan and three places ahead of Artem. The lap times of the first 20 drivers in the field were covered by less than one second. Practice and qualifying having taken place in nice and warm conditions on Friday, the situation was a totally different affair on Saturday morning as the first race of the weekend got underway on a soaked track after rain showers. Artem had an excellent start and moved up to eleventh place on the opening lap, but dropped back on the following tour of the circuit. Thus, Sophia secured the best result for the Dutch team with her 17th place finish, one position ahead of Kyvan. Artem was classified 21st.

In a closed team performance in second qualifying, Artem and Keyvan ended up 17thÂ and 18thÂ respectively, their lap times only 0.074 seconds apart. Sophia qualified 20th. In the ranking of the second-fastest laps to determine the starting grid positions for the third and final race of the weekend, Keyvan was 16th, Artem 18thÂ and Sophia 20th.
Â
For Keyvan, race two was already over after a few hundred metres. He became involved in a collision with an opponent and had to park his car with severe damage to the left front suspension. Artemâs race lasted longer, but on lap 17, he got involved in a collision as well and also saw his race end prematurely.Â Â Sophia, on the other hand, made great progress from 20thÂ place on the grid. Unlike several others in the field, she managed to stay away from all the incidents in the action-packed race and found herself classified tenth as a result. Thus, she officially opened her championship pointsâ account for the season, even though she only joined the series in the fourth meeting of the year.
Â
The third race of the weekend brought little action, but still, the VAR drivers again made good progress with a closed team performance. Keyvan was classified 13th, Artem 14thÂ and Sophia 15th.

Â
The season finale will be held at the Hockenheimring Baden-WÃ¼rttemberg, 12-14 October

Â
Frits van Amersfoort, Team owner at Van Amersfoort Racing: âThis weekend, we have had all sorts of weather, apart from snow. It was like summer with bright sunshine and high temperatures on Friday, it was cold and wet on Saturday morning, but then dry for qualifying and still damp on Sunday morning for race two, followed by high temperatures again for race three. Of course, seeing Sophia score her first championship points was a highlight and a nice reward for her efforts. Due to her lack of mileage as she only joined the series in July, it has always been difficult for her to catch up, but the potential is certainly there. Too bad about the collisions for Keyvan and Artem in race two. Now, we are preparing for the season finale at Hockenheim where we hope to end the season on a high.â