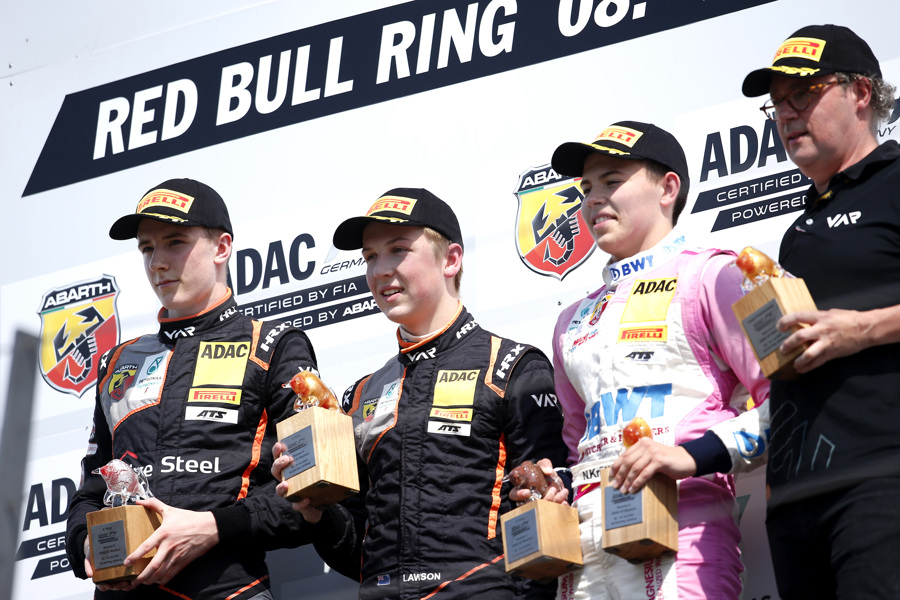 Save the best for last at the Red Bull Ring

Our five youngsters were on the move at the Red Bull Ring during the fourth round of the German ADAC Formula 4. At this spectacular and hilly track in Austria the best was saved for last: after two podium results in the opening race, Liam Lawson and Frederik Vesti scored a dominant 1-2 victory in the final race.

The majority of F4 race drivers rank the Red Bull Ring as one of the most exciting tracks on the calendar. It is an addictive mix of slow and fast corners, technical sections, up- and downhill racing and a long straight. In this environment all our drivers performed excellent in both qualifying and three races.

Most illustrative was the domination in the final race. On pure race craft it was Liam Lawson who found his way from third on the grid to the leading pack. The 16-year-old driver from New Zealand was able to out-brake his opponents in a hand full of laps. Resulting in a dominant win, making it his third victory of the season so far.Â

In his wake, teammate Frederik Vesti converted his fourth position on the grid into an excellent second place by some daring passing maneuvers. The final race also marked the best weekend result of Dutchman Joey Alders. After being unlucky in the first two races, it was the third race in which he collected the last available championship point by finishing in tenth position.

On Saturday morning Frederik Vesti secured second place in the opening race at the Red Bull Ring, where Liam finished third. Charles Weerts rewarded himself for his excellent sixth fastest time in qualifying by making it into the top five. For the third time this season the German Lucas Alecco Roy finished in the top ten. This result shows that Lucas is making up lost ground in his second season in motorsport.

Sudden rainfall caught us by surprise during qualifying, forcing our drivers to start all outside the top five for the second race on Saturday afternoon. Although not quite visible in the final results, both Frederik and Liam made the show. The Dane ended as fifth from P9, the New Zealander spun in the opening round and battled his way from very last to sixth position by passing many opponents with style.

After the fourth event Liam Lawson is still the runner up in the championship. He reduced the gap to leader Lirim Zendeli to 24 points. His continuous progress gives a confidence boost for the forthcoming three events. Frederik Vesti took over fifth position in the standings from his teammate Charles Weerts. Joey Alders is still third in the ADAC F4 Rookie Cup. In the team standings we are closing the gap to US Racing.

Jeroen the Jong, team manager of VAR's F4 team: "In terms of competitiveness, this weekend was one of the best of the season so far. In Q1 four of our drivers where in the top 11 and in all races our drivers had the pace to attack for positions. The driving of both Frederik and Liam was impressive, resulting in an excellent 1-2 result in the final race. Charles scored healthy points in two races. Joey and Lucas managed to score points, where Joey also finished in third among the rookies. With three weekends to go, the run for the championship title will be exciting for sure."

The complete results can be found here.
Â