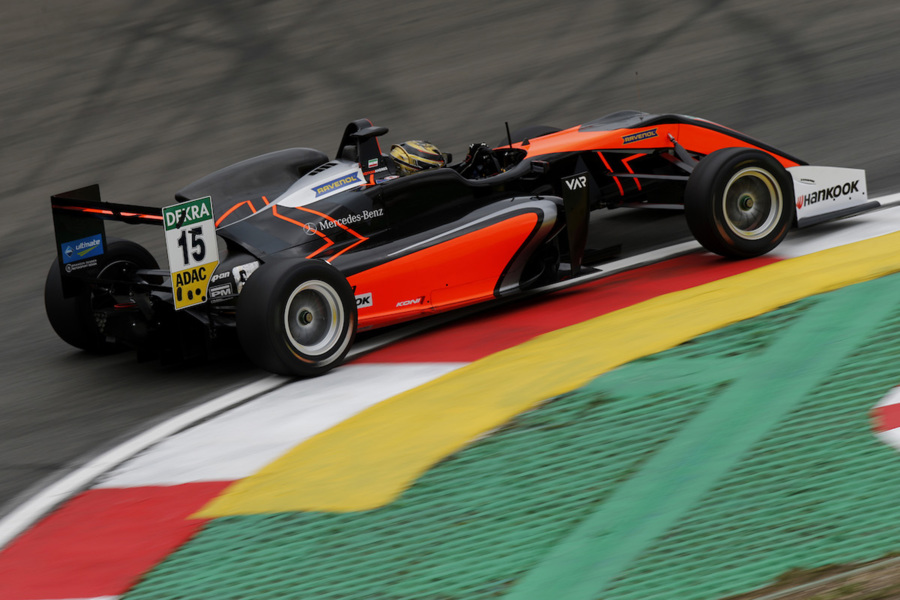 Promising speed for Van Amersfoort Racing at the ‘Ring

The Nürburgring in the German Eifel region served as the venue for the eighth race weekend of the 2018 FIA Formula 3 European Championship. The third race of the event marked the 200thrace of the European Championship in its current iteration. Even FIA president Jean Todt was present for this special occasion. The three drivers of Dutch team Van Amersfoort Racing showed promising speed at the ‘Ring.

The weather is always a major talking point at the NÃ¼rburgring as the Eifel often seems to have its own microclimate. It was pretty chilly on Friday, but the sun came out for most of Saturday and Sunday to provide good conditions for the drivers and the numerous spectators that had come out to attend the DTM and Formula 3 event at the legendary venue.Â

On-track activities started around noon on Friday with a pair of free practice sessions. In the combined results, Keyvan Soori Andres was the best-placed VAR driver in 15thÂ position, three places ahead of Artem Petrov and five places ahead of Sophia FlÃ¶rsch. As usual, the gaps were small, but qualifying produced even more closely-matched lap times with the first 20 drivers in the field covered by only one second. Artem flew the flag for the Dutch team with his 15thÂ place while Sophia qualified 18thÂ and Keyvan 21st.Â

The first race of the weekend got underway with an incident involving several cars on the opening lap, followed by an intervention of the safety car. While the race was already over for five drivers, all three Van Amersfoort Racing drivers managed to steer clear from the swerving cars, making good progress as a result. Behind the safety car, Artem was running sixth, Sophia was eighth and Keyvan was eleventh and a promising result looked on the cards. However, once racing had resumed, Artem was called in for a drive through penalty because of a jump start while Sophia retired due to a technical issue. Thus, Keyvan emerged as the best-placed VAR driver and finished tenth to add one championship point to his total. In spite of his penalty, Artem was still classified 15th.Â

Second qualifying to determine the starting grid positions for races two and three was held on Saturday afternoon with Keyvan setting the pace for the VAR drivers in 15thÂ place, followed by Artem in 20thand Sophia in 21stposition. In the ranking of the second-fastest laps, decisive on the grid positions for the third and final race of the weekend, Keyvan ended up 14th with Sophia in 20thÂ and Artem in 21stÂ place.

In the second race, all three VAR drivers made good progress compared to their grid positions, resulting in a twelfth-place finish for Keyvan. He finished one position ahead of Artem and three places ahead of Sophia, who saw her chances of a better result ruined as she was tapped into a spin by an opponent. Race three saw Keyvan finish 15thÂ from Artem in 17thÂ and Sophia in 21stÂ place. The German showed her competitive spirit, but was handed a drive-through penalty for causing a collision and incurred a three-place grid drop penalty for the next race for a similar infringement.Â

The next round of the FIA Formula 3 European Championship is scheduled at the Red Bull Ring in Spielberg, Austria, 21-23 September.

Rob Niessink, CEO of Van Amersfoort Racing: âRacing at the NÃ¼rburgring is always nice, especially in front of such a good crowd as we had over the weekend. Once more, this showed the strength of the DTM and F3 package. Again, we have seen all our three drivers making good progress as the weekend went on, but the same applied to the other drivers in the field. In the highly competitive environment that is the FIA Formula 3 European Championship, differences are very small and that means that every little detail counts. Therefore, the lack of experience for Sophia and Artem as two rookies in the field becomes apparent and it is difficult to make up for that during the season as the rest of the field is moving ahead as well. Then again, it was nice to see them do well in the race on Saturday, avoiding all the troubles on the opening lap, unlike several others. Drive-through penalties didnât really help and neither did Sophiaâs technical issue in the first race, but we are now looking ahead again to the next round in Austria!â