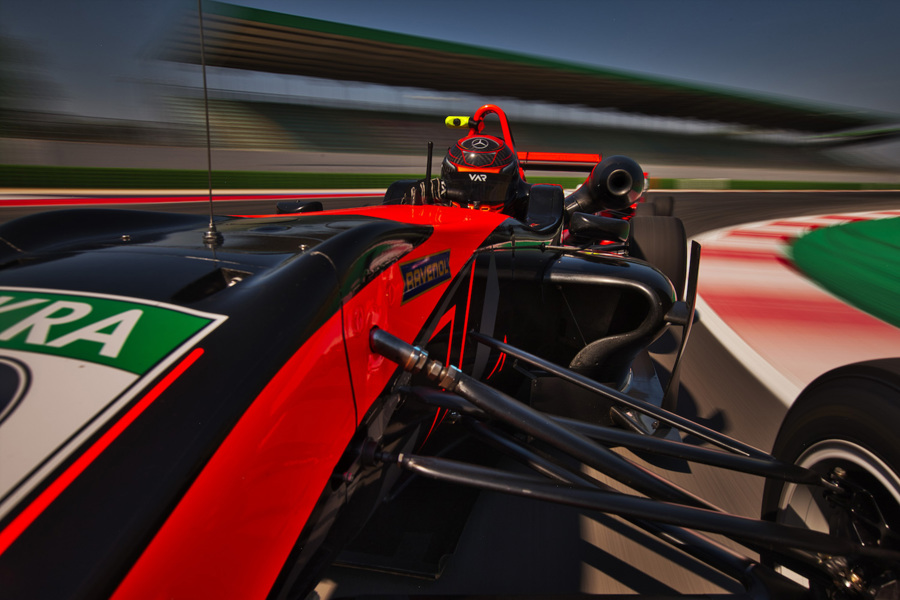 A weekend of learning for the VAR drivers at Misano

Only one week after the meeting at Silverstone, the FIA Formula 3 European Championship already had its next round at the Misano World Circuit Marco Simoncelli on the Adriatic coast in Italy. For the three drivers of Dutch team, Van Amersfoort Racing, it was a weekend with many new experiences and therefore plenty of learning.

Having back-to-back weekends in the UK and Italy required a considerable logistical effort by the team. âAfter the races at Silverstone, the team stayed there in the paddock all day on Sunday to prepare the cars for Misano,â team principal Frits van Amersfoort said. âWe then had to leave Silverstone late on Sunday evening and the trucks headed for Misano. We made the crossing through the Eurotunnel, then took the route to France and the FrÃ©jus tunnel for Italy. The trucks and trailers arrived at Misano Wednesday afternoon.â

The FIA Formula 3 European Championship was part of the support package of the DTM at Misano and as the German touring car series had its first-ever night races there, the time schedule for the event was totally different from other race meetings, which affected Formula 3 as well. On the three days, action only started in the afternoon and ran well into the evening, quite unusual for the teams and drivers in F3.

For Sophia FlÃ¶rsch, Artem Petrov and Keyvan Soori Andres, the three Van Amersfoort Racing drivers, the Misano World Circuit Marco Simoncelli was known territory as they all had participated in the official two-day pre-season test of the FIA Formula 3 European Championship at the venue in April. Nevertheless, conditions were quite different this time, with hot conditions on Friday and still fairly high temperatures, but rain on Saturday and Sunday.Â

In the combined result of the two free practice sessions, Artem was tenth as the best-placed VAR driver while Sophia and Keyvan followed in 19thÂ and 20thÂ place. In qualifying for race 1, Artem was 18thÂ and Sophia 20thÂ while Keyvan was one of seven drivers to have a lap time disallowed for a track limit infringement, a situation often seen at Misano. As a result, he ended up 22nd. In the first race, Artem finished 13thÂ with Sophia in 16thÂ and Keyvan in 19thÂ place.

After qualifying for the weekendâs other two races, many drivers were handed grid penalties for track limit infringements. Sophia started 17th, Artem 21stÂ and Keyvan 22nd. Rain in the early afternoon made the track still damp for the second race with thick clouds indicating that there was more to come. It made the tyre choice something of a lottery. Together with a number of competitors, all three VAR drivers started with rain tyres, but that turned out to be the wrong choice. As a result, all had to visit the pits to change. Artem also incurred a drive-through penalty for contact with another driver, but still managed to finish 17th, followed by Keyvan and Sophie in 18thÂ and 19thÂ place respectively.

Because of heavy rain, race three got underway behind the safety car with Artem, Sophia and Keyvan in 17th, 19thÂ and 20thÂ place on the grid. After two laps, however, the race was red-flagged and the drivers waited for 25 minutes for conditions to improve. They did indeed and once the drivers went out again, once more behind the safety car, another 15 laps could be completed. Artem ended up 15thÂ with Keyvan 17thÂ and Sophia 18th. When the chequered flag was out at 19.40 hrs, it was already quite dark at the track so that the race could almost be considered as a night race, just like in the DTM.

The next round of the FIA Formula 3 European Championship is scheduled at the NÃ¼rburgring in the German Eifel region, 7-9 September.

Rob Niessink, CEO of Van Amersfoort Racing: âIt was anything but easy this weekend with a totally different time schedule, mixed weather conditions including heavy rain and the final race on Sunday that almost ran in the dark. As Misano is a circuit that is mostly used for motorcycles, the kerbstones are flat here and that means that track limits often are an issue. This already became clear in pre-season testing and the problems again came up this weekend including many penalties that affected us as well. In race two, the tyre choice was difficult and in race three, we had a red flag because of the rain, but it was a good decision to wait as conditions improved. So many different situations are also part of the learning process for our drivers. Now, we are looking forward to the next round at the NÃ¼rburgring, another circuit where you often have changeable conditions, so letâs hope that this weekend was a good preparation for that!â