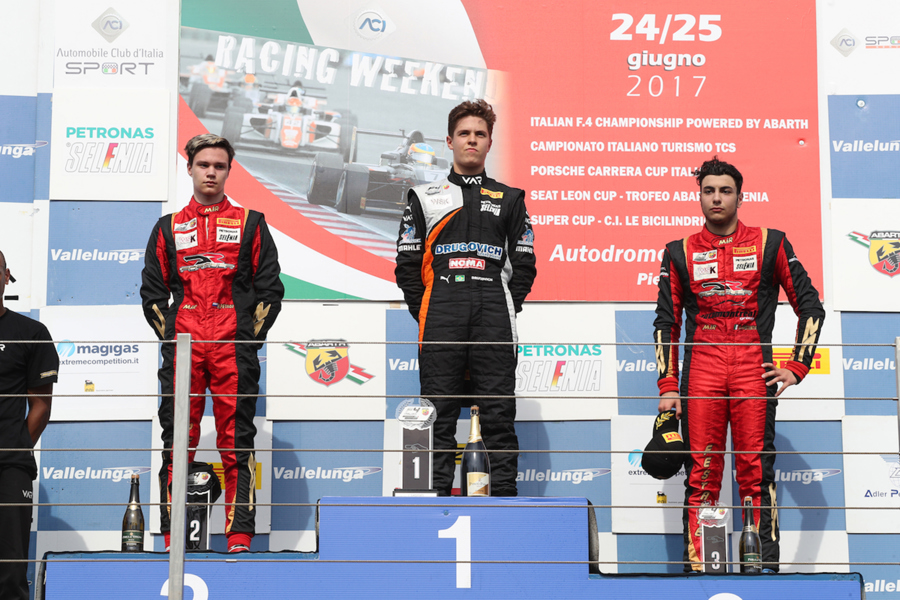 Nothing beats real racing. So the Van Amersfoort Racing Fomula 4 squad added another round of the Formula 4 Italian Championship to the calendar. We arrived at the demanding Vallelunga circuit for a real challenge because we never ever raced or tested there before with the F4. Sunday afternoon the result was more than satisfying: one victory, one third place and one top 10 result with both cars.

Giving youngsters the tools to develop into professional racing drivers is what Van Amersfoort Racing drives since 1975. Testing is very useful, but racing at an event is even better. So we took our Brazilian boy Felipe Drugovich and Briton Louis Gachot to Vallelunga near Rome to compete in the competitive Italian Formula 4 organized by WSK.

The official testing days at the track near Rome clashed with our main target: the ADAC Formula 4 championship in Germany. So the Van Amersfoort Racing preparation for Felipe and Louis was a simulator session at our headquarters in Zeewolde. In free practice one the VAR drivers were thrown in at the deep end and by the time the qualifying session started they found the speed to match their far more experienced Italian opponents. With a P4 for Felipe and P11 for Louis as best results.

Felipe proved a fast learner literally. After securing fourth place (from P10 on the grid) in the opening race, stepping on the podium as the P3 in the second race, the talented Brazilian (17) showed his skills in the final race. From fourth position he managed to take the lead half way. From that moment on Felipe made giant steps forward: in 10 laps he and opponent Artem Petrov managed to make a margin of 7,3 seconds on the number three. His superb victory got even more glance by setting the fastest lap time.

Also Louis found his rhythm at the track which combines large straits with narrow twisty sectors. In the first two races his progress was double crossed by unavoidable contact. During the second race for instance the Briton got hit by another driver causing a flat tire while driving in seventh place. In the final race Louis finally got rewarded for his hard work with a steady P10, resulting in a double top 10 result by Van Amersfoort Racing.

Jeroen de Jong, team manager Van Amersfoort Racing Formula 4 squad: âIt was quite a challenge for the both the team and the drivers. And that was exactly why we travelled to Vallelunga. There was no escape: we had to learn fast. Felipe and Louis did an excellent job. The way Felipe managed to win the last race was really something special. Two podium results plus a strong final race by Louis resulting in a double top 10 finish, is a splendid result. A real compliment for both our drivers and our entire team."Â