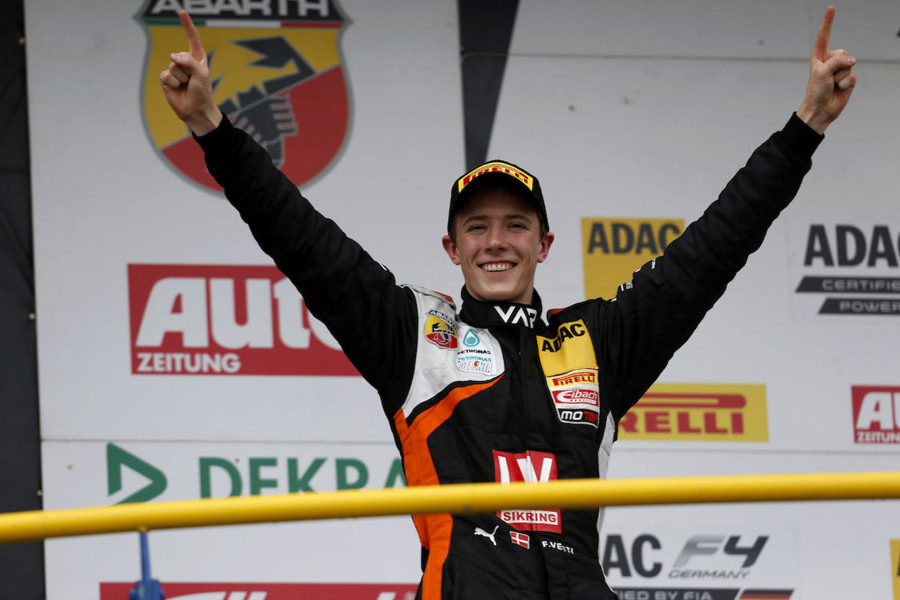 The German ADAC Formula 4 championship had their halfway season appointment at the demanding racetrack of Oschersleben. In three races Van Amersfoort Racing managed to score two victories: Felipe Drugovich won race 2, and in race 3 Frederik Vesti raced towards his first F4 victory. Felipe also stepped up the podium in the opening race.

During qualifying our Canadian youngster Kami Laliberte set the pace at the very end of the session with a sensational lap of 1:24.028 min. It marked his first pole position in F4! Felipe Drugovich followed in third. And the Brazilian boy also managed to set a very strong second fastest lap, giving Felipe the pole position for race 2.

Kami was unfortunate at the start of race 1 when he stalled his engine at the green lights and was forced to fight back from behind to p12. Felipe converted his start from p3 into his 5th podium finish of the season being third. Frederik Vesti, our Danish driver, showed his racing skills by running up from 17th position to a point scoring 9th position! Louis Gachot also worked his way up: from p22 to p17.

Felipe bagged his third win of the season after an impressive start to finish drive. After an excellent start he made his margin, controlling the race and his tyre wear from that moment on. With the reversed grid order Frederik Vesti started from the front row in the final race. The young Dane pulling off a great pass around the outside of turn 2, bringing him in the lead after the third corner.

He immediately took control of the race, making a clear margin of 3,5 seconds on his followers. A safety car interference due to an accident made that Frederik had to begin from scratch after the restart. After a well timed restart, he set immaculate pace securing his first ever win in ADAC F4 with a clear margin of 2,810 seconds.

Next best was Kami who worked his way up from p10 to P8 after also passing his teammate Felipe. It marked the best weekend performance by the young Canadian. Felipe proved less fortunate. In fifth place the winner of race 2 had to avoid contact with a competitor who suddenly slowed down, causing an excursion into the grass and losing many positions. Felipe did damage control securing a championship point in p10. Louis worked his way up to P13.

Jeroen de Jong, team manager Van Amersfoort Racing F4 team: âIn terms of team performance this was a excellent weekend. Kami showed we are among the fastest teams in terms of one lap speed. Felipe and Frederik also made clear that our race pace is winning. In general all our drivers showed great skills. If we can help Frederik and Louis to improve their qualifying performance, they will be able to battle in front. Kami is ready for more podium finishes, and Felipe is closing in on the leader of the championship. So we very much look forward to the next half of the season!â