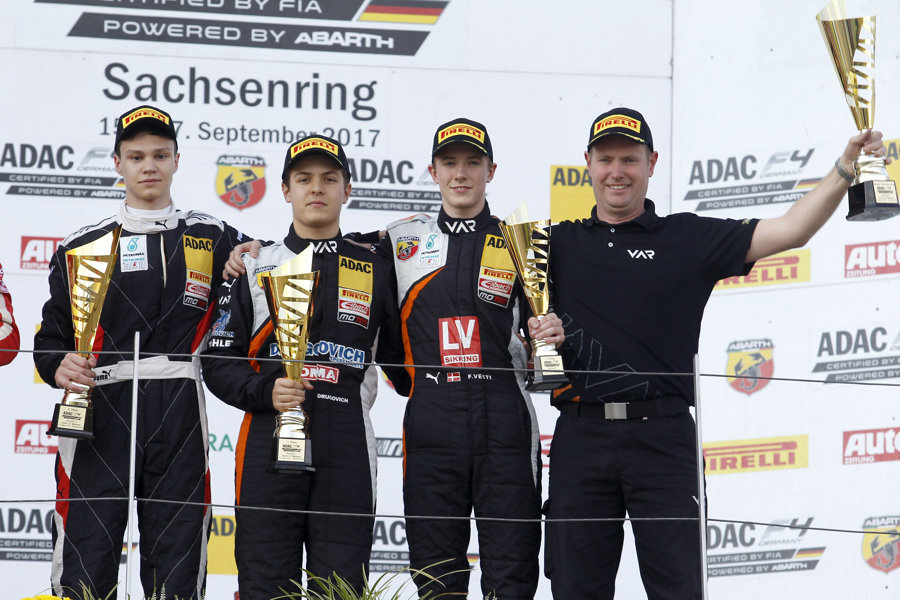 The 2017 season in German ADAC Formula 4 championship is behind us. Van Amersfoort Racing can draw up a very positive balance sheet: in 21 races we celebrated 10 victories, 14 podium finishes, 6 pole positions, won races with 4 different drivers and twice celebrated a clean sweep of the podium in finishing 1-2-3.

With his win in the first race at the Hockenheim finale Felipe Drugovich totaled his victories to 7. This impressive amount makes the Brazilian (17) the most winning driver of the 2107 ADAC F4 season. Felipe started his winning ways early in the season. In the second round of the championship at the Lausitzring he won race 2 and 3.Â

For the upmost of the season Felipe was a front runner, considering his speed Felipe deserved far more than the third place in the final standings, only 9 points short from the champion. The Brazilian driver was eliminated by a fellow competitor twice (Nurburgring and Sachsenring).Â

He also missed out the full 25 points after his win in the second race at the Nurburgring, as the race was stopped after an incident before halfway. ThereforeÂ  only half points were granted. At the final at Hockenheim a sudden problem with the battery gave him a DNS in the second race.Â

As for Frederik Vesti from Denmark: getting on board late in the pre-season, he has proved to be a very fast learner. Already in the third round (at the Lausitzring) he scored a third place, marking his first ever ADAC F4 podium result. It was at Oschersleben were the young Dane (15) outpaced everybody in the final race and showed his great potential. In the overall ranking the F4 rookie scored championship points in 12 of the 21 races and climbed the standings up to 7th (113 points).Â

Also young Canadian Kami Laliberte managed to stand out. Especially with his daring move at the Lausitzring. From 5th position Kami dived into the inside and came out as runner up. It proved a solid basement for an impressive victory. At Oschersleben Kami bagged his first ever F4 pole-positon with an ultimate flying lap. In the final standings he is 12th with 76 points.Â

Also for the new man in our team we take off our hat. Artem Petrov found his speed in no time. The Russian driver raced only two event with us and was on the podium twice. He ended his season with Van Amersfoort Racing in a high by winning the very last race of the season at the Hockenheimring. In the final standings he worked his way up to 15th in only two events.

Louis Gachot was part of the impressive 1-2-3 cleansweep at the Lausitzring. For the team it was a special result and also for the talented Englishman, because it was his first ever podium finish in the ADAC F4 Championship. Louis ended his season with a excellent fourth place in the 21st (and last) race of the season, bringing him to 16th in the final driver standings.