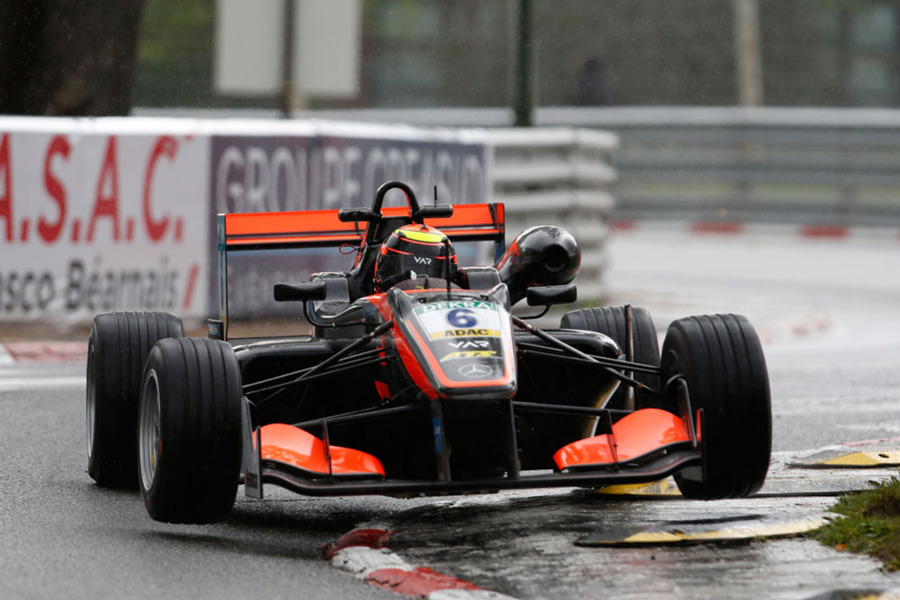 Successes in the streets of Pau

The third round of the European FIA F3 championship brought us to the beautiful scenery of the south of France. Our four young guns found the competition in their Mercedes-Benz powered Dallara F316’s on probably the most demanding track in the championship: the street circuit of Pau. At the end Van Amersfoort Racing draw up a positive balance sheet: two podium finishes and good progression in the championship standings.

Experience is extra important in the streets of Pau. It is like Monaco: the lay out of the track is like no other and since it is a street circuit, there is not much room for error and overtaking is close to impossible.

The experience from last year helped both Callum Ilott (17) and Anthoine Hubert (19) with qualification results in the top 10 for all three races. Despite their first encounter in the streets of Pau also Harrison Newey (17) and Pedro Piquet (17) constantly improved their pace despite the tricky wet conditions.

As the rain continued also the first of three races was battled out on a wet track. Callum started from 5th spot after being promoted two places. The young Briton also kept cool after the safety car went in and managed to hold on to 5th position, thus gaining healthy championship points.

Anthoine had to accept the last penalty for the engine change at the Hungaroring. It meant that our French F3 rookie had to start from 13th position instead of the 5th position. In the narrow streets Anthoine managed to win one position in the race over 25 laps. Our two Pau rookies kept out of the guard rails and collected valuable experience. Harrison finished in 15th position, Brazilian Pedro ended his first Pau race as 20th.

For the first time of the weekend the track was dry enough to fit slicks. Unfortunately the track conditions cut the ambitions of Callum short at the start. Although fastest in his group in qualifying, Callum had to start on the damp side of the track which forced him to settle for 4th into the first corner. Driving like a terrier was rewarded with his second podium finish of the season, this time as number three. Also Anthoine displayed some fine driving by converting his 10th starting position into a solid point scoring seventh. The bonus for the Frenchman came with the trophy for third place in the rookie category. Pedro and Harrison both touched the wall and were forced to retire.

On Sunday it was all about âThe Grand Prix de Pauâ. For the first time this weekend the track was entirely dry. On slicks Callum completed a strong performance in the streets. The young Briton collected 12 points with his fourth place. Anthoine missed that bit of luck for a top ten result after a slow puncture caused by debris on the track following a first corner crash of four other competitors. Changing the tire in the pit spoiled his chance of a good result, albeit he proved his speed with the second best lap time in the race. Pedro proved to be a fast learner. The young Brazilian collected a new front wing during the lengthly safety car intervention and got razor sharp when three colleagues collided in front of him: a tenth place and a championship point was a fine result on his debut in the streets of Pau. Harrison ended in 14th after some contact during the battle for 7th position. Â