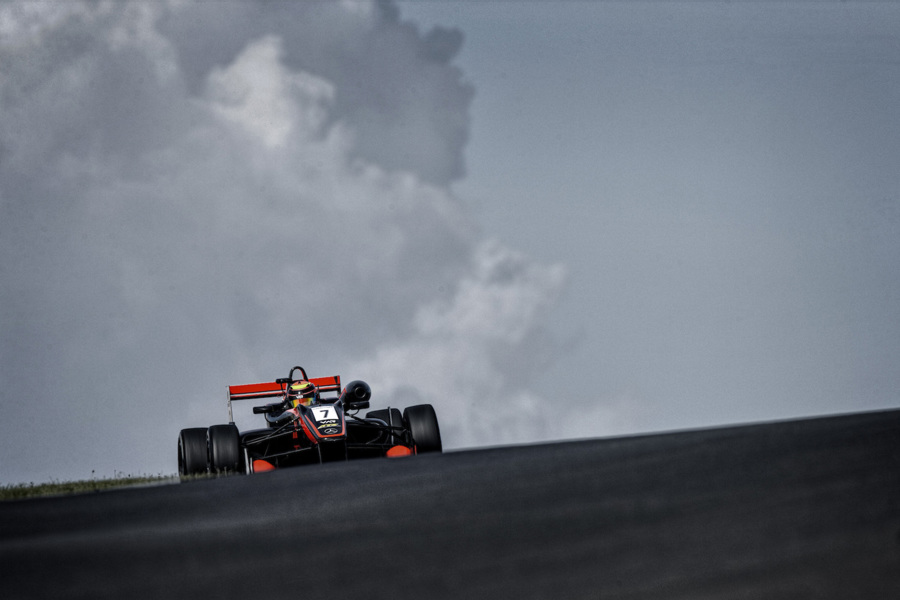 No reward for excellent speed at Masters of F3

With three of our Formula 3 drivers Van Amersfoort Racing raced at Circuit Park Zandvoort for the 26th Masters of Formula 3. Together with the F3 Grand Prix of Macau this is the most famous and most important one off Formula 3 race in the world. With pole positions for Callum Ilott in all sessions, including qualifying, all ingredients were there for a good result. In the end we missed out the podium by one position.

In a modern Formula 3 car is it very hard to overtake at Circuit Park Zandvoort. So qualification is key for success at the Masters of F3. On top of that, the best F3 drivers of the world are challenged to use tires supplied by Kuhmo. These tires are supplied to the teams at the event for the first time, so testing them prior to the famous race is prohibited and impossible.

We entered this edition of the Masters with Briton Callum Ilott, Pedro Piquet from Brazil and our French rookie Anthoine Hubert to go for the best. In both free practices Callum set the pace for the grid of 16 cars followed by Anthoine. Pedro showed he picked up the characteristics of the unknown tires very well with a 6th and 8th position.Â Â

Our experienced Briton continued his ways during the 30 minutes qualifying session for the qualifying race. Callum battled out fierce duals with Joel Eriksson, Alexander Albon and Niko Kari for the pole position and eventually came out on top. With a flying lap of 1:29.820 min. he outpaced Eriksson with a margin of 0.012 sec. Also Pedro Piquet made his mark on p6, while Anthoine Hubert grabbed 8th place.

At the start of the qualifying race Saturday afternoon pole sitter Callum was caught by surprise, and got a little confused, by an unforeseen different starting procedure. No turning on every individual lamp before fading them, but working with a 5 seconds sign, turning all light on and off. Onwards the Tarzan corner Callum had to settle for second behind Eriksson. And this remained the same for 12 laps until the checkered flag. By this result Callum assured himself of a front row start for the main race. Pedro Piquet finished sixth, Anthoine won one position at the start and ended in seventh.

From second position Callum could not make the difference at the start of the main race. The Briton had to accept that Joel Eriksson went into the lead and Callum also saw how Niko Kari got passed after a rocket start.

In the second lap Callum could not hold off the charge of Sergio Sette Camara. At the exit of the Tarzan corner the Briton was in fourth. In the remaining of the race over 25 laps Callum attempted to reclaim third place but did not find a way past his Brazilian opponent. Both Pedro Piquet and Anthoine Hubert can look back at a solid performance at the Masters, finishing sixth and seventh.

âAlthough it is our second best result ever at the Masters, it is really a pity that we did not managed to finish on the podiumâ, says Rob Niessink, CEO of Van Amersfoort Racing. âWe had the pace all weekend and Pole position is quite an achievement at the Masters of Formula 3. But in the end the position at the finish is all that matters and it simply didnât work for us this time. Now we focus again on the next European Championship round at the NÃ¼rburgring.â