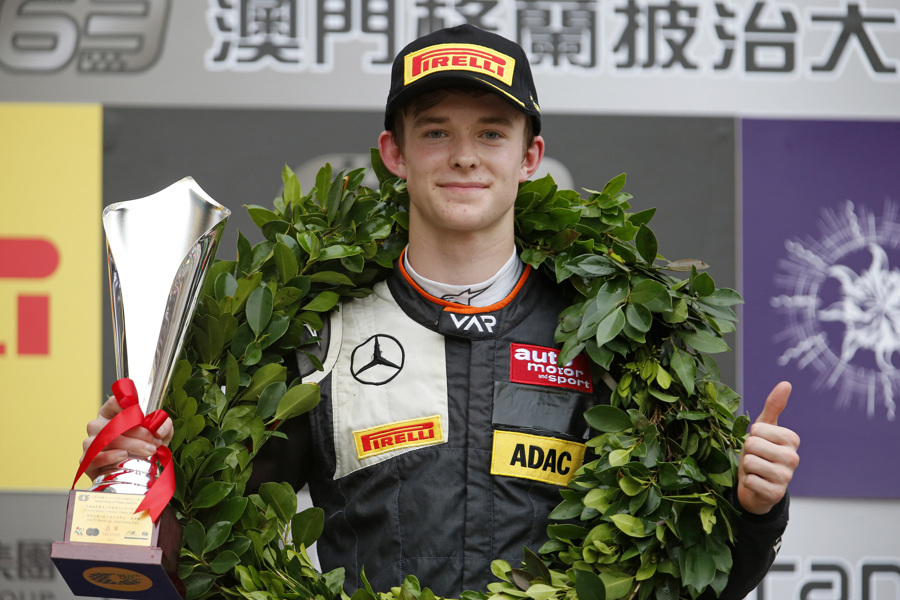 By finishing second in today’s qualification race, Van Amersfoort Racing’s British driver, Callum Ilott, secured a front row starting grid position for tomorrow’s main event, the FIA F3 World Cup at the daunting 6.12 kilometres long Guia street circuit in Macau. It is the second consecutive year in which a car from the Dutch team will be starting from the front row for the classic Formula 3 event that is the Macau Grand Prix. With his second place in the qualification race, Ilott equalled the performance by Van Amersfoort driver Charles Leclerc in last year’s event in Macau. In the ten-lap qualification race, Ilott also managed to post the fastest lap time of all the drivers.

Racing in Macau for the second year, Ilott has been in contention for a position among the front-runners throughout the weekend so far. In yesterdayâs free practice, he was fastest in the field of 29 drivers, including three former Macau F3 race winners and confirmed this strong performance by ending up second-fastest in qualifying.

From the front row of the grid, Ilott had some difficulties at the start of the qualification race, but soon restored the order and took the lead on the long straight towards the Lisboa right-hander on the opening lap. His French Van Amersfoort Racing team-mate Anthoine Hubert was less fortunate: he clipped the Armco barriers with the left rear wheel of his car coming out of the ultra-fast Mandarin kink after the start and was sidelined on the spot. Following several incidents on the opening lap, the safety car led the field around the circuit for four laps. Once racing had resumed, Ilott lost his lead to AntÃ³nio FÃ©lix da Costa under braking for Lisboa, but then successfully defended his second place and brought this result home.

âI didnât want to take any unnecessary risks, as the main race tomorrow is when it really counts. I am very happy with my second place and my front-row grid position for tomorrow, which puts us into a very good position to do well in the main race,â Ilott commented. âI know I have the pace and I am really confident for tomorrow.â

Driving the third Van Amersfoort Racing car, Brazilian Pedro Piquet put on one of the most spectacular manoeuvres of the race, taking two places in one go by overtaking David Beckmann and Sam MacLeod on the inside under braking for Lisboa on lap eight to move up from 14th to twelfth. In the remaining two laps, Piquet held on to his position and thus finished twelfth.

âFrom the first laps of the weekend Callum has been a pace-setter and today was no different.Â  You can feel his confidence with the car and his first lap manoeuvre where he went from fourth to first in one move was astonishing.Â  You can tell he relishes the challenge of the circuit.Â  As a team it is great to start from the front row for the second year in a row and as we finished second last year, we hope we can finish one place better tomorrow.â Commented Team Principal Frits van Amersfoort.

âPedro did a great job from the beginning of the weekend and kept improving his pace every time he takes to the track.Â  His move going into Lisboa corner was fantastic and by starting in twelfth tomorrow, he can have a very good result for his first presence in Macao.â Â

âAs for Anthoine he did a good job all weekend as a Macao rookie, unfortunately he hit the barrier quite hard in the first lap and his race ended there.Â  As the result of this race is the starting order for tomorrowâs Grand-Prix, it will be all steam ahead for him and see how many cars he can overtake.â Added van Amersfoort.