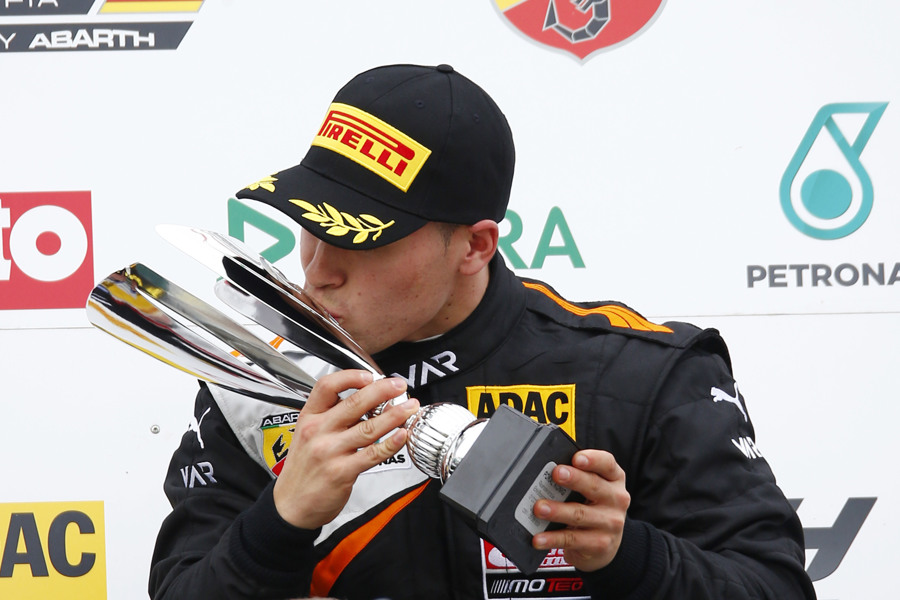 After the Sachsenring Joey Mawson still tops the rankings

We raced at the Sachsenring for the second weekend of the German ADAC Formula 4. Our Australian driver Joey Mawson scored an impressive six out of six races after being on the podium again in all three races, including a very strong win. Kami Laliberte, from Canada, rewarded his hard work with two top ten finishes, while our Swiss driver Moritz Muller-Crepon was a bit unlucky. At the Sachsenring we also welcomed the fourth driver in the Van Amersfoort Racing F4 squad: Dutchman Leonard Hoogenboom, who is endorsed by KNAF, the Dutch racing authority.

The Sachsenring, near Hohenstein-Ernstthal, is often loved by drivers for the long and high speed corners. The layout makes it both challenging and demanding for man and machine. In qualifying Joey did a solid job by putting the car fourth on the grid for the first and second race. Kami entered the top 10 twice, with P7 for race 2 as best. Moritz struggled a bit, while Leonard survived the qualifying race easily and earned his place on the grid for all three races.

Joey (20) started in fourth position and managed to gain two positions. The battle for second position with Kim Luis Schramm proved fierce. Multiple safety car interventions made the fight even more intense. Kami (16) scored his second top 10 finish of the season after a solid race. Moritz (19) gained one position and finished 16th, while Leonard gained useful experience in his first ADAC F4 event by finishing in 25th position.

Again from 4th on the grid Joey was in a intense duel with Mike David Ortmann and Kim Luis Schramm. The championship leader did the job, finished in third and was on the podium again. Three positions behind our Aussie it was Kami in sixth which marked his best personal result so far. A particular strong performance because our Canadian raced on used tires to save his last new set for the final race. Leonard also showed his racing skills, gained a lot of positions by converting his p33 on the grid into a 21th position. Moritz clashed with another driver in the fourth lap and had to retire.

Joey made it six out of six in great style. Some 12000 spectators saw how the fast Aussie clawed back from ninth position to the victory; an incredible job taking note that the race was interfered by no less than 4 safety car interventions. Because he outpaced all his rivals Joey managed to increase his lead in the championship standings to 35 points on former VAR-driver Mick Schumacher. Kami was hit by bad luck. His start from first row went well, but in one the first corners the Canadian got surprised by the hard breaking of an opponent in front and could not avoid contact. A visit to the pits for a new front wing caused him to end in 21st position. Leonard and Moritz concluded their weekend in 25th and 26th position.