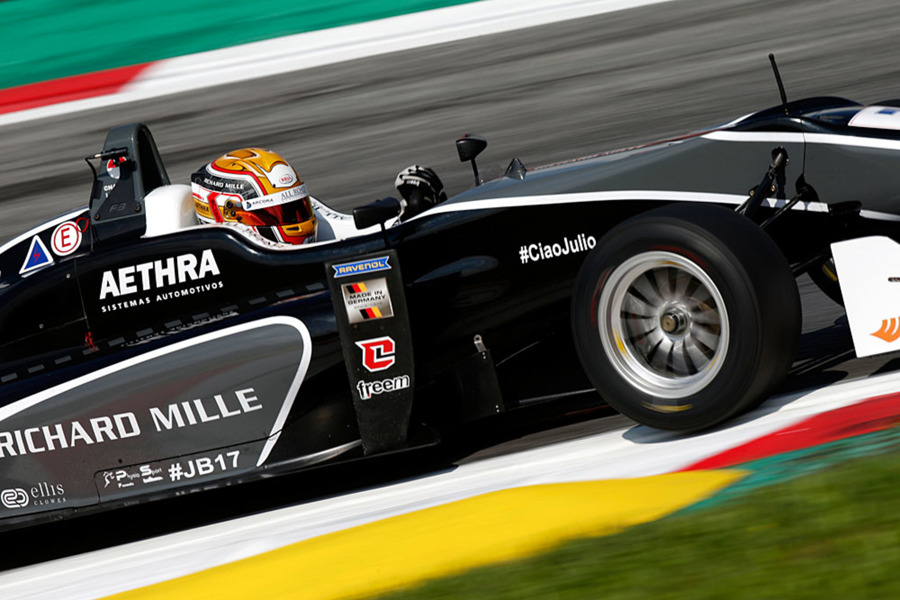 Van Amersfoort Racing encountered two different sides of the Red Bull Ring during the eight round of the FIA Formula 3 European Championship. Fast racing on the dry on saturday and and a abandoned wet race on sunday. After the adventures in Austria Charles Leclerc is still in the battle for the championship after scoring decent championship points.

Qualification is key in Formula 3 racing. Charles Leclerc had to work hard to find the flying laps. The outcome was adequate with p5 for race 1 and p6 for race 2 and 3 but our Monegasque F3 rookie may have hoped for more. The other two rookies Alessio Lorandi and Arjun Maini qualified just out of the top 20 during their first experience with this uncommon Austrian track.

At the start of the first race on saturday morning Charles had to compromise two positions. The speed was there for the 17 year old rookie, but like in many F3 races overtaking is pretty hard at the Red Bull Ring. In the finale of the race Charles managed to pass Alexander Albon, but there was no time left to hunt for the fifth position.Â

Started from 21th position Alessio Lorandi warped himself into the top 20. The former go karter found his rhythm at the former Austria Ring and showed some decent racing skills promoting Alessio into 15th place after 35 minutes of racing. Arjun Maini from India gained precious experience during the opening race. He managed to keep his 21 position.

Charles battled for fourth position almost the whole race with Lance Stroll. He tried to position his Dallara Volkswagen numerous times for a move, but could not find a weak point in the defense of his Canadian opponent. In the closing laps our title contender fended of Alexander Albon to settle for fifth position.

Arjun showed a strong performance in the second race on saturday. In a race that was interfered by the safety car once the Indian newcomer managed to gain 7 positions promoting him to 15th position. After overtaking a number of other competitors, Alessio had to retire in the last lap with a bend suspension after a collision. He was classified 28th.

The start of the race on sunday was postponed for two hours due to heavy rain. When the race eventually got underway behind the safety car, it was red flagged after three laps. Twenty minutes later the race was resumed, again behind the safety car before the officials throw out the red flag definitely.

Charles ended the float in the same position he started: sixth. Alessio managed to win one position in 20th place, Arjun started 24th and was classified 22th. Half points were granted because of the curtailed race. Charles collected a solid amount of 24 points, but could not prevent that Felix Rosenqvist took over second place in the standings. Our rookie is now third, 29 points behind leader Antonio Giovinazzi.Â