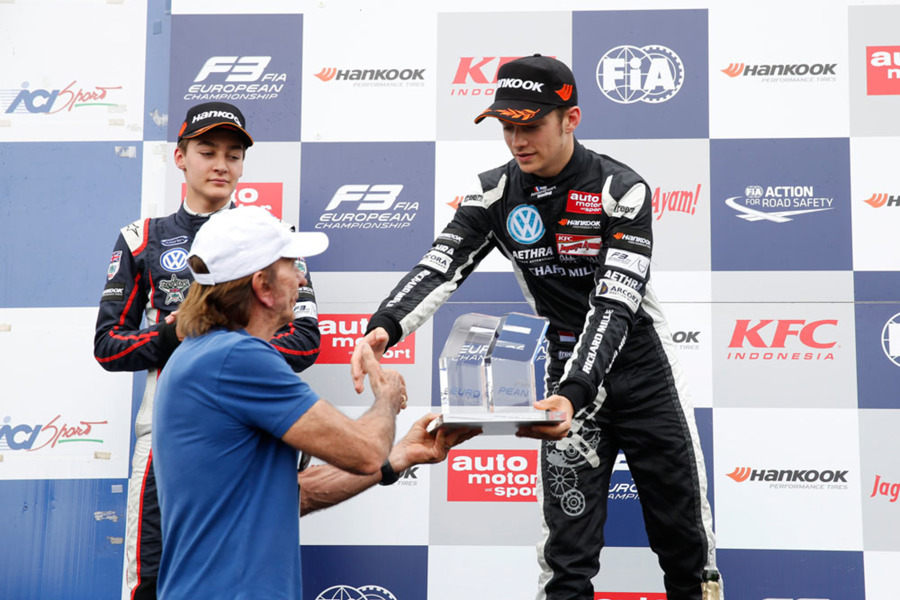 Short on reward at the temple of speed

Racing at Monza is never boring, but the 4th weekend of the FIA Formula 3 European Championship was sometimes a bit to dynamic. We went home with one podium result for Charles Leclerc and a point scoring finish for Arjun Maini. Not what we deserved considering the excellent speed. But: after all the smoke had gone Charles is still second in the standings and both Arjun and Alessio Lorandi showed lots of decent race craft.

After the excellent results in the test days at Monza (Charles proved the fastest of all), we travelled to the famous Italian track in good spirit. But racing is never easy as we found out in qualifying. We went into the dance for pole position in the first qualifying. Charles searched for the slipstream but had to do it all on his own without the drag of the car in front.Â

Result: p10 for Charles, P13 Maini and P18 for Lorandi. So we had to chance the strategy and some settings on the car. A solid performance by Charles brought two times P2 on the time sheets. Main and Lorandi looked for a slip stream during the session, but found it difficult to merge the fastest sector times into two fast laps. Resulting in P26 and p20 for our Indian driver and p21 and p19 for our Italian racer at his home track.

The opening race showed some classic Monza action with a train of slipstreaming F3 cars for almost 12 laps. Charles Leclerc showed his toughness by climbing up from 10th place to a decent 5th place. Our Monegasque aimed for the podium in the final lap trying to pass Raoul Hyman, but was forced of the track giving championship leader Antonio Giovinazzi the opportunity to pass him. Charles impressed with the fastest race lap: 0,3 sec. clear!

Alessio had to race with an extra handicap. A engine change after the Monza testing meant he received a 10 place penalty. So the former go karter entered the race from 27th position. He made up lost ground in a very impressive way. Alessio finished in 18th place. A good result taken he was pushed of the track during the race and had to fight his way up two times practically.

Arjun converted his 13th starting position in a point scoring finish after a decent race. The driver from India gained three position and saw the flag in 10th position. As a reward Arjun earned a championship point. A strong result in his first ever F3 race on the Monza track.Â

With a start from first row Charles had a good opportunity to aim for the podium. In the rush towards the first corner the number two in the standings made contact with Jake Dennis, bending the Monegasque's suspension and leading him to park on the grass on the exit of the chicane, bringing out the safety car for the first time.

After the first race we investigated the data of Alessioâs car and decided to change the engine again. During his off track moment he gathered so much grass in the side pots that it caused the engine to overheat. The unpleasant result was yet another 10 position penalty for our Italian younster. So Alessio had to start from dead last in the remaining races.Â

Although the difficult mission - also considered the many crashes en two safety car interferences - Alessio managed to finish in a very inspiring 13th position. Arjun also fought his way up front in the chaotic race, bringing him up to 20th spot.Â

After the big and horrifying crashes in the second race, race control took all the F3 youngsters apart for an extra briefing. The drivers were told that in the event of a crash caused by bad driving, the race was to continue under the safety car until 75 per cent distance, the point at which maximum points can be awarded, was reached.

In real life it got even more strange. After the second crash causing another safety car interference, the race director choose to abandon the range after 8 laps. The strangest race of the season meant a podium finish by Charles in third spot, one place in front of championship leader Antonio Giovinazzi. Which was good news for the standings. Alessio en Arjun both managed to pass some competitors in the ultra short race.

Championship standings after round 4