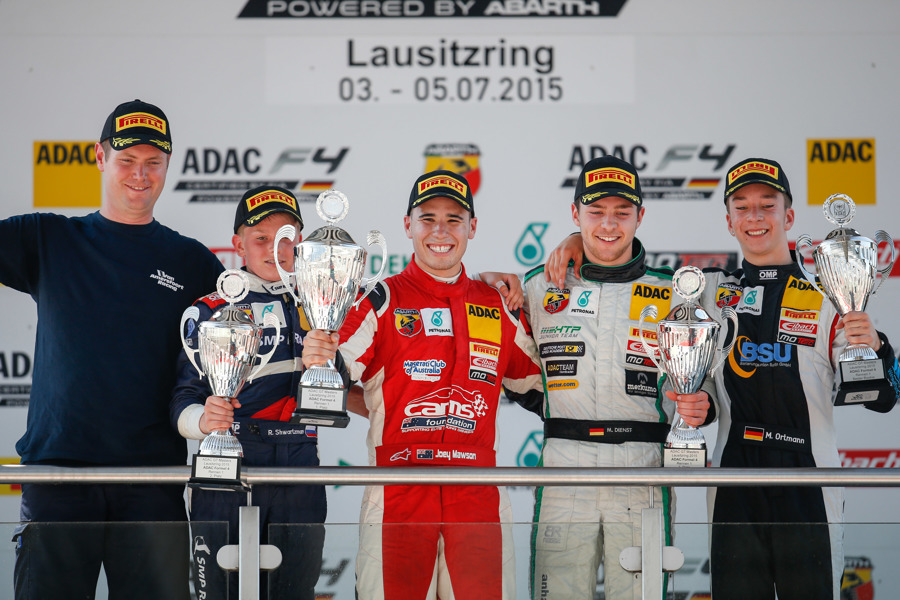 Encouraging breakthrough at the Lausitzring

Van Amersfoort Racing reached mid season in the ADAC Formula 4 championship with a big smile. Joey Mawson performed outstanding in almost tropical temperatures at the Eurospeedway Lausitzring. Our fast Aussie scored one victory and two second places, bringing the runner-up back into the title chase definitely. Rewarding was also the point scoring finish of Harrison Newey in the third and final race.

The hard work during the test session prior to the fourth race weekend of the ADAC High Speed Academy paid off for us in qualifying. Both Joey (p2) and Harrison (p9) settled into the top 10 for race 1. Mick claimed 10th fastest time in qualifying group A, but was not permitted to start the first race by the race director after not reacting rapidly enough to a red flag. He was among four other drivers including the championship leader.

Starting from second position our fast Aussie directly made his intensions clear. After a rocket start Joey passed Marvin Dienst and took over the lead to never let go. Also a safety car intervention did not effect his hegemony. After 20 laps Joey Mawson (19) claimed his second victory of the season in impressive style.Â

Our Aussie also caught up last ground for the standings since championship leader Joel Ericsson did not start the race. Harrison Newey struggled to find his rhythm on the first race of the weekend and finished in 16th spot after his 9th place on the grid.Â

Saturday afternoon Joey Mawson was on the podium again. This time to celebrate his runner-up result. It could even have been a victory. Unfortunately our fast Australian went a little to wide after the safety car deployed in the last phase of the race, giving Eriksson just enough space to take over the lead. Nevertheless Joey showed great determination for the title bid.

Mick Schumacher (15) overcame his disappointment for missing the first race by securing 16th position. A performance which shows both determination and race craft because Mick was pushed into the grass in the opening lap and had to fight his way up from very last position! Briton Harrison Newey had to park his car in the pits after a turbo problem shortly after the start. Bad luck for him.

Save the best for last. Joey Mawson crowned his progress in the first half of the season by finishing on the podium for the fourth time in a row. The Australian started from 10th position, was in third position after the first corner and caught the flag in second position. Giving Joey a total points score of 61 and closing to gap on leader Joel Ericsson from 38 to only four points.Â

It was definitely not the weekend of Mick Schumacher. His last race ended only a few 100 metres after the start when he was hit from behind by another car. A bent rear suspension forced the German rookie (16) to retire. Harrison Newey got to grips with the Lausitzring this last race. He battled his way-up into the points, gaining five postions after being tenth on the grid. Our young Briton has all the abilities to be a top ten regular in the second half of the season.

Van Amersfoort Racing starts the summer break in good spirit after the strongest performance of the season by Joey Mawson. We are confident that he will be a serious title contender in the second half of the season, where we are going to visit the famous German four: NÃ¼rburgring, Sachsenring, Oschersleben and the finale at Hockenheim.Â