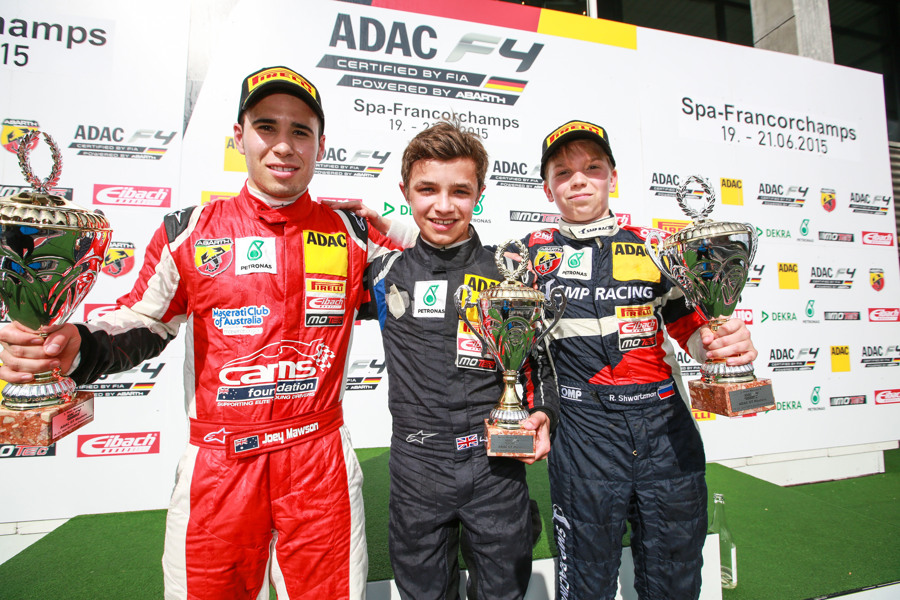 Climbing up to the top at Spa-Francorchamps

The youngsters of the Van Amersfoort Racing F4 team showed their talents at the famous Spa-Francorchamps Grand Prix circuit this weekend. Joey Mawson (19) scored decent championship points during the third meeting of the ADAC Formula 4 championship, with a second place podium result in the final race as a high. Our Aussie is now runner up in the standings. Briton Harrison Newey (16) marked his F4 Spa racing debut with a personal best in the second race: fifth. Also Mick Schumacher (16) found the speed, but misfortune prevented our German Rookie scoring points.

Joey, Harrison and Mick could hardly wait to race at Spa-Francorchamps. Not only the longest track (7.004 km) on the calendar, but also one with an unique lay-out. Include the ever mysterious weather and you have a cocktail which is loved by every true racing driver on the planet.

The first race of every weekend is fairly important because the result determines the starting order of the third race (with reverse grid for the top 10). Harrison tasted the bitter fruit of this, after the Briton was hit, spun and had to retire because the fire extinguisher went off with the result he had to retire.

Joey gained 3 positions in a clean run, giving him a fifth place adding solid championship points. And: the Australian assured himself of a good starting position for the final race on Sunday. Mick Schumacher looked on his way to a top 10 result, after starting in 15th position. In the last lap the young German went into the grass at Les Combes shortly and saw how four competitors passed him.

Harrison was on a mission on Sunday during the second race in the Ardennes. Starting from P8 he brought his car home in fifth position, marking his personal best result of the season so far!Â

Joey continued his hunt for points converting his 10th starting position into a strong 7th position. The busiest VAR-driver must have been Mick. He started his mission from behind (P27), middle in the center of the rumble, but fought his way up. After passing many opponents his race ended in 15th spot, gaining 12 positions.

Joey saved best for last. In the final battle of Spa he proved fast and smart at the same time. After the start our Australian racer circumvented a spun car in front of him and worked his way up with several clear overtaking maneuvers. If the safety car would not have interfered, Joey could have battled for the victory. His second place marked his third podium result this season and promoted him as the runner in the championship standings.

Both Harrison and Mick were unlucky this time. Our Briton came from P33 and was on course for a top 10 result until a a collision with another competitor and a bend suspension made Harrison drop back to 16th spot. Mick battled himself into the top 10 until he hit the barriers, had to get a new front wing and finished the eventful race as 34th.