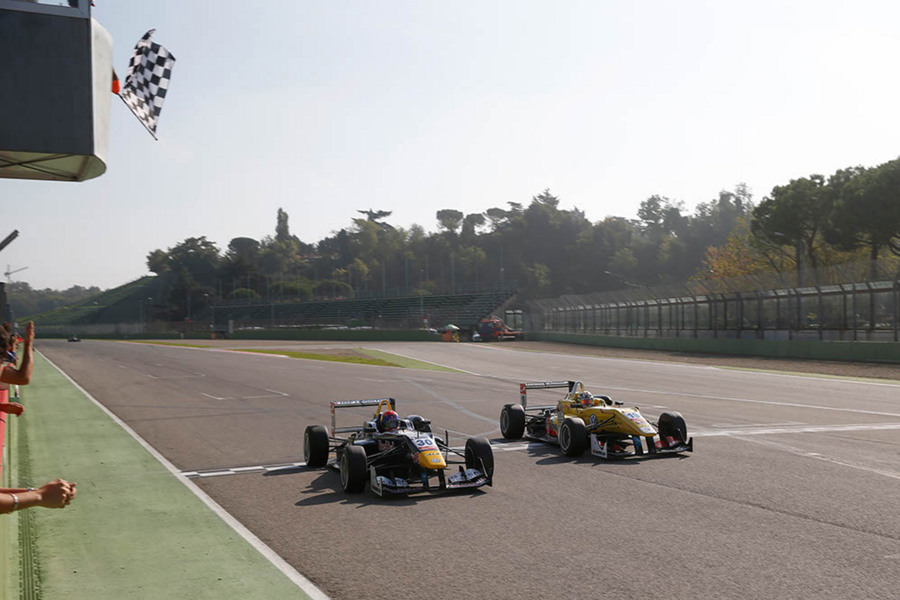 Friday started badly for us, as Jules had to change his engine. This meant he too incurred a ten place grid penalty lasting three races, just like Max had done during the previous round at the NÃ¼rburgring. Qualifying pace was also a bit below par, as Max only managed Q5 while he had been second in the first of morning free practice. Gustavo got Q14 and Jules got Q16.

The first race turned into somewhat of a disaster. With Gustavo 13th on the grid, Max 15th and Jules second to last due to their respective engine change penalties, it was always going to be a struggle. However, after a great start and some positions gained, Max tried a move on the outside of Jake Dennis (Carlin) in Tamburello and ran wide. This damaged his rear suspension. On top of that, he was pushed into the gravel a couple of laps later by Antonio Fuoco (Prema Powerteam) after the latter ran into the back of his car. Being outside of the points at this stage, the Dutchman tried to recover with three laps to go but then hit Roy Nissany (MÃ¼cke) with his front left wheel. The damage was too great to continue the race. Both our other cars also retired, Jules on lap seven and Gustavo on lap 16. Esteban Ocon (Prema Powerteam) took a lights to flag victory to strengthen his grasp on the title.

The sun then came out for Van Amersfoort Racing on Saturday afternoon though, as Max took revenge in second qualifying by grabbing two commanding pole positions. Gustavo qualified in 19th and 16th while Jules got a double 22nd for his efforts.

Race two on Sunday morning was an impressive show of driving skill. Jules finished 15th from 22nd on the grid, while having to recover from a spin into the gravel in the opening stages. Gustavo drove himself into the final pointsâ position (10th) from an 18th starting position with an astute drive. However, all eyes were on Max who went from eleventh to second place behind race winner Tom Blomqvist (Yagonya Ayam). His start was not perfect, but he was the quickest on track throughout the race, overtaking the cars ahead one by one. On lap six, the Toro Rosso ace was helped by a safety car that brought the pack together, but it was his overtaking that stood out. Especially the way he blitzed past Ocon on the outside of Tamburello, in a similar fashion to the move that failed on Dennis the day before, was impressive. He then showed great determination to catch second placed Antonio Giovinazzi (Yagonya Ayam) and literally overtake him as the chequered flag fell.

Max finally got to start from pole in race three, and he converted it into a well-deserved ninth victory of the season. Antonio Fuoco took the lead at the start, when the Dutchman briefly stalled, but he retook it after the first safety car situation. Not much changed at the front after that, although the race behind the leaders was very exciting with lots of overtaking and a number of crashes. With his win, Max recaptured second place in the driverâs standings from Blomqvist. Esteban Ocon secured enough points with his third place to win the FIA Formula 3 European Championship. VAR congratulates the Frenchman with his achievement. Gustavo Menezes had an early scare when he had to go into the gravel, but he managed to keep running. The American then managed to score another point by finishing in tenth place. Jules finished his last race a respectable 14th.

Asked about his weekend, Max said that âit was difficult on Friday, but we changed something on the car for Saturday. From there everything was great, the car but also the engine was quick. Unfortunately I made a mistake in race one but from qualifying two onwards it was perfect.â

The final race of the season is next weekend at Hockenheim, we hope to see many Dutch fans there.