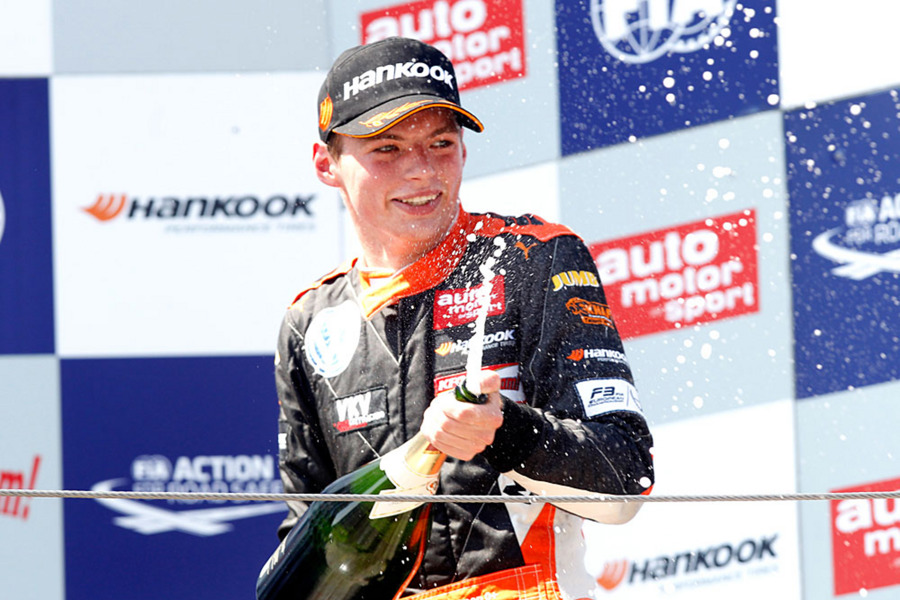 Max Verstappen scored two podiums at the Moscow Raceway with a third and second place, while Gustavo Menezes also scored two points for Van Amersfoort Racing with two tenth places. The FIA European F3 Championship’s first visit to Russia was therefore reasonably successful for VAR, but the gap in the championship between Max and Esteban Ocon (Prema Powerteam) was increased.

On a very chilly Friday with overcast skies and a strong wind, Jules secured a seasonal best qualifying by taking P8. Max achieved the fourth fastest time whereas Gustavo struggled slightly and got P13. Fortunately, the sunshine returned on Saturday and so did Max to the podium positions and Gustavo to the points.

At the start, all VAR drivers managed to maintain their positions. Jules was seventh on the grid because Jake Dennis (Carlin) had been given a five place grid penalty. He was under pressure throughout the race, had to concede several positions and finished twelfth. Gustavo on the other hand, overtook several others to finish tenth. The standout moment of Maxâs race was a neat overtake on the inside of Tom Blomqvist (Yagonya Ayam) in the final corner of lap two. The gap to front runners Esteban Ocon and Jordan King (Carlin) of 2.5 seconds then proved too big, although he managed to get to within 0.4 s of King in the final laps.

Sunday was an equally hot day at the Raceway. After having qualified 4th, 13thÂ and 15th, the second race of the weekend was disappointing for VAR. Max, having started and retained P4, had to retire due to an alternator failure on lap twelve. Gustavo finished tenth after overtaking two cars at the start and two more later in the race. Jules struggled early on in the race and lost a position, but found his feet in the second half and retook his place to finish 13thÂ overall.

In the last of the Russian races, VAR was further forward on the starting grid with a third, ninth and 13thÂ starting berth for Max, Gustavo and Jules respectively. Max had to fight off Antonio Fuoco (Prema Powerteam) to keep third place and did so to start what would be a strong race. The other two VAR drivers had less luck this race. Jules suffered bad luck at the start when a collision behind him in turn three caused the car trailing him to clip his right rear wheel and throw him into a spin. He found himself at the back, but could close the gap due to the safety car situation resulting from the turn three debris. Gustavo started brightly, but had to come in for a nose change after the restart, which dropped him to the back as well.

A few laps after the restart, Max inherited second place when Tom Blomqvist was penalised for making a jump start. He was closing the gap to race leader Esteban Ocon steadily after that, but got some help from a second safety car to find himself right on Oconâs tail. Gustavo and Jules meanwhile, were moving back up the field. Gustavo had to start over again though, after one of his overtakes to move up the order was penalised for leaving the track. To make matters worse, Jules also had to start over again after damaging his front wing when fighting for position. He eventually finished 13thÂ with Gustavo just one place ahead.

The second safety car situation ended with just one lap to go, meaning Max had only two real chances to take the win. He seemed to have taken it immediately after the restart. When Ocon pulled away he dived into his slipstream and got a great toe. A lunge on the outside had seemed successful, but the Dutchman just overshot the braking point. He ran wide and his French rival could come back on the inside. He finished second to take his second well deserved trophy of the weekend.

Max was obviously pleased after the last race. "We had a hard weekend, but I was especially happy with the last race. We found a good setup for the last race and we had good speed. With the overtake I tried on Esteban [Ocon] in the last lap, I just braked a bit too late and ran wide unfortunately."Â  Â Â Â

Van Amersfoort Racing will race at the Red Bull Ring next on the 1stÂ to 3rdÂ of August 2014 for round eight of the FIA European F3 Championship.