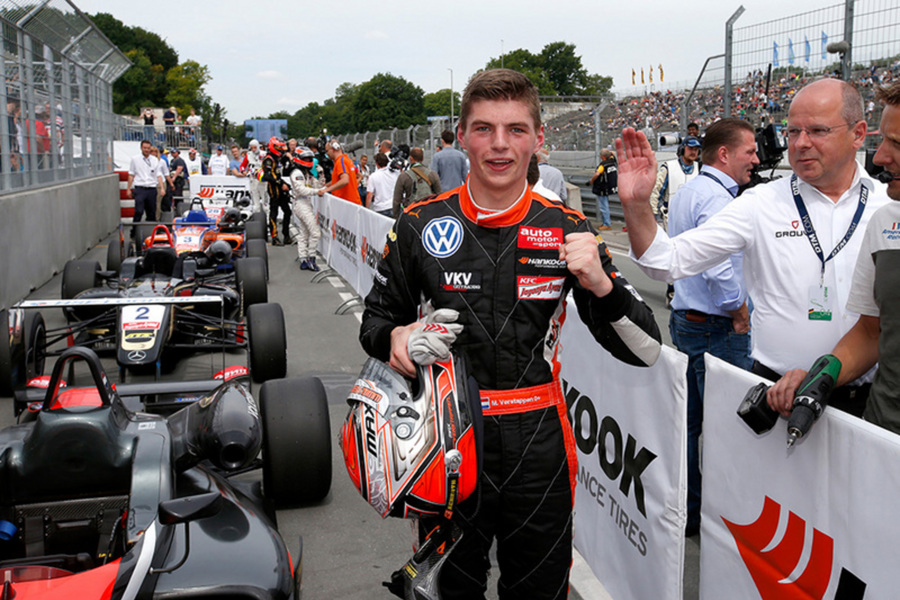 Another hat trick for Max at the Norisring

Max Verstappen completed a second hat trick of wins in the sixth round of the FIA European Formula 3 Championship at the Norisring. Gustavo Menezes also managed two points finishes for Van Amersfoort Racing as the team moved up to third in the team championship standings.

Max was already fastest during free practice with Jules a promising ninth. Gustavo was a bit further down the order, but he had missed the first 20 minutes of the second session because his break discs were being changed. Qualifying was an extremely tight affair later that afternoon. Only 0.011 seconds separated first from third, and sadly for us Max was third with Felix Rosenqvist (MÃ¼cke Motorsport) taking pole. Gustavo qualified 8th, coming up 0.007 short for 6th and Jules got P12.

At lights out in the first race, Max had a poor start and was down in fifth place after the first hairpin. He quickly recovered to regain third. Gustavo dropped to ninth while Jules damaged his nose in the bustle. He pitted for a new one and continued his race from the back. After the first safety car situation of the race, Max overtook Rosenqvist and then Esteban Ocon (Prema Powerteam) to take the lead. Gustavo was eliminated shortly after when he collided with Antonio Fuoco (Prema Powerteam) as the Italian tried to overtake. Max held off Ocon despite several safety car situations to take his fourth consecutive win. Jules retired after a collision in the closing stages. Â

Later that afternoon, qualifying was influenced by the first shower of the weekend. All cars dashed out at the off to set a lap time before the real rain came, and Max came out on top for both races on Sunday to record his first official pole positions. Gustavo and Jules qualified 13thÂ and 14thÂ respectively, but would be slightly further back in race three. After the rain truly started and interrupted the fight for pole, all VAR drivers went out on wets to get a feel of the track under wet conditions. With the expected rain on Sunday, this seemed a sensible thing to do.

And how it poured on Sunday. The rain started at around 08:30 am, but stopped an hour before race two. All VAR drivers switched back to slicks in the pre-start area, since the track was drying up quickly. The whole grid was nervous about the weather, but at the start Max sped off into the lead. Behind him in the chaos of turn one, Julesâs right rear wheel was hit by another carâs left front. He was forced to retire with a broken push rod. Gustavo stayed out of trouble, as he did the entire race, and eventually drove to a tenth place to earn himself a point.

At the halfway stage of the race, the rain intensified and race control stopped the race. All cars switched to wet weather tyres and the race was resumed behind the safety car. In the rain, Max was simply unbeatable as he opened up a big gap to deservedly win the race. Behind Max, Esteban Ocon took out Tom Blomqvist (Jagonya Ayam) after the latter tried to overtake him. He was later penalised for a dangerous manoeuvre with a drive through penalty. This meant two of Maxâs rivals did not score any points in the second race.

With the speed Max showcased in race two, it seemed inevitable that the last race of the weekend would result in anything other than a third victory. Indeed, Max was dominant and completed his second hat trick of the season, moving to second place in the driverâs standings. After the last race he said: âIt could not have been better. The car was good and the engine was good. Three wins and two poles, just fantastic.â

Maxâs third victory was made all the sweeter by a great fifth place for Gustavo Menezes. Having started P17, he found himself in P6 after slipping through a first corner traffic jam. A gutsy pass by outbraking Sean Gelael (Jagonya Ayam) secured P5 for the American.

Van Amersfoort Racing will next race in the FIA European championship at the Moscow Raceway on the 11thÂ till 13thÂ of July. However, next weekend we have the Zandvoort Masters to come.